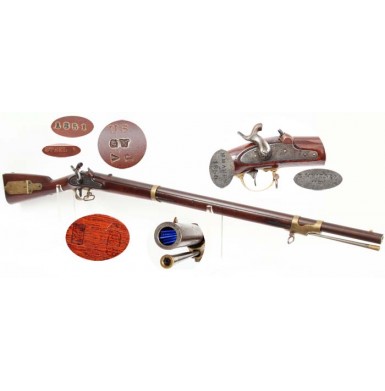 This is an outstanding, unaltered example of a US M-1841 Mississippi Rifle. The M-1841 was the first general issue percussion long arm to be adopted by the US military. The rifle was adopted in 1841 and production began in 1843. As had always been the tradition since the inception of the US military, the military rifle of the early to mid 19th century was a special purpose arm, intended for limited issue and use. The rifle was not designed to accept a bayonet, as the tactics of the time called for riflemen to be deployed as skirmishers or to take long range shots at specific targets of opportunity (such as a officers, artillery crews, etc.) and then retreat behind the main infantry battle line prior to an assault, harassing the enemy from the flanks. The US M-1841 Rifle earned the sobriquet “Mississippi Rifle” in the hands of the 1st Mississippi Rifles during the Mexican War. The regiment was lead by future US Secretary of War, and later Confederate States President, Colonel Jefferson Davis of Mississippi. The riflemen under his command turned in yeoman’s performances at the battles of Monterrey (September 1846) and Buena Vista (February 1847) and from that time on, the gun was known as the “Mississippi Rifle”. The rifle was produced with a 33”, .54 caliber barrel that was rifled with 7 deep grooves with a moderate rate of twist of 1:72”. The barrel was secured to the rifle with a tang screw and two brass barrel bands, the upper of which was double-strapped. The rifle was designed to fire a patched round ball of .535” diameter. The rifle had an overall length of 48 ““ and weighed 9 pounds, 12 ounces. The rifles were produced with a lacquer brown finished barrel, a color case hardened lock and hammer, brass furniture and screws that were fire blued during their drawing process. The furniture was of polished brass, with a large brass patchbox in the obverse of the buttstock for the storage of lubricated patches and tools for the maintenance of the rifle. The rudimentary fixed notch rear sight was optimized for a point of aim / point of impact of 50 yards, but proved to be effective out to 300-400 yards, with a number of period accounts referring to the successful use of the rifles at those distances, especially against Native American combatants in the west. With the adoption of an expanding base conical projectile (Mini” style) for the rifle in 1855, a variety of experimental alterations were tried in an attempt to find a more effective rear sight design. At the same time, many of the rifles were additionally altered to accept bayonets, mostly of the saber variety. As the decade of the 1850’s ended, and the new .58 Mini” ammunition became the standard for use by the US military, many of the M-1841 rifles in store at the various national and state arsenals were altered to the new caliber and were also re-rifled. At this time even more of the guns were altered to accept bayonets, with some of the alterations being adaptations to use socket bayonets. At Harpers Ferry alone, some 9,800 M-1841 rifles were altered for use with expanding base, conical ammunition of either .54 or .58 caliber. In the months leading up to the opening of Civil War hostilities, Secretary of War John B Floyd ordered that 10,000 .54 caliber M-1841 Rifles be delivered to the southern arsenals at Fayetteville, NC, Charleston, SC, Augusta, GA, Mount Vernon, AL and Baton Rouge, LA, with each location receiving 2,000 of the rifles. Floyd was ardent supporter of the south and wanted to help make sure that arms would be available for the coming conflict, whcih he felt was inevitable. As the Civil War began, even more M-1841 rifles were altered to .58 caliber in both the North and South, further reducing the number of arms remaining in their original .54 configuration. During the production of the US M-1841 Rifle from 1843 to 1855, some 91,796 were produced. Of those, the National Armory at Harpers Ferry produced 25,296 of the rifles (roughly 28%) and the balance of the 66,500 guns being produced by contractors for the US government. Eli Whitney Jr. produced 26,500 (about 29% of total production), Robbins & Lawrence produced 15,000 (16%), E. Remington & Sons produced 10,000 (11%), Robbins, Kendall & Lawrence also produced 10,000 (11%) and Tryon produced only 5,000 (about 5%). Due to the large number of arms that were altered and adapted to the new caliber and to accept bayonets from the mid-1850’s through the Civil War, unaltered M-1841 rifles can be difficult to find on the collector market today. Additionally, due to the heavy use that nearly every one of these rifles saw during the American Civil War high condition examples are extremely scarce today.

This particular US M-1841 Rifle is in about EXCELELNT condition and was produced by the Whitney Arms Company of New Haven, CT. The rifle is marked on the lock in two horizontal lines, forward of the hammer: E. WHITNEY / US and in two vertical lines behind the hammer: N HAVEN / 1850. The lock markings are stronger than those encountered on many Whitney rifles, which tend to have weakly stamped locks. The lock retains about 40% of its original color case hardened finish, which has faded to a dusky gray color with some lightly scattered patches of the original purple, blue and brown colors still visible. The lock is crisp, fully functional and mechanically excellent. The reverse of the hammer nose is marked with the sub-inspector initial W. The barrel tang is crisply marked with the date 1851, one year off from the lock date, which is not uncommon. The use of existing stocks of already assembled or manufactured parts makes the mismatching of a lock and barrel date by one year a fairly common occurrence. The barrel is marked at the breech with the US proof and inspector marks: US / GW / V P. The left flat of the breech is deeply stamped STEEL and is marked with the sub-inspector initial B. The barrel retains about %-90%+ of its original lacquered brown finish, with the only loss due to some minor wear along the high and shard edges of the barrel and some minor fading and light wear from handling along the usual points of contact. The barrel is smooth throughout, with only some lightly oxidized surface freckling present near the breech, indicating that the rifle was probably fired at least a few times during its service life. The bore of the rifle is in about FINE condition. The bore remains in the original, unaltered .54 caliber and has excellent 7-groove, round ball rifling. The bore is mostly bright, with only some light scattered pitting visible along the length of the barrel in the deep grooves of the rifling. A pair of very good inspectors cartouches are present on the stock flat, opposite the lock. One is a script WAT in an oval, the mark for US Ordnance Department inspector Captain William Anderson Thornton. The other mark appears to be the script SK, for Armory Sub Inspector Samuel Knowles. The brass buttplate is marked on the top with a small US to the rear of the buttplate screw. The brass furniture has a mellow golden patina that is quite attractive. All of the wood and hardware mounting screws retain between 30% and 70% of their original blued finish with some fading, thinning and dulling. The two lock mounting screws retain the least finish of all of the screw heads. The screw heads are mostly crisp, with only some minor slot wear noted on a couple of the screws. The two barrel band retention springs both retain about 80%+ of their original fire blued finish as well. The rifle retains its original fixed rear sight, and its original brass blade front sight. The gun retains both of its original sling swivels as well. The correct, original production brass tipped ramrod is in place in the channel under the barrel. The rod is full length and retains excellent threads on the end. The stock is in about NEAR EXCELLENT condition. The stock is full length and has no breaks, cracks or repairs noted. The interior of the patch box is marked with the name HOWARD GRI” (possibly Griffin) in ink. It is not clear if this name is period or the name of some subsequent owner of the rifle. It might be worth researching the name to try to determine if it is a Civil War soldier or not. There is some very minor wood loss at the edges of the ramrod channel, immediately behind the upper barrel band, but this is insignificant and the result of the rammer being drawn and removed while the rifle was in service. The area of loss is worn smooth with age, suggesting that the loss is very old. The stock is extremely crisp and sharp throughout, with no indications of having been sanded at any point in time. All of the edges remain relatively sharp and well defined and all of the markings are very good. Any minor rounding or loss to sharp edges is the result of actual use and handling. The wood to metal fit of the rifle is outstanding throughout. The stock does show a handful of minor bumps, dings, and rubs from light use and handling during the period of use, but shows no abuse or significant wear.

Overall this is simply an outstanding example of the always desirable and extremely attractive US M-1841 Mississippi Rifle, as produced on contract by Eli Whitney Jr. It is interesting to note that Whitney lamented that due to the low price paid by the government for the guns, and the huge expenses he incurred in the set up and tooling for production of the rifles, that he had spent “thirteen of his best years” in the production of the M-1841 and “never really made a profit”. Of course Whitney subsequently put the tooling and machinery to good use during the American Civil War, producing thousands of first class arms for the US government and thousands more of his very profitable “Good & Serviceable” arms for state and militia contracts. While Whitney produced the largest number of “Mississippi Rifles”, their guns also had the highest incidence of modification and alteration in the years just prior to, and right after, the beginning of the American Civil War. As such, unaltered examples are very scarce, especially in this outstanding level of preservation. For any collector of 19th century American martial long arms, the US M-1841 Mississippi Rifle is an essential part of the collection. They were the first official US military percussion long arms and earned a reputation for reliability and accuracy during the Mexican War. The guns saw even more service during the Civil War and fought on both sides. This is simply an outstanding condition rifle that is absolutely righteous and you will be very proud to add to your collection and display.