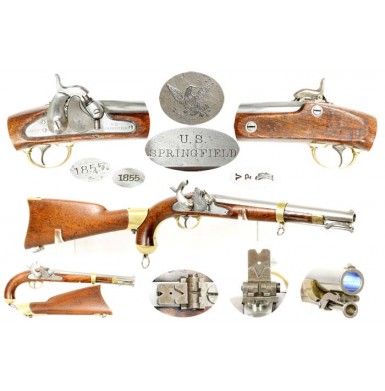 This is a FINE condition example of the US M1855 Pistol Carbine. The Pistol Carbine was a classic example of the pre-Civil War US Ordnance Department’s inability to be forward thinkers and look at current and emerging technology when it came to firearms design. Even though much more advanced breech loading carbines and revolvers were already in use by the US military, like the Jenks Naval Carbine, the Sharps carbine and various Colt’s patent revolvers, the Ordnance Department chose a design that was clearly a step backwards “ a single shot, muzzleloading pistol carbine with a detachable shoulder stock. The end result was a weapon that was neither fish nor fowl “ an oversized and ungainly pistol or an overly short-barreled carbine with a shaky attachable stock. The Ordnance Department planned for the weapon to be issued to the cavalry and used as a pistol when mounted and a carbine when dismounted. The gun was to be carried in the typical pommel holsters of the day, with the pistol in one and the butt stock in the other. US Secretary of War Jefferson Davis approved the gun on July 5, 1855, along with the rest of the M1855 family of firearms. Since the Federal Government operated on a fiscal year system, the gun was actually adopted 5 days into fiscal year 1856. This explains why Ordnance Department records show no deliveries in to store of M1855 pistol carbines in 1855. The armories also maintained their records and booking keeping on a fiscal year basis, but dated their manufacturing (locks, barrels, etc.) on a calendar year basis. The Springfield Armory delivered a total of 4,021 of the pistol carbines. In fiscal year 1856 a total of 2,710 were delivered into stores and in fiscal year 1857 an additional 1,311 were delivered. The first issues were to a squadron of cavalry in both the 1st and 2nd US Cavalry Regiments. The guns were far from successful or popular in the field, and no further pistol-carbines were manufactured after fiscal year 1857. In 1858, the pistol-carbine was also tentatively issued to some light artillery units for trial, with the thinking that is might be a handy weapon for those troops. However, it was not popular or successful in that role either. Eventually, the Ordnance Department finally saw a glimpse of the future and proceeded to issue revolving pistols to the cavalry, and undertook additional trials of breech loading carbines. As of October 1860, some 3,022 of the M1855 Pistol Carbines were in storage at various arsenals, with only 992 being in the field. However, the outbreak of the American Civil War created such a pressing need for small arms that most of these pistol carbines were issued, at least on a temporary basis, and according to George Moller’s research, 11 different companies of US cavalry were completely or partially armed with the M1855 Pistol Carbine during the first part of the Civil War. Eventually, the guns were withdrawn from service as better weapons became available. Despite the fact that the gun was obsolete from the day it was adopted, as late as 1880 some of the Pistol Carbines were still in government stores, as some 332 were sold at auction as surplus from the New York Arsenal in that year.

The US M1855 Pistol Carbine has the dubious honor of being the last single-shot percussion handgun to be issued to the US military, at a time when percussion revolvers were the standard of the day, and metallic cartridge revolvers were beginning to emerge. The gun was just under 18” in overall length with a 12” .58 caliber barrel, rifled with three grooves. The gun used a reduced sized version of the Maynard automated “tape primer” lock that was also used on both the M1855 Rifle and Rifle Musket. Although all previous sing-shot pistols had utilized a round ball projectile, the new M1855 Pistol Carbine used the expanding base, .58 conical projectile used in the US M1855 Rifle, Rifle Musket and Carbine. The only substantial difference was a reduction in the powder load from 60 grains for the longarms to 40 grains for the pistol carbine. Like most arms produced at the National Armories during that time frame, the gun was polished to “National Armory Bright”. It was mounted with brass furniture and a walnut stock. The butt of the pistol carbine had a large swivel ring, allowing either a lanyard or carbine sling to be attached. A sling swivel was also mounted on the bottom of the single brass barrel band, as well as in the toe line of the detachable buttstock. The pistol featured a captive ramrod that was retained by a swinging link system, similar to the pattern used on the US M1842 pistol and the earlier M1847 Cavalry Carbine. Why this system was adopted, when it had been universally hated on the M1847 Carbine is somewhat of a mystery. A large iron front sight was installed very close to the muzzle and a multi-leaf rear sight was graduated for use at 100, 200, 300 and 400 yards. The 300-yard graduation was provided via a small peephole in the 400-yard leaf. The iron backstrap was cut to allow the attachment of a removable shoulder stock, which was typically numbered to the gun. The guns and stock were batch numbered from 1-20, with the number stamped into the top rear of the brass butt cap and into the lower part of the buttstock’s brass yoke.

This particular US M1855 Pistol Carbine is in FINE condition and retains the very elusive detachable buttstock, which bears the same mating number as the gun, 16. The gun is 100% complete and correct, and remains in very nice condition with clear markings on all of the metal. The gun has been lightly cleaned to bright, and the barrel is mostly smooth, with only some scattered light patches of light pinpricking present, mostly confined to the area around the breech of the pistol carbine and the muzzle. The top of the barrel tang is clearly dated 1855 and the left breech flat is marked with very crisp V / P / (EAGLE HEAD) proof and inspection marks. The die appears to have jumped when the tang was dated, as a shadow of the numbers appears underneath, suggesting a sloppy strike. The lock has the same lightly cleaned bright steel color as the barrel, and shows slightly more pinpricking than the barrel does. The lock has the matching dated 1855 in a single horizontal line behind the hammer, and forward of the tape primer door it is marked in two horizontal lines: U. S. / SPRINGFIELD. The tape primer door is marked with the usual spread-winged Springfield Eagle, with 5 arrows in one talon and olive branches in the other. The tape primer lock mechanism is 100% complete and remains fully functional. The lock of the pistol carbine remains mechanically excellent and functions crisply on all positions. The original multi-leaf rear sight is in place on the barrel tang and operates smoothly. The original swivel ring is in place on the butt cap of the pistol and the original captive ramrod is in place under the barrel. The bore of the pistol carbine is in FINE condition and very bright, with fine, crisp rifling and only some lightly scattered pitting here and there along its length. The brass furniture has a lightly cleaned golden patina, no doubt resembling its appearance when the gun left the arsenal. The brass butt cap is marked with the mating number 16, indicating that it was intended to mate with butt stock number 16. The walnut stock is in VERY GOOD+ to NEAR FINE condition. The stock is full-length and without any breaks or repairs. This is unusual for these carbines, as they are often found with broken or damaged stocks, particularly through the grip area where the stress of the detachable buttstock tends to cause cracking. In this case, the grip does show two deep, curved indentations from the yoke of the buttstock, marks that are typically encountered on pistol carbines that have spent most of their lives with the buttstock attached, but no cracking. There is a minor, very tight grain crack that runs from the rear most lock mounting screw into the barrel channel and also continues for about 1” behind the screw on the surface of the stock flat. This is fairly common, and is the result of the rear lock screw being over-tightened. There is no visible cartouche on the stock flat, probably due to wear from use. The stock shows no sanding, and retains strong edges and good lines throughout, with any rounding or softening of edges due to carry and use. As would be expected, the stock of the carbine shows the usual assortment of scattered bumps, dings and minor mars from use and handling, but all of this is honest wear. The wood to metal fit of the carbine is excellent throughout.

As noted, the pistol carbine retains an original buttstock that bears the matching mating number 16 and which fits the carbine well. The buttstock retains all of its original attachment mechanism as well as the original sling swivel in the toe line. Like the carbine, the brass furniture of the buttstock has been lightly cleaned, giving it a golden patina. The buttstock appears to have been cleaned at some point in time, and shows signs that it might have been had some finish added at some point in the past. Like the carbine the buttstock does not appear to have been sanded, but the edges are slightly softened, probably from carry and use. The buttstock shows numerous scattered bumps, dings and minor mars from handling and use, as would be expected. The wood to metal fit of the buttstock and its furniture is excellent and the stock fits the carbine perfectly with the attachment mechanism working exactly as it should.

Overall this is a really great example of the US M1855 Pistol Carbine complete with at original, matching buttstock. It is head and shoulders better than many of the examples encountered on the market today, most of which have no buttstock at all, or a reproduction one if one is present. This example really has no issues and is a nice, complete and correct example, which displays very well. These unique guns fit into both the Civil War martial handgun and carbine categories in terms of collecting. They are also only the second handgun to be produced in any significant quantity at the Springfield Armory, with the earlier pistol being the M1817 flintlock pistol. The US M1855 Pistol Carbine was made in rather limited quantities, making them relatively scarce on the collector market. This is a very nice example and it is priced in a very fair manner, making it accessible to most collectors who have waited for a fine condition example, complete with buttstock, to add to their collection.