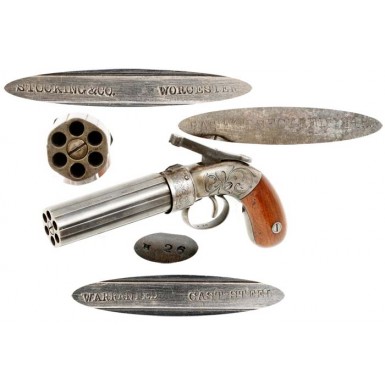 The pepperbox revolving pistol is a classic American firearm that dominated the personal protection market for some two decades between the mid-1830s and the mid-1850s. While the concept of a multiple shot firearm with several barrels clustered around a central axis predated American made pepperboxes by some two centuries, it is the American made examples from 19th century New England that tend capture the imagination of collectors today. The success of the simple system of rotating barrels, firing a new round each time the trigger was pulled is attested to by the quantity of pepperbox type pistols that appear in period images as diverse as the California Gold fields in 1849 and young men heading off to fight in the American Civil War in 1861. The typical American pepperbox was intended to be a pocket-sized protection pistol usually in a small to medium caliber between about .28 and .36, although smaller and larger caliber guns were produced. Barrel clusters tended to be between 3” and 5” in length, although shorter and longer barrels were manufactured and ungainly “Dragoon” pepperboxes were produced on a somewhat limited basis with limited popularity. The first American company to receive a patent related to a pepperbox revolver was the B. & B.M. Darling company of Bellingham, MA, and later Woonsocket, RI. In April of 1836 they received a patent for a single action box lock four-barreled pepperbox revolver. The gun met with limited success and only about 200 were manufactured before the company went out of business in 1839. However, the market had been exposed the concept and over the next few years a multitude of makers in the north eastern United States would produce and retail pepperbox revolvers. The most successful of which was Ethan Allen, who obtained a patent in 1837 for his double action, bar hammer pepperbox design, which would become the prototype for nearly all American pepperboxes produced over the next two decades. In fact, Allen’s pepperbox was the first double action repeating firearm to be patented in the United States. The Grafton, MA based company would move to Norwich, CT in 1842 and eventually to Worcester, MA in 1847, where it would remain. The firm would operate under several names as well, but most of its business would be done under one form or another of the Allen & Thurber name, and would eventually become Allen & Wheelock. Worcester would become a major player in the American arms production industry during the mid-19th century. In addition to Ethan Allen’s company the firm of Allen, Brown & Luther (a partnership between between Fredrick Allen, Andrew Brown and John Luther, 1848-1858) was based in Worcester. It was at this company that such future firearms luminaries as Horace Smith and D.B. Wesson were employed circa 1850-1851. Allen, Brown & Luther also employed Alexander Stocking during its early days. Stocking secured a patent for his own pepperbox design in 1848 and by the following year had established his own gunmaking firm in Worcester, Stocking & Company. The pepperboxes produced by Stocking & Company were an interesting hybrid of the earlier Darling single action mechanism and Allen’s bar hammer design. The guns were single action, bar hammer pistols with 6-shot ribbed barrel clusters that were typically between 4” and 6” in length. The guns were available in .28, .31 and .36 caliber variants, and were produced with and without a nipple shield around the breech. Most were manufactured with nipples that were integral with the barrels, but removable nipples versions were made on a limited basis. Some versions were also produced with a finger spur on the triggerguard. Standard finish was blued barrels and frames with a case hardened hammer and two-piece walnut bag shaped grips. The guns were batch or assembly numbered, and no records survive to indicate the total number of arms produced. According to Frank Seller’s American Gunsmiths the firm was only in business between 1849 and 1852, and it is generally believed that only a few hundred Stocking & Company pepperboxes were produced. Today, the Stocking & Company pepperboxes are quite rare and are prized additions to collections of American made pepperbox pistols.

The Stocking & Company Pepperbox offered here is a NEAR FINE condition example of these scarce handguns. The pistol is clearly marked with two one-line stamps on one barrel rib: STOCKING & CO. followed by WORCESTER. The adjacent rib is marked with two one-line stamps as well, reading: WARRANTED and CAST-STEEL. The left side of the bar hammer is stamped: PATENT SECURED 1848. The pistol is quite crisp and sharp throughout. The nipple shield is crisply engraved with tight floral scrolls and frame is nicely engraves with more open foliate splays. The pepperbox is assembly or batch numbered with the alphanumeric mark H 26. This mark is found on the upper rear of barrel cluster between two chambers, on the inside of the triggerguard bow, on the left side of the frame under the grip, on the hammer and trigger (inside the frame) and on the mainspring. I did not further disassemble the gun in search of assembly marks, but it is clear that the gun remains complete, correct and original with no replaced parts. The interior of removable side plate and the two grip panels are all stamped 198, the meaning of which when compared with “H 26” I cannot fathom. The side plate and grips are clearly original to the pistol and fit perfectly, so they may represent the real serial number of the gun, with alphanumeric mark being an assembly number. The gun has a 4” barrel cluster with six .28 caliber barrels with flat ribs between each barrel. The gun has the nipple shield that is found on some Stocking pepperboxes, and has integral nipples in the barrels. The overall length of the pepperbox is about 7 “. The gun retains about 10%-20% original blue overall, with barrel cluster retaining most that finish, probably around 20%. The blue on the barrels had faded, flaked and worn, but is still visible in scattered streaks, mixed with a smooth plum-brown patina. The barrels are free of any pitting along most their length, but do show some moderate pinpricking around the nipples and some similar pinpricking around the face of the muzzle. The frame retains less blue than the barrels, somewhere between traces and about 10%. The finish remains primarily in the recesses and protected areas, with the balance of the frame having a smooth smoky gray color with bluish tones and some brownish oxidation. As previously mentioned the frame and nipples shield retain very crisp and sharp factory engraving of foliate designs, and the backstrap has some simple boarder line patterns engraved along its edges. The extended bar hammer and cocking lever retains about 40%+ of its original case hardened finish, with mottled hues of blue, purple and brown present, although faded and dulled, and mixed with a smoky gray patina. The action of the pepperbox remains in EXCELLENT condition and the gun times, indexes and locks up perfectly and the bar hammer remains cocked as it should until the trigger releases it. The two-piece bag shaped walnut grips are in about FINE condition and are numbered to the side plate of the revolver. The grips appear to retain much of their original oiled finish and remain quite crisp. They are solid and free of any breaks, cracks, chips or repairs. They do show some minor scattered scuffs, surface mars and few minor dings, but nothing that significantly detracts from the gun in any way.

Overall this is a really crisp, well-marked example of a scarce Stocking & Company Pepperbox that is 100% complete and correct in every way. The gun remains in very nice condition with some original finish remaining and no repairs or improvements to detract from its display. For any serious collector of American pepperboxes and early American made repeating pistols, this is a great example of a relatively scarce pepperbox in very nice condition that you will certainly be glad to add to your collection and display.