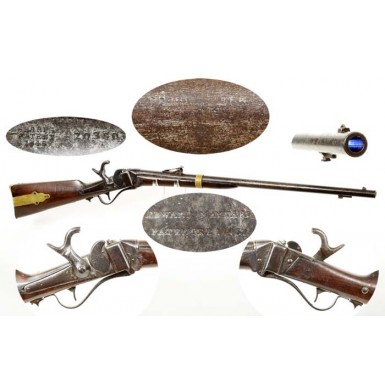 The Sharps family of breech loading carbines is probably the most famous and recognizable breech-loading percussion arms to be developed during the American Civil War era. The “Sharps’ was the invention of Christian Sharps who was born in New Jersey sometime in 1811. In 1830 Christian went to work at the famous US Armory at Harpers Ferry, under the direction of firearms inventor and interchangeable parts pioneer John Hall. Sharps worked at Harpers Ferry for over a decade, learning the arms making trade, as well as the early concepts of assembly line production. In 1848 Sharps received his first patent for a breech-loading carbine. A.S. Nippes of Mill Creek, PA produced the first Sharps patent firearms in 1849 and 1850. By 1851, Sharps formed the Sharps Rifle Manufacturing Company in Hartford, CT. As the company was not yet ready to produce arms, Sharps entered into an agreement with Robbins & Lawrence of Windsor, VT to manufacture arms for him. By 1852 RS Lawrence (formerly of Robbins & Lawrence) moved to Hartford and became the master armorer of the new Sharps Rifle Manufacturing Company. The transition to the production of guns at the Sharps Rifle Manufacturing Company was rather slow, and many of the Model 1853 carbines were produced by Robbins & Lawrence. The Sharps Rifle Manufacturing Company finally took over production in Hartford in October of 1856. Like most of the Sharps produced arms, the guns were serial numbered consecutively, with all models in production at that time within the same serial number series. Each model did not begin with serial number “1”, but instead received a number representing its place in the production of all Sharps firearms. This means that other models do appear within the same serial number range. The M-1853 “slant breech” carbine experienced moderate success in use with the US military, and the upgraded Model 1855 had the potential to do the same. The Model 1855 was for all practical purposes a Model 1853 that incorporated Dr. Edward Maynard’s automatic tape priming system into the lock. The first major buyer for the new Sharps product was the British government. They awarded Sharps two contracts for a total of 6,000 Model 1855 carbines, in two variations; 3,000 with 21” barrels (standard length) and 3,000 with 18” barrels. The US Army purchased an additional 600 of the 21” barreled carbines, and the US Navy purchased 101 of the carbines. The remaining 95 Model 1855 carbines that were produced were for private sale on the civilian market. On March 14, 1856, US Naval Commander John A. Dahlgren (who was in charge of the Navy’s Bureau of Ordnance and Hydrography at the time) placed an order for 150 rifle-length Model 1855 Sharps. The guns were to retain the carbine forend and the Maynard tape primer lock. However, they were to have 27” barrels, with a lug for a saber bayonet mounted under the barrel, near the muzzle. The mount included a short guide key or lead forward of the main lug. The rifles were also equipped with Enfield Pattern 1853 rifle musket adjustable rear sights, likely left-over from the Robbins & Lawrence contract to produce Enfield Rifle Muskets for the British government. The rifles were to cost $36 each, including the brass handled saber bayonet, and deliveries were start by early-to-mid-April. Sharps was unable to meet the delivery schedule and the rifles did not start to arrive until September of 1856. Eventually the order was increased to 200 of the rifles with 201 being delivered, including a sample. Of the these guns, fifty included the Rollin White patented “automatic cocking system”. The rejection rate of the delivered guns was quite high, with 57 of the 200 rifles being rejected and returned for repair. Of these, 38 had the Rollin White system. This system was found to work poorly and to weaken the wrist, and in the end the 38 arms with that system that were returned to Sharps had it removed, leaving only 12 of the “automatic cocking” guns to be produced and see service. Overall, just shy of 13% of the regular Sharps 1855 Rifles were initially rejected and a whopping 76% of the Rolling White equipped arms were rejected. Eventually, all the guns were repaired and accepted, but it seems to have left a bad taste in the Navy’s mouth, as only 100 additional Model 1855s were acquired, and these were 21” barreled carbines that were overruns from the British contract and were sold at the reduced price of $25 each. The Sharps M-1855 “Naval” Rifle would eventually be issued for use aboard the frigates USS Mississippi, USS Wabash, USS Minnesota, and most famously aboard the USS Merrimack, with each receiving thirty-five of the rifles. The Merrimack would be captured by the Confederacy in April of 1861 while it was in dry dock, and would be converted to become the first Confederate iron-clad CSS Virginia. The Virginia would subsequently fight the Union Monitor off Hampton Roads on March 9, 1862. Fourteen of the Sharps M-1855 Rifles were also issued for use on Dahlgren’s ordnance trials ship the USS Plymouth, where they were issued to the ship’s 2nd Division. During small arms practice, the 2nd Division scored 77% accuracy with the Sharps, while the 1st and 3rd Divisions, armed with the Dahlgren designed “Plymouth Rifle” scored 40% and 44% accuracy, respectively. The Marine guard, armed with conventional smoothbore muskets, scored 50%, proving that a trained rifleman with a smoothbore musket was more accurate than a sailor with a rifle; a fact that was no doubt the source for much good-natured ribbing by the Marines.

This Sharps Model 1855 Naval Rifle is in about GOOD+ to NEAR VERY GOOD condition. The gun shows the use and wear typical of most pre-Civil War US Navy issued small arms. The gun is clearly marked on the Maynard tape priming door, forward of the hammer: EDWARD MAYNARD / PATENTEE 1845, and is numbered 785 on the door’s interior. This is a patent tracking number for the payment of royalties to Maynard and is not related to the serial number of the rifle in any way. The tang of the rifle is marked SHARPS / PATENT / 1848 in three lines, followed by the serial number 20350. The matching serial number is present under the barrel, and is concealed by the forend. The same number is also stamped into the barrel channel of the forend. The top of the barrel is marked in three lines: SHARPS RIFLE / MANUFG. CO. / HARTFORD CONN.. No indications of government or military inspection are present, which is not uncommon on these pre-war navy purchased Sharps Rifles. In some cases, when Navy inspection or ownership marks are present, they are from later, Civil War era inspections. The bottom of the buttplate is rack numbered and appears to read 23 but is stamped in such a way that more than half of both numbers were never struck into the brass due to the concave recess of the butt. The action of the rifle functions perfectly, and the gun is mechanically excellent. The Maynard patent tape primer system is functional as well, but is missing the small primer tape tensioning arm from the magazine recess. The falling-block loading system functions correctly as well. During the production of the Sharps M-1853 and 1855 series of arms, three different styles of breechblock designs were employed. The earliest (and most desirable to many collectors) had a platinum ring that sealed the breech of the carbine. This rifle has the platinum ring breechblock. The gun retains only the most minimal traces of its original finish, with some minute traces of original finish present in the protected nooks and crannies. The barrel, receiver, lock and lever all have a thick, dark, untouched plum-brown patina that is heavily oxidized and quite even throughout. The patina suggests the original browned finish of the rifle. Overall the metal is partly smooth, with scattered areas of light pitting, that is more moderate in some areas, as well as patches of oxidized surface roughness. There are also areas of scattered pinpricking and peppering present, with the area around the breech and at the muzzle showing the most pitting and roughness. The bore of the carbine is in about VERY GOOD condition. It is mostly bright and retains crisp rifling, with some lightly scattered pitting along the length of the bore, and some more moderate wear and pitting in the last few inches, closest to the breech. The gun retains its original and correct, Enfield pattern rear sight, as well as the original front sight and the original keyed bayonet lug under the barrel. The key is located 2.5” from the muzzle and the main lug is 3.5” from the muzzle. The brass furniture has a lovely, untouched, mustard patina, which is very attractive. The stock and forend of the carbine rate about GOOD and are the primary reason the rifle does not rate “Very Good” overall. Both pieces of wood show heavy use, some damage and some repairs. While both pieces of wood show the expected array of scattered bumps, dings and mars that are accumulated in military service, they also show more significant wear. The toe of the stock shows a well-executed repair that appears quite old, but is a 4.5” replaced piece of wood. The toe line of Sharps rifles and carbines is notoriously weak and repairs in this area are quite common. There is also a repaired crack on the left side of the tang, behind the receiver and a small chip of wood is missing behind the tail of the lock plate. Several small surface grain cracks are evident in the buttstock as well. The forend shows equally hard use and wear, with the most significant issue being a 4.5” repaired diagonal crack that runs through the screw near the receiver that holds the forend in place. Like the buttstock, the forend show numerous bumps and dings, a few minor surface grain cracks and a couple of chips here and there.

Despite the wear to the wood, the rifle remains a good, solid example of an extremely scarce US Navy breechloader that pre-dates the American Civil War. With only 251 of these rare Sharps M-1855 Navy Rifles being produced, these guns rarely appear on the market for sale, and only occasionally at a price that is below five-figures. This is a gun that is missing from nearly all US military long arms collections and that is rarely found in even the most advanced Sharps collections or US Navy collections. For any serious US Naval collector, particularly one who has an interest in the smalls arms trials of John Dahlgren, this is a “must have” gun, as Dahlgren not only ordered these rifles, but also teste them against his Plymouth Rifle and found the Sharps much more accurate. Despite the honest wear to the rifle, the gun remains very attractive with the metal particularly appealing from an aesthetic standpoint. I am quite sure you will be very pleased to acquire this very scarce Sharps Navy Rifle for your collection and will be equally pleased that it is not priced anywhere near the 5-figure price that these guns often bring.