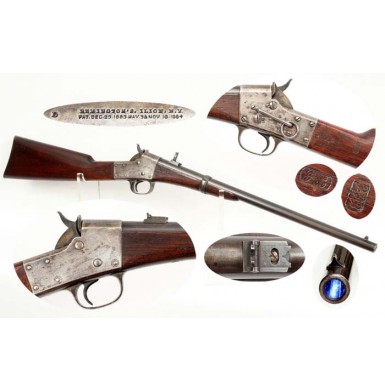 The Remington Type 1 “Split Breech” Carbine holds a number of distinctions in the history of American firearms. The carbine is considered to be the first metallic cartridge long arm to be produced by the famous Remington Arms Company, even though they outsourced the production! The “Split Breech” was also the last pattern of military carbine to be delivered to the US government during the American Civil War. The Remington “Split Breech” was also the direct predecessor of what would become the most widely used single-shot, breechloading, military rifle action of the 19th century; the rolling block. The development of the split breech action is attributed to Remington’s Joseph Rider, who was responsible for the myriad of Remington-Rider firearms designs. However, it appears that in reality the Rider design, patented in December of 1863 was quite similar to the design of Leonard Geiger, which had been patented in January of 1863. In order to make sure that no patent infringement suits were ever brought against the company, Remington acquired Geiger’s patent rights in the fall of 1865. With both the Rider and Geiger patent rights in hand; the company had a lock on the “rolling block” action design. The US Ordnance Department was sufficiently interested in the design to contract with Remington for 1,000 of these small frame, “split breech” carbines, to be chambered in .44 rimfire. Unfortunately, all of Remington’s production capacity was tied up in the manufacture of their .44 “New Model” Army percussion revolvers and US contract rifles (the M-1863 “Zouave”) and rifle muskets (US M-1861 / 63 models). As a result, Remington approached Samuel Norris (formerly of Norris & Clements) who was involved with the Savage Revolving Arms Company. Norris agreed to manufacture the carbines, but required a minimum order of 10,000 to make it worth tooling up for the production of the guns. Remington took the risk and placed the order. It was a gamble that worked out, as the order was eventually increased to 5,000 of the small frame, split breech carbines (Type 1), and an additional order was placed by the Ordnance Department for 15,000 large frame, split breech carbines (Type 2) in the newly adopted US government .50 metallic cartridge (what would become known to collectors as the 56-50 Spencer). At some point during the production process the caliber specification for the small frame carbines was changed from .44RF to .46RF, the same caliber as the majority of the Ballard military carbines and rifles. Deliveries of the .46RF Remington Type 1 Split Breech carbines began at the beginning of 1865, with the majority having been delivered before the end of the Civil War. All of the guns were delivered within weeks of the close of the conflict. However, the carbines do not appear to have been issued for the war. The majority of the guns spent the next 5 years in storage in US arsenals, with about 1,400 being issued to various state militias and seeing some post-Civil War use. In 1870, with the coming of the Franco-Prussian War, Remington managed to buy back roughly 3,600 of the 5,000 Type 1 carbines, and sell them to France for use in that conflict. The balance of the carbines were sold as surplus over the ensuing years, for significantly less than the $17.00 per carbine that the Ordnance Department initially paid for them.

The Remington .46RF Type 1 Split Breech Carbine was a compact and rugged, single-shot breech loading carbine. The gun has a case hardened frame, a 20” round blued barrel and a two-piece stock with a carbine style butt and short, tapered forend. The size, weight and appearance of the carbine was similar to that of the 2nd Model Maynard carbine. A sling bar and ring was attached to the reverse of the frame, and a simple, two-leaf aperture rear sight (much like the Whitney “mid-range” sight) was mounted on the top of the frame. The barrel was secured to the forend with a single mounting screw from the bottom and a single blued barrel band. The tang of the frame was marked in two lines: REMIGNTON’s. ILION, N.Y. / PAT. DEC. 23, 1863. MAY 3 & NOV 16, 1864.. The markings reference both Rider’s and Geiger’s patents. The guns were an important step for the Remington design team, as they formed the groundwork for the rolling block action. That design would become the most successful single-shot, metallic cartridge military long arm of the mid to late 19th century, and would used by more countries than any other competing design.

The Remington Type 1 Split Breech .46RF Carbine offered here is in about VERY FINE overall condition. The gun is very crisp and sharp throughout, and is 100% complete, correct and original. The 20” round barrel retains about 70%+ of its original blued finish, which is thinning and fading from age, use and handling. The case hardened frame retains about 10%+ original case coloring, with some nice mottled traces of blue, purple and brown hues noted. The majority of the frame has a smooth pewter gray patina, with some scattered areas of minor age discoloration. The barrel and frame are both almost entirely smooth with no pitting noted. They both show some very tiny patches of lightly scattered pinpricking and some very minor surface oxidation. This is most noticeable on the rear sight, and could probably be easily cleaned off if so desired. The bore of the carbine rates about VERY FINE. It is bright and crisp with excellent rifling, and shows only some lightly scattered pinpricking and very minor scattered pitting. The tang of the carbine is clearly marked: REMIGNTON’s. ILION, N.Y. / PAT. DEC. 23, 1863. MAY 3 & NOV 16, 1864.. The tang is additionally marked with a D sub-inspectors’ mark, and the same inspection mark is present on the top of the receiver, as well as the top of the buttplate. Another sub-inspectors’ mark, a J is present on the top of the barrel, between the rear sight and the breech. The gun is in EXCELLENT mechanical condition and the action functions both smoothly and crisply. The stock and forend of the carbine rate about VERY FINE+ and are both very attractive. Both pieces of wood retain the majority of their original finish and show no signs of sanding. The wood shows only some lightly scattered bumps and dings from service and handling, all of which are minor. The reverse wrist of the carbine is clearly marked with a small P sub-inspection mark and with two excellent cartouches. The first cartouche is a crisp script set of initials that appears to read PB (sometimes those script letters are hard to read!) and the second is an equally sharp CGC (armory sub-inspector C. G. Curtis). The wood is free of any breaks or repairs and remains solid throughout.

Overall this is a really attractive and very crisp example of a rather scarce and historically important Remington Type 1 Split Breech Carbine. The majority of these arms were exported to France in 1870, and those that have made their way back to the US over the years are typically in well-used and rough condition. This carbine is likely one of the only 1,400 that remained in the United States, probably seeing post-Civil War service with a northeastern state militia and eventually being sold as surplus. This gun is an important “book end” for any collection of Civil War carbines, as it is the last Civil War carbine pattern to be accepted and delivered to the US Ordnance Department. It is also an important gun for any rolling block collection, as it is the first type of military rolling block to be manufactured and see service and is really the grandfather of all subsequent rolling block designs. This is a wonderful example of a very scarce US military carbine that displays wonderfully, and will be a great addition to your antique military arms collection.