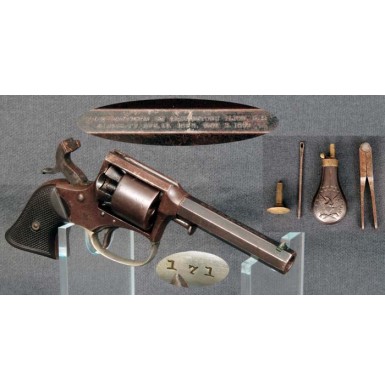 This is a very nice example of the Remington Rider Pocket Revolver, complete with its original pasteboard box and its associated accessories. The Remington Rider Pocket Revolver was an improvement over its predecessor the Remington-Beals Pocket Revolver, with a somewhat more robust, simplified and smoother action. The Remington Rider pocket revolver was produced from 1860 to 1873, with a total production of about 2,000. Initially it was produced as a percussion ignition .31-caliber pistol, but the later production guns often left the factory as cartridge pistols, chambered for .32 rimfire. The percussion models had 3” octagonal barrels, while some of the later cartridge pistols had shorter barrels with a length of 2” or 2 “. Both pistols had five shot cylinders. The pistols were produced with blued barrels and cylinders, with either silver plated, or nickel-plated frames. The nickel frames are most often encountered on later production cartridge pistols. Some variation in finish has been noted, and some may have been produced with entirely blued finish. The hammers were color case hardened, the triggerguard was made of German silver, and the grips were checkered hard rubber (often misidentified as Gutta Percha). The earliest pistols had German silver cone shaped front sights dovetailed into the barrel, similar to the cone sights found on many of Remington’s early production large frame revolvers. However, the majority of the pistols were produced with a simple pin front sight. The double action lockwork of the revolver made the gun somewhat unique during its period of production, and the Remington Rider pocket revolver was one of the first widely produced American pistols to use that mechanism successfully.

This Remington Rider Pocket Revolver is in VERY GOOD+ condition. The pistol clearly shows years of use, yet it remains crisp and sharp condition. The gun is 100% complete, correct and original in every way. It is one of the very early production pistols, with the serial number 171 marked under the barrel, inside the triggerguard, under the frame (near the trigger) and in side both of the hard rubber grips. The pistol also has the very early production German silver cone front sight dovetailed into the end of the barrel, near the muzzle. The top flat of the 3” octagon barrel is clearly marked in two lines: MANUFACTURED BY REMINGTONS”, ILION, N.Y. / RIDERS PT AUG. 17, 1858 MAY 3, 1859. The gun retains about 30%-40% of its original bright blued finish on the barrel, which has blended with a lovely, smooth plum-brown patina. The frame has the same smooth plum-brown patina, with traces of blue present in protected areas and the nooks & crannies of the frame. This is one of the pistols that does not appear to have had a silver-plated frame. The cylinder has a mostly smooth, plum brown patina and retains no discernable original finish. The rear of the cylinder shows light to moderate flash pitting from the percussion caps, and the chambers show some light pitting and oxidation. The exterior of the cylinder is mostly smooth, with some scattered areas of light peppering and pinpricking. The hammer retains about 10%-20% of its original case colored finish, which has faded and blended with a smoky gray patina. The action of the pistol is mechanically excellent, and the pistol functions perfectly. The gun times and locks up exactly as it should, with the hammer and trigger functioning crisply in both single action and double action modes. The bore of the pistol rates about GOOD+ and retains strong, deep rifling that is quite crisp. The bore is dirty and has scattered patches of light to moderate pitting and some active oxidation along its entire length. The bore would probably been improved with a vigorous scrubbing with a bronze brush. The two-piece, hard rubber grips are in FINE condition. They retain crisp checkering and are free of any breaks, cracks or chips. They show only some minor light handling marks and minor smoothing to the checkering due to use. The fit of the grips to the frame is excellent, and they are numbered to the gun on their inner surfaces.

The pistol is accompanied by its original pasteboard storage box, loading/cleaning tool, bullet mold and powder flask. The box is in about FAIR to GOOD condition and shows significant wear. Realistically the box is in pretty good shape for being 150 years old! The box shows significant dirt and water staining both inside and out, and much of the outer surface is loosing its black paper covering. The interior of the box retains the original cardboard divider for the power flask compartment, and a loose piece of cardboard that appears to have completed the divided section for the mold and tools. Remington collectors refer to this pattern of box as the “3-compartment” type. The original copper powder flask is included with the pistol. The diminutive flask is embossed with a spread-winged American Eagle, clutching arrows and olive branches in its talons. The eagle surmounts a pair of crossed pistols and has 13 stars surrounding the eagle. The flask is completely unmarked, and is referred to by collectors as the “unmarked” Remington flask (Riling #757). The flask is in about VERY FINE condition, and is free of any dents, dings, cracks or repairs. The copper surface retains about 80%+ of its lacquered finish. The only condition issue for the flask is the operating spring that keeps the flask closed is broken. This would be a fairly easy item to fix with a replacement spring. The original, unmarked iron bullet mold is also present with the pistol. It is the standard, dual cavity mold to cast .31 caliber round balls. The interior is crisp and sharp, with bright surfaces and fine cavities. The exterior is mostly smooth, with some light patches of minor surface oxidation, and a mottled brownish patina. The pistol also retains the original combination loading tool and cleaning rod. This two-piece assembly includes a 3 7/8” threaded rod with a cleaning jag hole for a patch. This rod screws into the 1 ““ brass loading tool for use in cleaning the bore of the pistol. The brass loading tool was designed to help seat the .31 caliber round lead balls in the cylinder chambers, after the powder had been loaded. The brass loader has a medium bronze patina, and shows numerous light bumps and dings from use.

Overall this is a really nice example of a Remington Rider Pocket Revolver that has clearly seen use, but was never abused and was apparently well cared fore. The pistol is 100% complete, correct and original and retains its original accessories and the rather scarce original pasteboard box. The gun is one of the earliest of these pistols made, and was no doubt manufactured in 1860 “ the first year of production. The gun also has the very desirable early German silver cone front sight. This would be a great little gun to display in any collection of 19th century pocket revolvers, and would also look great in a display of Civil War soldier personal items, as there is no doubt that at least a few of these went to war in the pocket of both Northern and Southern soldiers who wanted a little extra advantage in the case that the fighting got up close and personal. This little revolver looks very nice and the original box and accessories are a great addition to the display of the pistol.