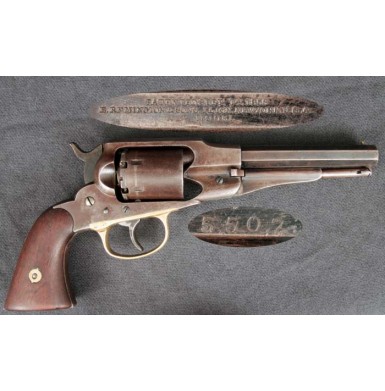 This is a very nice example of a factory alteration to metallic cartridge of the Remington-Rider Double Action New Model Belt Revolver. These guns used a distinctive double-action lock work, which is readily identifiable by the trigger, which rides in the center of the triggerguard, instead of towards the rear of the triggerguard, as with single action revolvers. It is estimated that between 3,000 and 5,000 of these revolvers were produced between 1863 and 1873. The guns were initially introduced as six shot .36 percussion revolvers, but an alteration to metallic cartridge was made available by the late 1860’s. The alteration was to the .38 Rim Fire cartridge, and was accomplished via an interesting two-piece cylinder with a rear breech plate. It is believed that the last of the guns produced were manufactured as metallic cartridge revolvers and were never offered in percussion. The 2-piece conversion cylinder includes a removable rear cylinder plate, which is indexed to the rear of the cylinder via a pin. The rear of the plate engages the hand mechanism of the revolver for rotation. The cylinder and rear plate must be removed in order to load or unload the revolver. This conversion system allowed a percussion cylinder to be placed in the gun as well, making it a more versatile revolver than the guns that used a fixed conversion plate at the rear of the frame.

The Remington-Rider Double Action Belt Revolver offered here is in about FINE overall condition. The gun was almost certainly manufactured as a .38RF metallic cartridge gun, as it is a very late production gun, based upon its serial number. The gun is clearly marked in three lines on the top of the 5 1/2” octagon barrel: PATENTED SEPT. 14, 1858 / E. REMINGTON & SONS, ILION, NEW YORK, U.S.A. / NEW MODEL. The serial number 5507 is marked on the bottom of the barrel (hidden by the loading lever) and on the left grip frame, under the grips. The conversion serial number 1000 is marked on the rear of the cylinder as well as the rear of the conversion ring. The shorter than normal 5 ““ barrel and the brass post front sight are not uncommon features found on the later production cartridge versions of this revolver. The gun retains about 40%+ of its original blued finish on the barrel and loading lever and around 10%+ on the frame. The cylinder retains only traces of the original finish in protected areas. The balance of the gun has a gorgeous smooth brown patina, which has blended well with the remaining blue finish. The gun has a VERY GOOD bore with crisp rifling and only some scattered light pitting along its length. The gun functions well mechanically, in both single action and double action modes. The gun times and indexes well and functions as it should. The brass triggerguard has a mellow yellow color to it. The percussion loading-lever is in place under the barrel, holding the cylinder pin in place. However, since this gun was produced strictly as a cartridge gun, there is no loading plunger on the end of the lever. The screw that holds the loading lever in place in the frame appears to be a replacement. This one tiny piece is the only part of the gun that is not 100% correct and original. The two-piece walnut grips are in about FINE condition. They show the usual bumps and dings from handling and use, but show no abuse. They are free of any breaks, cracks or repairs, and other than the tiniest chipping to the sharp leading edges of the grips show no real damage.

Overall this is really fine condition and very lovely condition example of a relatively scarce Remington revolver from the late Civil War and early western expansion era. This was likely one of the very last of these guns produced (serial number 5507 out of a theoretical production of 5,000), and is a great example of one of the early cartridge revolvers that saw use as American headed west. The gun retains lots of original finish and has a very nice, untouched look that is very attractive. The gun is 100% complete and correct in every way, with the exception of a single small screw in the frame. Double action revolvers were not common in the old west until the Colt M-1877 Lightning and Thunderer revolvers were introduced. This is a neat example of an early old west double action revolver in an early cartridge chambering, that will be a great addition to your Old West or Remington revolver collection.