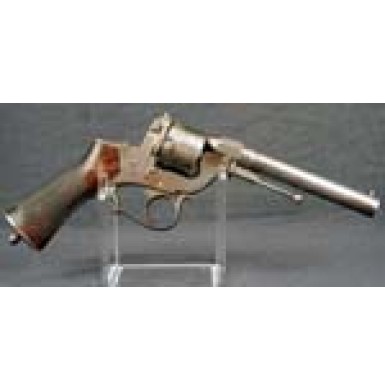 Next to the Raphael revolver, the French Perrin is probably the least often encountered Civil War import handgun. Like the Raphael, it was a 6-shot, double action revolver that fired a very advanced 12mm (approximately .45) self-contained cartridge. Approximately 550 of these revolvers (of a contract for 1,0000) were delivered to the US Government by arms speculator Alexis Godillot at a price of $20.00 each. Godiloot made his delivered 350 Perrin’s on January 6, 1862, another 100 on March 28, 1862 and the last 100 that he could provide on May 31, 1862. On May 31 he also delivered 1,500 Lefaucheux pin fire revolvers, and no further deliveries of Perrin’s are noted. Unlike the Raphael, this gun was strictly a double action design, with a spurless hammer, similar to the early Adams patent revolvers. In fact, the gun featured an Adams style safety spring on the left hand side of the frame. By lightly depressing the trigger and pushing the safety spring towards the frame, a block was inserted that kept the hammer from contacting the cartridges. Pulling the trigger to fire the gun automatically released the safety. The Perrin, had an interesting hidden rod used to eject spent cased from the cylinder. The center portion of the cylinder pin could be pulled out, and then rotated on a cam on the barrel to be placed into the correct position on the right hand side of the gun to be used to push the empty cases out of the chambers. The gun was marked with Perrin’s name and a serial number on the major components.

This Perrin is in very fine condition, with smooth bright metal throughout with scattered areas of peppering and some minor pin-pricking. The double action system works well and is crisp, even if the trigger pull is very heavy. The odd, thin loading gate is present and functions properly. The ejector rod in the center of the cylinder pin works as it should, pulling out and rotating to the right side of the gun so it can be used to remove the spent cartridge cases. The one-piece walnut grips are in very good condition, with no chips or cracks, and fine checkering throughout. The original, small diameter lanyard ring is present on the iron butt cap and swivels freely as it should. The cylinder is marked L. PERRIN on one “side” and No 154 on the opposing “side” (I know, cylinders do not have "sides”.). The same name and serial number also appear on the bottom of the barrel (hidden by the ejector rod/cylinder pin) and on the side of the frame, forward of the cylinder. The Adams style spring safety is present on the left hand side of the frame and works well. The only detraction at all is that no rifling remains in the bore.

Overall this is an excellent example of one of the two rarest import revolvers used during the Civil War. While not commanding the price or the renown of the LeMatt, far fewer of these revolvers exist these days. Like the Raphael, Fredrick Todd’s seminal work “American Military Equipage 1851-1872” lists these revolvers as being purchased by the Confederacy as well as by the US government. It is rare to see one of these revolvers on the market, let alone in a collection. Many of the finest collections of Civil War revolvers simply do not have a Perrin in it. Here is a great chance to own an excellent example of this rare gun.