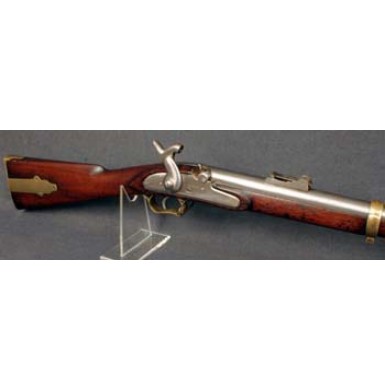 I have always felt that the arms produced by P.S. Justice of Philadelphia were very intriguing. Justice was definitely a shrewd businessman, who saw an opportunity to make money and managed to secure a number of US arms contracts in the early days of the Civil War. Whether he was a patriot trying to assist his country with essentials arms and materiel or simply an opportunist is open to debate. What is obvious is that Justice took a cue from Eli Whitney Jr.’s company and minimized costs as much as possible in order to maximize profit. This meant that Justice’s firearms ended up with a reputation for being of poor quality and unsafe. There was at least some basis in fact for the reputation, as Justice was brought before the 37th Congress to answer for his war profiteering and for providing shoddy and substandard guns. One officer, 2nd Lt, William H. Harris who testified about the quality of the Justice rifled muskets issued to the 55th PA infantry noted that:

This regiment is armed with rifle muskets, marked on the barrel, 'P. S. Justice, Philadelphia, and vary in caliber (sic) from .65 to .70. I find many of them unserviceable and irreparable, from the fact that the principal parts are defective. Many of them are made up of parts of muskets to which the stamp of condemnation has been affixed by an inspecting officer. None of the stocks have ever been approved by an officer, nor do they bear the initials of any inspector. They are made up of soft, unseasoned wood, and are defective in construction. . . . The sights are merely soldered on to the barrel, and come off with the gentlest handling. Imitative screw- heads are cut on their bases. The bayonets are made up of soft iron, and, of course, when once bent remain set.

The arms which were manufactured at Philadelphia, Penn., are of the most worthless kind, and have every appearance of having been manufactured from old condemned muskets. Many of them burst; hammers break off; sights fall off when discharged; the barrels are very light, not one-twentieth of an inch thick, and the stocks are made of green wood which have shrunk so as to leave the bands and trimmings loose. The bayonets are of such frail texture that they bend like lead, and many of them break off when going through the bayonet exercise. You could hardly conceive of such a worthless lot of arms, totally unfit for service, and dangerous to those using them.

While it is true that Justice used a variety of obsolete and condemned parts in the construction of his arms (similar to the Whitney “Good & Serviceable” guns), he did also produce some arms of new parts. His greatest short fall appears to have been the use of wood for the stocks that was not sufficiently seasoned, which lead to shrinkage and multiple service issues.

The musket offered here is one of the P S Justice Type III rifled muskets. The gun is one of the better examples of Justice’s work and is in Very Good condition overall, and considering the many issues found with Justice arms today is in about Fine condition for a Justice gun. The top of the barrel is clearly marked in two lines at the breech with P.S. JUSTICE / PHILADA. The lock is marked forward of the hammer with a Eagle / US and in two horizontal lines P.S. JUSTICE / PHILADA. A single lock screw that enters the stock flat through a teardrop shaped brass washer retains the lock. The lock has the appearance of an older style US musket lock and may be a re-worked US M-1835/40 or M-1842 lock. In typical Justice fashion, the barrel tang, the re-curved brass trigger guard and the bottom of the muzzle are all stamped with a serial number, in this case: 429 in all locations. The gun also has a number of file slash and punch dot assembly marks that all indicate an assembly number of 6. Even the ramrod is marked with the file slash VI. The gun’s action works well and is still quite crisp on both positions. The gun retains both of the original, poor quality sling swivels, as well as the Whitney style long-base long-range rear site. The elevator wing is missing from the site. The gun retains the original brass blade front site that is often missing from these muskets, as well as the original bayonet lug. The ramrod is original, full length and retains fine threads at the end. The brass furniture of the musket has all be lightly cleaned, and appears to have had a light protective coating of varnish or shellac added long ago to prevent tarnish. The iron barrel has been cleaned, although all marking remain clear and distinct. Some scattered areas of light peppering and minor pitting are visible on the silvery gray barrel. The .69 bore is in very good condition and would likely clean to fine. The bore is rifled with 6 narrow grooves that remain crisp and sharp. The bore is mostly smooth and bright, with only some light discoloration and minor roughness present near the muzzle.

The stock is in very good condition as well, but for Justice musket rates about fine. Normally the unseasoned stocks show significant shrinkage, and a large number of handling dings and damage. The stock is actually still fairly crisp, with some slight shrinkage making it difficult for the barrel bands (mostly the middle one with the swivel) to be tightened enough to remain in securely in place. The stock is free of breaks or repairs and shows only one tiny grain crack (less than 1/2”) from the lock mounting screw to the barrel channel, the result of the single lock screw being over tightened. While the stock does show the typical array of handling bumps, dings and abrasions, they are not nearly as bad as are typically encountered on a Justice stock. The area from about 2” behind the upper barrel band, to the tip of the fore end, show the most bumps and dings. The overall wood to metal fit is substantially better than most Justice muskets, without the typical gaps and spaces between metal components and the stock in he trigger guard, butt plate and patch box areas. The wood has an attractive reddish hue and looks very nice mated with the brass furniture.

Overall this is one of the better-built and nice examples of these odd rifle muskets that I have seen. It has tons of eye appeal due to the brass furniture and it has a much better than typically encountered stock. No collection of Civil War long arms is complete without at least one really odd-ball US musket and this one would be a great addition to any collection that centers on Pennsylvania troops, rifled large bore arms, or guns produced and sold by some of the less than scrupulous arms brokers of the American Civil War era.