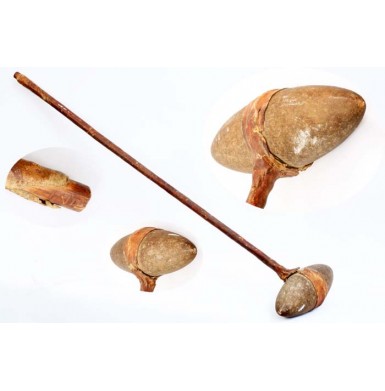 Offered here is a wonderful original example of a Great Plains Double-Headed Stone War Club, typical of the pattern that saw use with plains Indians from the introduction of the horse through the end of the 19th century. The club has the classic double-headed form, with the stone head carefully worked and tapered to a “football” type shape. The head measures approximately 7 ““ in length and is about 2 ““ wide at the widest point. The club weighs in at slightly more than 3 pounds, a very comfortable weight for long term carry but a very effective weight for combat. After doing the rather complicated mathematics to determine the kinetic energy in Joules delivered by a 3 pound club with a 30” haft, falling through a 90-degree arc in about “ of a second, the result is that at least 500 Joules of energy would be communicated to the target, not counting any additional energy applied by the actual force of the blow. This calculation was based simply on the club as a “pendulum” falling through the 30” arc described by its handle in .25 seconds. For the sake of comparison, that is slightly more than the muzzle energy of a 9mm pistol round (about 450 Joules of energy) and not tremendously less than that of a .357 Magnum (about 650 Joules)! The stone head is grooved in the center of its base to accept the wooden handle and it is secured to the handle with multiple layers of wrapped raw hide that were applied wet and sewn into place with sinew and then allowed to dry and shrink. The handle was also covered with rawhide and sewn with sinew along a seam that runs the entire length of the 29 ““ long handle. The club appears to have received minimal decoration, with only a coating of monochrome red ocher paint that was applied to the handle covering and rawhide wrap. The rawhide has worn and split at the very end of the handle, leaving about ““ of wood exposed, and may have had a drop or thong attached at that point originally. The lack of significant decoration suggests that this club was meant for business, not ceremonial or dance use. The 29 ““ handle and 32 ““ overall length certainly suggest it was intended for use on horseback. The general appearance and condition of the club suggest it was probably made during the middle or 3rd quarter of the 19th century, at the height of the Indian Wars on the Great Plains. The overall condition of the club as a 150-year-old Native American artifact made of natural material and meant for war is really VERY GOOD. The stone head shows some minor scuffing and indications of some impact around both of the stone “points”. The rawhide wrap that secures the stone head to the handle is well worn and has mostly separated on one side. It is difficult to determine if this is from use, deterioration due to age or from the work of a hungry rodent that gnawed the rawhide. As a result of the wear and separation, the stone head is no longer securely attached to the shaft and will probably come loose completely if the stone is not supported at all times. As such, the club will be carefully packed to support the head when shipped. The head should always be supported when the club is handled, as the weight of the stone itself may separate the head from the shaft. As mentioned earlier, the wooden handle is 29 ““ long and is about 5/8” in diameter and is encased in rawhide as well (making it about 7/8” in diameter), all of which is sewn with sinew. The very end of the handle wrap (about “) has come loose and is worn, exposing the wood at the end of the handle. No drop or thong is present at the end of the club. The rawhide handle and head wrap were all painted with a natural red ocher paint, which has faded, dulled and worn with age, but is still visible on the rawhide. All of the stitching that secures the handle wrap appears to be original and remains tightly in place. At the bottom of the exposed piece of wooden handle, the initials W C have been crudely carved. It is not clear from what era these initials are, but they are likely not as old as the club itself. The club has a lovely, untouched appearance and is a classic example of a mid-19th century Plains Indian war club. While it is almost impossible to identify the tribe that may have produced this club, a review of similar clubs in institutional collections reveals that most are identified as Lakota (Sioux), specifically Oglala. Whether the Oglala had a particular penchant for this style of club, or if most of the institutional examples were simply collected on the Pine Ridge Reservation (South Dakota) during the turn of the century, is difficult to know.

In a world where original Native American relics and artifacts are difficult to obtain due to forgery and fakery, and when those that are original are often very late 19th century artifacts of the reservation era, original, untouched relics like this are highly prized. While this club has some minor condition issues, it still displays very well and is quite likely a real world “working piece” not a ceremonial or dance club. The simplicity of the decoration not only suggests a real combat item, but also a working life before most of the tribes were resettled permanently on reservation lands. Although impossible to know for sure, this club is much more likely to be circa 1850-1880 than it is to be circa 1880-1900. It is a great example of the continued use of an archaic, but very effective, weapon during the era of modern firearms by a people whose honor required them to get “up close and personal” when fighting. This will be wonderful addition to any serious collection of old west and Native American arms, and at a price much more reasonable that they typical $1,500+ these clubs are brining at auction these days.