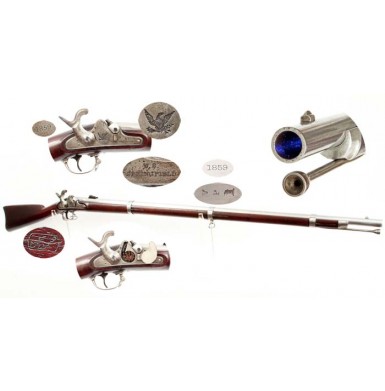 This is a VERY FINE+ to NEAR EXCELLENT condition example of the US M-1855 Rifle Musket, as produced at the famous US arsenal at Springfield, MA. The adoption of the Model 1855 by the US Ordnance Department was significant for a number of reasons. It was the first reduced caliber infantry long arm to be adopted for universal issue, being only .58 caliber, while all previous issue muskets were .69 caliber. It was also the first rifled arm intended for widespread issue to all arms of the military. Prior to the M-1855, smooth bore muskets were the standard infantry arm, and rifled arms were reserved for specialty troops and were not issued in significant numbers. It was also the first US military arm specifically designed for use with the Burton Ball (the American modified version of the expanding base French Mini” ball). Finally, the M-1855 incorporated the automatic tape priming mechanism of Dr. Edward Maynard. This mechanical priming system used a varnished paper roll of priming pellets, much like a modern roll of caps used in a child’s cap gun. The system advanced the roll every time the hammer was cocked, placing a fresh primer pellet over the cone (nipple). A sharp cutting edge on the bottom face of the hammer cut off the spent piece of priming tape when the hammer fell. The M-1855 was officially adopted in 1855, but production did not get under way at the Springfield Armory until 1857, and at Harper’s Ferry until 1858. Springfield produced a total of 47,115 M-1855 rifle muskets from 1857 to 1861 and Harper’s Ferry produced another 23,139 between 1858 and 1861. Although most collectors do not know this, the US Ordnance Department did let some contracts for the production of the M-1855 rifle muskets. These contracts went to A.M. Burt, J.D. Mowry, J.F. Hodge, J. Mulholland and A. Jenks & Son. However, the complicated tape priming mechanism slowed tooling and pre-production work, and none of these contractors ever delivered a single M-1855 rifle musket. However, all of them did deliver the simplified M-1861 rifle musket (which eliminated the tape primer system) after the Civil War broke out in 1861. The only contractor known to have completed any M-1855 rifle muskets with a functional Maynard tape primer was Eli Whitney Jr., but these were never part of any official Ordnance Department contract and it is believed the 350 arms of this pattern that he built were all sold to the state of Connecticut. The M-1855 went through a couple cosmetic and functional changes during its production run at the National Armories. Initially it was produced with a long base, long-leaf adjustable rear sight, similar to the ones found on rifled & sighted US M-1842 muskets. It was also originally produced with a brass forend cap. In 1858 a new pattern rear sight was adopted. This sight featured a short base with an L-shaped leaf for 100 and 300 yard shooting and a longer 500-yard leaf. While Springfield started installing the new pattern of 1858 back sights in that year, Harpers Ferry did not start the installation of the new sight until 1859. In 1859 the nose cap was changed from brass to malleable iron and an iron patch box was authorized for installation in the obverse of the buttstock. As with any change in specifications for assembly line produced items, the changes went into effect as stores of older parts were used up. This results in a variety of rear sight and stock forend combinations, as well as a number of older stocks being used on 1859 dated specimens that do not have the patch box cut out. The US M-1855 Rifle Musket was produced with a 40” round barrel that rifled with three broad grooves. The front sight served as a stud for an angular socket bayonet. The stock was of walnut, and the overall length of the musket was 56”, and it weighed in at 9 pounds, 3 ounces without the bayonet. The US M-1855 Rifle Musket saw significant use during the American Civil War. It was the most advanced US made rifle musket in production when the hostilities broke out. The M-1855 initially saw service with most of the US Regular Infantry regiments, but eventually saw issue along side US M-1861 rifle muskets to a large number of regular and volunteer infantry regiments. Although the gun incorporated the Maynard priming system, the majority of Civil War issued M-1855s were fired with traditional percussion caps. This was due to issues with the fragility and reliability of the tape primers.

The US M-1855 Rifle Musket offered here is a VERY FINE+ to NEAR EXCELLENT condition example that was produced at the Springfield Armory in 1859. During fiscal year 1859, the Springfield Armory produced a total of 11,600 M-1855 rifle muskets. The gun features the July 28, 1858 pattern, short base rear sight and the post-April 21, 1859 iron forend cap. The same April 21, 1859 changes included the addition of a iron patchbox, to be inlet in the obverse buttstock. Due to the need to adapt machinery for the inletting of the patchbox and the need to fabricate the patch box covers, the patchboxes were not incorporated into production at Springfield until July 9, 1859. This allows us to know that the gun was produced during the 1859 production cycle, prior to July 9 of that year. The gun is clearly and crisply locked on the lock: U.S. / SPRINGFIELD in two horizontal lines forward of the hammer and 1859 in a horizontal line to the rear of the hammer. The matching date 1859 is stamped clearly and crisply on the breech of the barrel. The tape primer door is clearly stamped with the correct, Springfield pattern spread winged eagle, with 5 arrows & 3 olive branches in its talons. The typical V P (EAGLE HEAD) proof and inspection marks are present on the angled left breech flat. The die appears to have skipped or stuttered during the stamping process, as the marks all bear a slightly shadowed, “double-struck” appearance. This may have been a common occurrence, as the example of the “V / P / Eagle Head” shown in the “Eagle Study” portion of the book The US Model 1861 Springfield Rifle-Musket by Whisker, Hartzler & Yantz shows a similarly “shadowed” Springfield Eagle Head and “V P” proof marks. The butt plate tang is stamped with the typical US mark. The left stock flat, opposite the lock, is stamped with an extremely crisp and clear “finish inspectors’ cartouche, a script FS within a rectangular box with rounded edges. This is correct, and Springfield manufactured M-1855 rifle muskets usually show either an “FS’ or a “HWG” finish cartouche. Interestingly, the gun does not bear the expected script ESA cartouche of Erskin S Allin, the Master Armorer at Springfield Armory. This suggests that for some reason the gun never passed its final inspection by the Master Armorer, and as such was likely sent to one of the states under the Militia Act of 1808, rather than being placed in US Government stores.

The gun is 100% complete and correct in every way and has absolutely no repairs or replacement parts. The complicated and delicate Maynard lock system is mechanically excellent and works crisply and correctly, exactly as it should. A partial roll of original Maynard primers remains in the primer magazine of the gun. The lock shows a lightly mottled brownish patina over its original arsenal bright finish, and also shows some lightly scattered pinpricking and minor surface oxidation. The gun retains the correct original rear sight, complete with correct swept wing style sight leaves. The rear sight retains about 60%+ of its original blued finish, with some minor thinning and loss due to age. The original sling swivels are in place on the triggerguard bow and the middle barrel band, and the original front sight & bayonet lug is in place at the end of the barrel. The original swelled-shank, tulip head ramrod is in place in the ramrod channel and retains good threads on its end. The metal of the gun is extremely smooth throughout, with only some extremely fine and very lightly scattered oxidized peppering and minutes pinpricking present. This is most noticeable near the muzzle of the musket, but in no way detracts from the overall appearance of this wonderful M-1855. The metal has been very lightly cleaned and looks very much like it did when it left Springfield with its “National Armory Bright” finish. The metal is nice and bright, with only the previously mentioned freckled areas of darker, oxidized peppering present. All of the metal remains crisp, with sharp edges and good lines throughout, and the metal is free of any significant scratches or indications of abuse. The only marks in the metal worth noting are a couple of minor impact marks on the left barrel flat. The bore of the rifle rates about EXCELLENT and is extremely bright, with excellent, crisp rifling. The bore appears to be free of any pitting and shows only some light frosting along the length of the bore in the grooves. The iron furniture is slowly developing a very thin, lightly oxidized patina, which could be removed if so desired. The iron buttplate shows light to moderate oxidized pinpricking and peppering, as is often the case on this piece of hardware that was often in contact with the damp ground. The stock rates about VERY FINE+ to NEAR EXCELLENT condition and is extremely crisp. It is full length with no breaks, cracks or repairs present. The stock retains excellent, sharp edges and lines and the wood to metal fit is wonderful. The stock shows on indications of any sanding, or even cleaning. As previously noted the finish cartouche present on the flat opposite the lock is extremely crisp and sharp. The stock does show a number of lightly scattered bumps, dings, and some tiny surface scratches from carry, service and use. There are, however, absolutely no indications of abuse and no repairs are noted.

Overall this is an extremely crisp and very high condition example of one of the most attractive and innovative patterns of US rifle musket ever produced. The lines and visual appeal of the M-1855 have always been very attractive to me, and the unique tape priming mechanism gives these guns much more character than the cookie-cutter, workman-like appearance of the later M-1861 rifle muskets. The gun is 100% complete and correct in every way and is in a really fantastic state of preservation. The M-1855 was the standard issue rifle musket for the US infantry at the beginning of the American Civil War and the majority of the guns saw hard service during the war, especially with the pre-war regular army regiments. All of those factors, along with their relatively limited production numbers, make high condition M-1855s difficult to find for sale. Every Civil War long arm collection needs a M-1855 rifle musket in it, and this very really wonderful example from Springfield Armory that would be very difficult to upgrade, would display wonderfully in your collection and that you will be very proud to own.