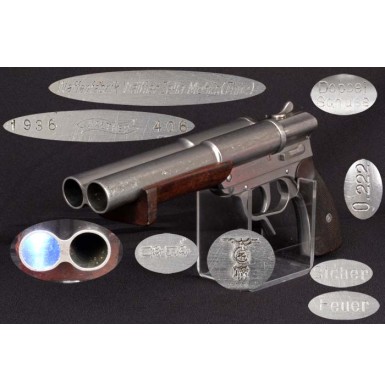 This is a VERY GOOD+ to NEAR FINE condition example of the rather scarce Walther Model SLD - Signal und Leucht Doppelschusssmodel (literally “signal & light double shot model). This double barrel flare pistol was manufactured in 4 bore and accepted 27mm flares with a variety of signaling and lighting purposes. The pistol was adopted by the Kriegsmarine (German Navy) in 1936 and remained in production until the end of World War II, with most estimates placing the total production at slightly more than 4,000 units. The pistol was manufactured from stainless steel (INOX Rostfrei) and had a pair of 9 ““ barrels and a 4 ““ wooden forend to give the user a more secure grip when the pistol was fired. While most German army flare pistols also accepted some sort of grenade or explosive charge, the Kriegsmarine saw little utility for such projectiles and used their flare guns strictly for signaling and illumination. The SLD model has a long association with use on Nazi U-Boats, and the rarity and low survival rate of these guns (with an estimate of less than 100 remaining today) is attributed to the fact that many went to the bottom of ocean with their submarines. As the war progressed, Walther also produced variants of the SLD flare gun in aluminum (about 6,000) to conserve the stainless steel for more pressing manufacturing requirements. The early production SLDs were marked with the classic Walther “banner” and with the year of manufacture. When the Nazis adopted the system of using maker codes instead of maker names in 1940, Walter complied and produced the balance of their SLD signal pistols with their AC code in conjunction with the last two digits of the year of manufacture. As with many Kriegsmarine issued small arms, the SLDs were sometimes marked with fleet inventory numbers. Nordsee (North Sea) Fleet markings consisted of the letter N over an inventory number, usually on the frontstrap or backstrap of the pistol. Ostsee (East or Baltic sea) Fleet markings were of the same style but used an O over the number instead of an N.

This Walther Model SLD Signal und Leucht Doppelschusssmodel is in about VERY GOOD+ to NEAR FINE condition. The left side of the frame is clearly and crisply marked Waffenfabrik Walther Zella-Mehils (Thüir) over the year 1936 and the name WALTHER in the classic “banner logo”, followed by the serial number 406. Under the serial number is a somewhat sloppy, double stamped, early Kriegsmarine acceptance mark, that appears to be the result of the die skipping when it was struck. The symbol is a spread-winged eagle over a swastika in a circle over an “M”. To the rear of the left side is the safety lever, which exposes the word Feuer for “fire”, when in the up position and the word Sicher for “safe” when in the down position. The upper rear portion of the frame has a three-way switch to select the barrels that will fire when the trigger is pulled. The switch is labeled l for “left”, Doppel / Schuss for “double shot” (firing both barrels) and r for “right”. The right side of the frame has a set of (CROWN) / U and a (CROWN) / B proof marks, both turned on their right sides. The backstrap of the pistol is marked with the Ostsee Fleet inventory mark O. 222. The flare gun is mechanically excellent and functions exactly as it should in every way. The under lever, below and forward of the triggerguard released the breech lock, allowing the barrels to be tilted down for loading and unloading, much like a shotgun. The selector switch on the top of the barrel snaps crisply between the “l”, “doppel schuss’ and “r” positions, and functions accordingly. The loaded chamber indicators function correctly as well, and when the trigger is pulled, the selected firing pins release as they should. The frame mounted safety still functions smoothly and correctly, placing the pistol on “safe” or allowing it to fire, depending on its position. The stainless steel frame and barrels are free of corrosion or pitting, but do show some tiny areas of minute, oxidized pinprick freckling. The exterior metal parts do show the expected light handling marks, and minor surface scratches from handling, use and storage that one would expect from a pre-2nd World War military flare pistol. The bores of the flare pistol remain in VERY FINE condition and are mostly bright and quite smooth, with only lightly scattered pinpricking and very minor, lightly scattered pitting noted.The checkered walnut pistol grips are in about NEAR FINE overall condition. They retain mostly crisp checkering with only some light to moderate surface wear and flattening, most of which is near the base of the grip panels. The grips are free of any breaks, cracks or repairs, but do show scattered bumps and dings, and moderate use and wear. The walnut forend is in about GOOD+ to NEAR VERY GOOD condition. It is solid and free of breaks or repairs, but does show about 4” long chip along the top edge, against the barrel. The chip angles from the leading edge of the forend, back toward the pistol frame, and is about ““ deep at the front, running at a uniform angle along the grain of the wood until it stops at the barrel/chamber junction. This is the only defect in an otherwise very nice, completely correct and original Walther SLD signal pistol. A good wood repairman could easily restore this minor defect and make it practically unnoticeable. In all other respects the pistol is 100% complete and correct in every way.

Overall this is a very nice example of a very scarce and desirable World War II Kriegsmarine signal pistol. The gun is a very early, pre-war example with the desirable Walther “banner” logo and very scarce Ostsee Fleet markings. The U-Boat association of these stainless steel signal pistols makes them even more collectible. These rare flare guns have escalated in value dramatically over the last few years, and a number of them have sold at auction recently in the $4,000 to $5,000 price range. This is a great example of a Walther Model SLD Signal und Leucht Doppelschusssmodel with tons of eye appeal that is 100% correct and original, and is priced at about half the price that they have been bringing at auction.