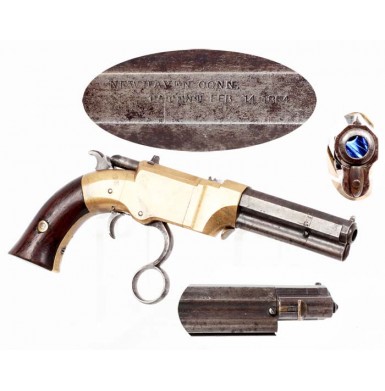 Between 1857 and 1862, some 850 New Haven Arms Company No. 1 Pocket Pistols were manufactured. Due to the success of the name, and no doubt due to how well it worked in advertising and publicity, Winchester continued to market the guns as “Volcanic” pistols, even though that company was defunct. The pistols was advertised as having a 4” barrel, but in reality the octagon barrel was just over 3 “, measuring about 3 11/16” in length from the breech face to the muzzle. Like all Volcanic designs, it was a toggle link, lever action gun. Lowering the lever under the receiver to its “open” position pushed the bolt back against the hammer spur. This action cocked the hammer and raised the cartridge lifter. Pulling the lever back to its “closed” position closed the bolt and shoved the fresh cartridge from the lifter into the breech. It also returned the lifter to its resting position at the bottom of the receiver, where it was aligned with the magazine tube and would receive a fresh cartridge. The magazine tube under the receiver was spring-loaded and held 6 cartridges. The magazine for the longer barreled 6” target pistol held 10. A brass follower pushed the cartridges from the muzzle towards the receiver and the cartridge lifter. To load the pistol, the follower was pulled towards the muzzle, until it had passed a split in the magazine tube. The front 1” section of the tube could then be rotated about 45-degrees to the right, exposing he magazine tube for loading, or unloading. After inserting the cartridges, the front portion of the magazine was rotated back to the closed position and the follower was released. This system fed the improved Hunt’s patent “Rocket Ball” ammunition onto the cartridge lifter to allow the pistol to function. The standard version of the No. 1 Pocket Pistol sold for $12.00 with a polished brass frame, blued barrel and magazine, case hardened hammer and lever and two-piece wooden grips. For an extra $1.50, the pistol could be had with a silver plated and engraved frame. Special order grips, such as ivory, were also available for an extra charge.

This is example of a New Haven Firearms No. 1 Pocket “Volcanic” Pistol is in about NEAR FINE condition. This pistol is serial number 684, and is so marked on the left side of the grip frame, under the grips, and on the interior of the right grip panel. This number makes it s fairly early production pistol, placing it in the first 20% of production, and suggesting that it was probably manufactured circa 1857-1858, during the first year or two of New Haven’s operation. The pistol appears to be 100% complete and correct in every way. It remains in crisp and sharp condition throughout. The pistol retains about 10% to 20% of its original blue on the barrel and magazine, most of which has faded and blended with a smoky blue-gray patina. The metal of the barrel and magazine tube is mostly smooth, with only a handful of small, fingernail-sized patches of minor surface oxidation and pinpricking. The top of the barrel is clearly marked in two lines: NEW HAVEN CONN. / PAT. FEB 14, 1854.. The magazine tube retains its original brass follower and what appears to be the original magazine spring is in place. The follower moves smoothly and the spring retains good tension. The front of the magazine tube rotates smoothly and opens and closes as it should, with no undue stress or strain. The bore of the .31 pistol is in FINE condition and remains mostly bright, with strong rifling and only some lightly scattered pinpricking along its length. The case hardened operating lever retains no traces of the original case coloring, and has a mostly smoky gray patina with scattered areas of dark brown age discoloration and light surface oxidation. The hammer still retains some traces of the original case coloring with darker blues, purple and brown tones in its center, and more pewter colored metal around the edges, where the case coloring has “silvered out”. The action of the pistol works perfectly, and is mechanically excellent. The ring lever operates smoothly, the cartridge lifter raises and lowers as it should and the hammer cocks crisply and releases when the trigger is pulled. The brass frame has a lovely deep ocher patina that is untouched. The pistol is interesting in that the frame was apparently silver plated at the factory, but left un-engraved. The frame retains about 10%+ of the original silver-plating, with the two largest patches being on the bottom of the butt and on the inside of the grip strap. There are also traces of the silver on the lower portion of the backstrap and on the frame as well. The pistol retains its original blade front sight on the top of the octagon barrel, near the muzzle, and the original notched rear sight, dovetailed into the top of the brass frame. Even the screws of the pistol remain in very crisp condition, with only minimal slot wear and no abuse noted. The two-piece grips are in VERY FINE condition. They are free of any breaks, cracks, or repairs and remain solid. There are a couple of very tiny, old chips around the brass grip screw escutcheon in the right grip panel, but these are minor and hardly worth mentioning. The grips retain about 30%+ of their original varnished finished, and other than some minor handling bumps and dings, remain very crisp and sharp. The fit of the grips to the frame is excellent, and as mentioned above, the right grip is numbered to the pistol on its interior, while the left grip is unmarked.

Overall this is a really attractive, and unmolested example of a New Haven Arms No. 1 Pocket “Volcanic” Pistol. The gun has great eye appeal and is in very crisp condition with fine markings and grips, and a mechanically excellent action. With only 850 of these little pistols produced, and the majority of them plated and engraved, it can be hard to find an un-engraved example. This one is even more interesting in that it was factory plated, but not engraved, which is a true rarity. This would be a great addition to any collection of Civil War era pistols and is an essential bookend to a collection of 19th century American cartridge pistols. Many of these little guns went off to battle in the early days of the American Civil War in the pockets of young soldiers and officers, and this gun would be equally at home in a collection that represents the many early weapons that went to war from home. One way or another, this is a scare and desirable pistol that was the direct predecessor to the famous Henry Rifle and deserves a place in a collection of fine antique arms.