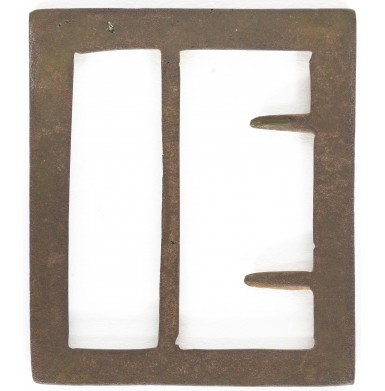 This is a very attractive and untouched dug example of a Standard Confederate Frame Buckle, one of the simplest and cheapest plates produced for use by the Confederacy during the course of the Civil War. These sand cast plates were produced in large numbers for use by enlisted Confederate soldiers, particularly the infantry. Like most of the frame buckles produced, the plates vary slightly in overall dimensions from example to example and often show minor irregularities and casting flaws. This plate is quite similar to Mullinax #173 as depicted in his book Confederate Belt Buckles and Plates. This example measures nominally 62mm by 71mm with an average thickness of about 2.2mm with a fairly wide variance of roughly .5mm plus or minus. The center post of the buckle is nominally 3.5mm thick, with about a .2 plus or minor variation. The buckle uses two fixed prongs that extend nominally 12mm from the frame to engage holes in the leather belt, allowing adjustment.

The plate has a rich, heavily oxidized brown patina with some bronze toning and retains a thin surface layer of uncleaned dirt. As with all of these simple CS plates, the metal shows scattered minor flaws and tool marks from the file finishing after casting. The plate shows some very minor dings and bends from ground action but is essentially flat with no significant damage from use or from spending decades under ground.

Overall, this a really attractive, untouched and unmolested example of a Standard Confederate Frame Buckle. The plate looks great and has no repairs or imperfections that affect is appearance or displayability in any way. This is a lovely example of one of the classic Confederate plates and is one you will be proud to own and display.