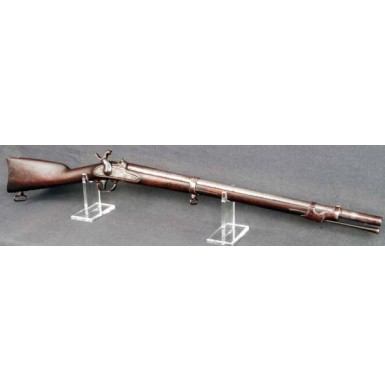 This is a nice, untouched example of the relatively scarce US M-1847 Artillery Carbine aka musketoon. The M-1847 family of carbines included an iron mounted artillery carbine, a brass mounted cavalry carbine and brass mounted sappers & miners (engineer’s) carbine. The artillery carbine was adopted in March of 1847, and the majority of production was between fiscal year 1848 and 1855. Bear in mind that the US Arsenals operated on the same fiscal year system as the Federal Government, and fiscal year 1848 began on July 1, 1847. A total of 3,359 of the artillery carbines were produced during their production run at Springfield Arsenal. The M-1847 family of carbines were not produced at any other national arsenals or by any contractors. The guns were .69 caliber, muzzle loading, smoothbore percussion carbines with 26” barrels, an overall length of 41” and two iron barrel bands. By the late-1850’s the carbines were considered obsolete and many were sent to the various states under the Militia Act of 1808. In fact by December of 1861 the Washington Arsenal showed only 36 smoothbore carbines (off all types) in inventory. Some of the artillery and cavalry musketoons were in use by US troops early in the war, but were quickly replaced by more modern arms. In December of 1862 a total of 947 smoothbore musketoons of all patterns were in use by US troops, including the with 5th, 12th & 13th Missouri State Militia Cavalry, the 5th Kansas Cavalry and the 4th Texas US Cavalry “ which has 410 musketoons. However, by September of 1863 only 234 smoothbore “musketoons’ were still in the field with US troops. The guns that were sent to Southern State arsenals during the late 1850’s clearly saw field service during the war, but the lack of good Confederate Ordnance records makes it difficult to know exactly how many of the M-1847 carbines were used, versus other .69 smoothbore carbines, often produced from damaged and altered muskets.

The US M-1847 Artillery Carbine offered here is in about VERY GOOD and completely untouched attic condition. The gun has a somewhat splotchy, but untouched brown patina over the barrel and iron furniture, and the stock has a dark, un-cleaned look to it. The metal is a combination of smooth, brown metal combined with patches of oxidation and minor roughness. The lock is marked with a (Spread Winged Eagle) / US forward of the hammer and in three vertical lines: SPRING / FIELD / 1847 to the rear of the hammer. This indicates that at least the lock was manufactured between the acceptance of the M-1847 in March of 1847 and June 30, 1847 “ the end of fiscal year 1847. This makes the gun one of the very first carbines of this pattern to be produced, and means that it might have even seen Mexican War service at the end of that war. There is no visible date on the tang of the barrel, due to wear and oxidation. The breech is marked with the usual V / P / (Eagle Head) proof marks. The top of the buttplate is marked with the usual US mark. Internally, there is a number 3 stamped on the bottom of the barrel and a matching 3 in the barrel channel. The bore of the carbine is dark and dirty, with scattered pitting over its entire length. The lock of the musketoon functions perfectly and remains crisp in its operation on all positions. The musketoon retains its original trumpet head ramrod, which is full length and retains its threads on the end. The gun also retains the original sling swivel on the toe of the buttstock and on the rear most barrel band. The upper barrel band retaining spring is a very old replacement and appears somewhat crude, indicating field replacement “ possibly by a Confederate soldier. The original bayonet lug is in place under the muzzle, allowing the US M-1835/40 socket bayonet to be fixed to the musketoon. The stock is in about GOOD to near VERY GOOD condition. It does show significant wear and numerous bumps, dings and dents from use. There is a short crack on the right side of the stock, about 3.5” long, running diagonally from the front of the rear barrel band spring up to barrel channel “ it is relatively hard to see and appears stable, with an old glue repair visible with the barrel removed. There is also a short crack from the rear lock mounting screw to the barrel channel and a very short, minor grain crack directly behind the lock mortise. Otherwise the stock is in solid, complete condition with no other issues that I have discovered. None of the minor cracks mentioned significantly detract from the overall all attractive, well-used look of the carbine and only further indicate that is saw significant military service.

Overall, this is a nice looking, un-messed with example of a scarce US military musketoon. This one has a particularly appealing and attractive early production date, and the gun could well be a veteran of both Mexican War and Civil War combat. These carbines rarely come on the market in complete and unaltered condition, without missing or replaced parts. Any serious US long arms collection needs one of these guns to complete their pre-Civil War carbine display.