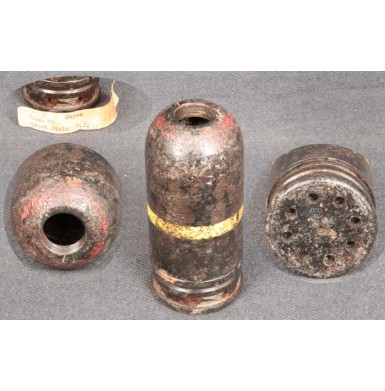 This is a very nice example of a World War II Japanese 50mm Knee Mortar Round, designated as the TYPE 89. This is a High Explosive (HE) round, indicated by the yellow paint band around the projectile. The red paint at the top of the projectile indicates that it was a Japanese army mortar round. The Japanese Navy painted the tips of their mortar rounds green. This particular round appears to be a fired, battlefield pickup that did not explode. The round originally had a copper band around the base, and when fired the propellant gasses passed through the holes around the edge of the base and expanded the copper sabot to engage the rifling of the knee mortar tube that it was fired from. The Type 89 “Knee Mortar” was designed to give the Japanese soldier a more powerful weapon with longer range than a hand grenade or rifle fired grenade, but without the need to dedicate an entire squad to the carrying and operation of a larger, traditional mortar launcher. Even though a single soldier could easily operate the weapons system, it was typically operated be a total of three, which allowed a rate of fire approaching 25 rounds per minute. The term “Knee Mortar” was coined by Allied troops, who thought the small mortar with the curved base plate was designed to be fired from the knee or thigh of the soldier. In fact the mortar was designed to be propped against the ground or a log, at a fixed 45-degree angle. Adjustments to the size of the expansion chamber in the rifled tube were intended to allow the mortar to be “aimed” for longer or shorter shots.

The round is inert and has no fuse system. The body of the iron round is lightly pitted all over and retains strong traces of the red paint at the tip and about 50% of the yellow paint around the body of the round. The iron is slick, smooth and stable, and may have been lightly coated to prevent deterioration at some point in time. There are a couple of small patches of light surface oxidation on the round, which could be cleaned off easily if so desired. The lot or inventory number 6089 is stamped into the body of the round and opposite the number is a single 9. The round is about 4 ““ in overall length and is roughly 2” in diameter. A very old, typed paper label accompanies the round and reads in three lines:
Japan
50mm 89
Clark Field P.I. WW-2
The round was apparently recovered from Clark Field in the Philippine Islands. The label was found inside the mouth of the round, and appears to have been attached to the round at some point in time. This is a really nice displaying examples of a Japanese Type 89 50mm Knee Mortar projectile. This would be a neat addition to any collection of World War II Japanese militaria. The fact that the mortar round may have been recovered from Clark Field in the Philippine Islands makes it even more interesting. This is a great piece of militaria that displays wonderfully and is very affordable.