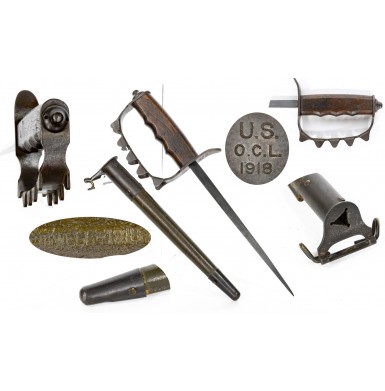 The U.S. Model 1917 Trench Knife was the first “Knuckle Knife” to be officially adopted and issued to any nation’s military forces. It was developed for use in the horrific trench warfare that typified the stalemate on the Western Front during World War One. The knife was designed by Henry Disston & Sons (H.D. & S.) of Philadelphia, PA and was produced by them, as well as by three other makers, including The American Cutlery Company (A.C. & CO), Oneida Community Ltd (O.C.L.) and Landers, Frary & Clark (L.F. & C.). The knives were produced in two primary variations, with some minor differences in the arrangement and design of the knuckle “spikes” and the attachment of the rear of the knuckle bow to the hilt. In all cases, the knives were manufactured with nominally 9” triangular blades that were intended exclusively for stabbing. The blade length specification was developed to make sure the blade could penetrate the heavy overcoat and all of the accouterments and equipment which were worn by the typical Imperial German infantryman. The crossguards were made of stamped steel, with pyramid shaped projections along the exterior of the guard (LF&C) or stamped serrated projections along the edge of the guard. With both variants, the projections were stamped as part of the guard in the forming process and were not separately attached to the guard. The pyramid projections were simply stamped out of the center of the guard, and the serrated “dragon tooth” flanges were die cut as part of the guard and then pressed into position. Both the blades and the crossguards were blued, and the grip was made of walnut. The knives were carried in leather scabbards that had a green painted finish. The scabbard mountings were of blued steel, with the throat having a wire mount for attaching the knives to the eyelets of the US web belts in use during that era. The LF&C produced M1917 is the most common variant of the knife encountered today, while the A.C. & Co produced knife is the most commonly encountered of the “dragoon tooth”, flanged-guard variant. The knives produced by Oneida and Disston are extremely scarce and are practically never found on the market for sale.

The example of the US Model 1917 Trench Knife offered here is in VERY FINE condition and is an extremely scarce example of the knives produced by Oneida Community Ltd. This variant is like the original Disston design, with the flanged, serrated knuckle guard projections, not the pyramidal projections found on the more common LF&C knife. Also, like the Disston design, the pommel cap is of the threaded variety, a system that was retained on the American Cutlery production model as well. This threaded cap secured the blade to the guard and walnut grip. LF&C used a simple compression peen to secure the blade to the guard and hilt. It is generally believed that the LF&C variant is most common because their simpler stamped pyramid guard and peened pommel cap allowed them to produce the knives more quickly and more cheaply, likely resulting in more orders for their version of the knife.

Oneida Community Ltd was initially established as a maker of silver and flatware that grew out of the utopian Oneida Community established in 1848 by John Humphrey Noyes in upstate New York. Although the utopian community failed and came apart at the seams during the 1870s, many of their community businesses remained solvent and continued in business well into the 20th Century. In the early 1900s, Oneida Community Ltd increased advertising and brand recognition efforts, and eventually made themselves one of the best known and most recognized silver and flatware manufacturers in the United States, and eventually the world. During World War I, the company supported the war effort by manufacturing ammunition clips, lead plated gas shells and of course, combat knives. In 1935, they changed the company name to Oneida, Ltd and the company remains in business to this day.

This US Model 1917 Trench Knife is clearly stamp marked in three lines on the front of handguard:

The handguard retains about 85%+ of the original dull military blue finish, with some thinning, fading and silvered loss from high edge wear. The faded and lightly worn areas of the guard and hilt are blending with a lightly oxidized plum-brown patina. The blued steel blade is full-length, measuring 8 13/16”; nominally 9”. The original tip is in place and there is no indication that the knife blade has been re-tipped or reshaped in any way. The blade remains smooth throughout and is free of any pitting or roughness. The blade retains about 95%+ of the original bright blue finish, with only the most minor scuffing, thinning and minor high edge loss along the blade, the result of wear from being inserted in and removed from the steel mounted scabbard. The blade also shows some very lightly scattered freckles of the most minor surface oxidation, shot throughout the blue on the blade. The walnut grip is in about VERY FINE condition as well and is free of breaks, cracks, or repairs. The grip retains a feathery, open grain appearance with no signs of having been sanded or refinished. The grip does show a few very minor bumps, dings, and handling marks, as would be expected, but remains extremely crisp and in wonderful condition. The scabbard is in VERY FINE condition as well. The scabbard is 100% complete and all the stitching remains as tight as when it was made. All the steel mountings are in place and retain about 80%+ of their original dull blued finish, with some thinning and fading, mixed with a lightly oxidized smooth plum-brown patina. The top of the throat shows some scattered minor surface roughness but no pitting. All of the original blackened brass rivets that retain the throat and drag are in place, as is the wire belt mount. The two rivets in the drag are slightly loose but remain securely attached to the scabbard. The steel mounts are both stamped with an M.S. and the top of the throat is stamped H.E. The scabbard body retains nearly all of its original olive-drab green painted finish, at least 90%+ with no real crazing or significant wear on the surface, only a few flecks of minor paint loss. The scabbard is marked along the upper portion, near the seam: JEWELL 1918.

The firm of Jewell, Pliny & Sons was established in Hartford, CT around 1845, where it was listed as a leather dealer, and by 1849 was listed as a maker of leather machine belts. During the American Civil War they received contracts for at least 30,000 sets of infantry accoutrements and remained in business through the World War I era.

Overall, this is really fantastic displaying example of one of the rarest of the US Model 1917 Trench Knife variants. All variants of the flanged “dragon teeth” knives are less common than the typically encountered LF&C pyramid guard knives. The Oneida made knives are extremely scarce and simply do not appear on the market with any regularity. This one is in such wonderful condition that it would be very difficult to upgrade and would be a wonderful centerpiece in any advanced military fighting knife collection. This is simply a fantastic knife that will absolutely satisfy the most condition conscious, advanced military knife collector. This is one rare knife that you will be extremely proud to own, and your collecting friends will be pleased to have the opportunity to handle in person. During the last twenty years this is only the 3rd example of an Oneida produced US M1917 Knife I have had the opportunity to offer for sale, so don’t miss your chance to add it to your collection.