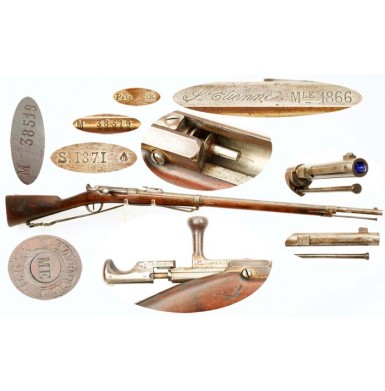 This is a VERY FINE and complete example of the French Le Fusil Chassepot Mod’le 1866, or more simply the Chassepot rifle. The Chassepot was France’s first “modern” bolt action rifle, and was adopted in response the Prussian adoption of the Dreyse “Needle Gun”. Both rifles were in fact “Needle Guns”, with long, thin firing pins that penetrated a self-contained, combustible paper cartridge to detonate the primer. Both rifles had a reputation for being somewhat fragile, as the needle firing pins were easily broken in service. The Chassepot did have three primary advantages over the Dreyse design. The first was the location of the primer at the rear of the cartridge (allowing for a shorter needle), instead of the in the middle of the cartridge as in the Prussian ammunition. The second was the use of a smaller diameter bullet that contacted the rifling directly, instead of using a papier-mâché” sabot as the Dreyse design did. The final improvement was the use of internal obturation. This was in the form of an expandable India rubber gasket. The gasket sealed the chamber completely during firing, reducing gas leaks and increasing the chamber pressure and thus the velocity of the projectile. The obturator was somewhat fragile and needed to be replaced on a regular basis to insure that the breech was securely sealed. The Chassepot was chambered for an 11mm cartridge (about .44 caliber), making it one of the first nationally adopted military rifles to adopt a modern “small bore” caliber. By contrast, the Dreyse Needle Gun used a much larger 13.6mm cartridge (about .535 caliber). The Chassepot was the standard French military long arm from its adoption in 1866, through 1875, when it was replaced by the metallic cartridge M-1874 Gras rifle. The Chassepot served as the premier French military rifle during the Franco-Prussian War of 1870-1871, but there were simply not enough of the rifles available for the French forces during the war, and many of the soldiers fought the war with obsolete percussion muzzleloaders or breech loading altered percussion muskets using the Tabati’re system. The French eventually produced about 1.5 million of the rifles during its service life. After the adoption of the Gras rifle the majority of the Chassepots in inventory were altered to M-1866/74 Gras cartridge rifles. As a result, unaltered, original condition Chassepot rifles are particularly hard to find, especially in the United States.

The M-1866 Chassepot rifle offered here is in about VERY FINE condition. The gun is 100% complete, original and correct, with only the India rubber obturator missing. The matching serial number M 38519 is marked throughout the rifle, including on the left barrel flat, on the top of the bolt handle, on the saber bayonet lug, on the reverse of the stock and on the cleaning rod. The last two numbers of the serial number 19 appear on the bottom of the bolt handle and on the cocking piece. The M prefix to the serial number indicates that the rifle was manufactured at the Imperial Armory at St. Etienne. That armory used the pre-fix letters F through Q. Other French National armories used other letter prefixes. Including A-C for Ch’tellerault, D and E for Mutzig, R through T for Tulle and U & V for Cahen-Lyon. The right side of the breech is marked with the date of manufacture, S 1871, which means that this rifle is from the era of the Franco-Prussian War (July 19, 1870 to May 10, 1871). Unfortunately, the stock keepers roundel shows the gun was taken into inventory in November of 1871, so the rifle was made just after the war, but is still of the era. The right side of the breech is also marked with the initials M A for Manufacture d’Armes. Prior to 1870 the mark had been M I, for Manufacture Imperiale indicating the rifle was manufactured under the rule of NapoL’an III. After 1870 and the end of imperial rule, the marking was changed to the one found on this rifle. The action of the rifle is 100% functional and works as it should. The needle is in place and unbroken, but the original India rubber obturator is missing, which is quite typical on these guns. The rifle retains both of its original sling swivels, as well as the original iron mounted leather sling. The sling remains pliable and usable and certainly adds significantly to the display of the rifle. The original long-range rear sight is in place as well and remains fully functional. The original cleaning rod is present in the channel under the barrel, and is correctly numbered to the rifle. The rod is full-length and threaded on the opposite end. The exposed metal parts of the rifle have a medium pewter gray patina, with scattered patches of slightly darker brown surface oxidation and discoloration distributed over all of the metal surfaces. The metal is essentially smooth, with a few evenly distributed patches of lightly oxidized salt & pepper pinpricking over metal. The receiver is crisply and clearly marked: MANUFACTURED A / ST. Etienne MLE 1866 on the left angled receiver flat. The buttplate and barrel bands also show a few tiny patches of minor surface oxidation as well. The bore of the rifle is in about FINE condition and remains quite bright with crisp rifling along its entire length. The bore does show lightly some scattered pitting along its entire length, but nothing severe. The interior of the chamber is bright and crisp as well. The stock rates about VERY FINE to NEAR EXCELLENT. The stock is full length and free of any breaks, cracks or repairs. The original boxwood French government ownership insert is in place in the middle of the right side of the buttstock. The stock has not been sanded and all of the French military ownership, inspection and storekeeper’s marks remain crisp, clear and very legible. It reads MA in the center on the boxwood plug, and B. S. NOVEMBRE J. 1871 in the ring surrounding it. The stock also shows several crisp arsenal inspection marks on both sides of the butt. The original stock serial number, M 38519 (which matches the rest of the gun) is present on the reverse buttstock, and is crystal clear. The stock is made of dark, tightly grained walnut, and retains a fine military oiled finish. There are several small nicks in the bottom of the stock that almost look like Old-West era "kill marks", but are probably just some scars from use in the field. Otherwise, the stock shows only a handful of bumps, dings and rubs from handling and use over the years.

Overall, this is a really attractive, 100% complete & correct example of a Franco-Prussian War era French Le Fusil Chassepot Mod’le 1866. The rifle retains its original needle, and has all matching numbers throughout. The stock is outstanding and very crisply marked. If so desired, the light patina on the metal could be carefully cleaned and the end result would be a near mint Chassepot. This rifle would be a very nice addition to any collection of early bolt-action military rifles. It is a very interesting transitional military arm that bridges the gap between percussion and early breech loading conversion muskets and truly modern metallic cartridge bolt action military rifles.