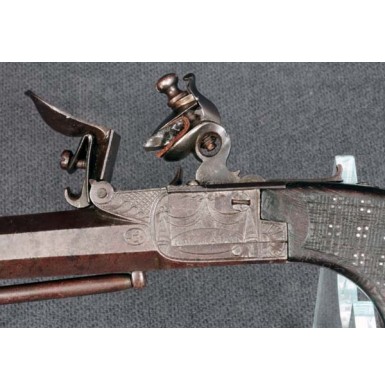 This is a really fantastic little flintlock pocket pistol by the famous Belgian gunmaker Guillaume Berleur. Berleur was listed as an arquebusier et fournissieur (gunsmith & contractor) in Li’ge, Belgium and was active from about 1780 until about 1840. Berleur’s reputation for quality arms was significant enough for him to be brought to France around 1800 to work at the Imperial Armory at Versailles, directly under renowned arms maker Nicholas Noël Boutet. Boutet (b1761-d1833) was made the director and master armorer of the Imperial Armory at Versailles around 1792 and was commissioned to manufacture some of the most expensive, highest quality and lavishly embellished guns ever made. To this day, Boutet made arms are some of the most expensive and highly sought after arms in the world, often selling for mid to upper 6 figure prices. Boutet’s arms are found in some of the most famous museum collections in the world, including the Metropolitan Museum of Art. Berleur was not to be outdone, and his work is equally high quality and made with great finesse and attention to detail, if not always with the lavish embellishment of Boutet’s arms. However, Berleur arms are also found in some of the highest quality collections in the world, and one of his eprouvette’s (powder testers) is included in the Chicago Art Institute’s collection.

The lovely little pistol by Guillaume Berleur offered here is a perfect example of his work, showing his ability to enhance an otherwise simple and utilitarian pistol, without making it ostentatious or exceedingly ornate. The pistol was likely manufactured around 1810 (+/- about 10 years). This pistol is in VERY GOOD+ to NEAR FINE condition. The pistol is approximately .45 caliber and the 3 1/8” octagon is rifled with eight very narrow grooves that exhibit a very slow rate of twist. The pistol is about 6 ““ in overall length and features a typical late 18th Century / Early 19th Century boxlock flintlock action with a concealed trigger. The gun has a sliding safety mounted on the top of the grip, which allows the hammer to be locked in the half cock position, keeping the pistol safe for pocket carry. When the safety is released and the hammer is fully cocked, the concealed trigger extends from the lower portion of the action, allowing the pistol to be fired. The action of the pistol works perfectly on all positions, the folding trigger works as it should and the frizzen remains tight and functions as it should as well. The pistol has a smooth plum-brown color over all of the metal surfaces, with some small, scattered patches of very light peppering, pinpricking and the tiniest patches of very minor surface oxidation. The octagon barrel retains sharp edges over their entire length. The action shows attractive, yet simple decorative engraving on both sides, with attractive swags that highlight the name BERLEUR on the right side and GUILLAUME on the left. The bottom of the frame is crisply engraved with attractive floral & pineapple motifs, with the engraving covering the bottom of the concealed trigger as well. There is a very tiny chip of metal missing from one of the upper corners of the trigger, which is well illustrated in the images below, but in no way diminishes the overall displayability of this wonderful little pistol. The left barrel flat is marked with the standard Li’ge commercial proof of the era. The original iron ramrod is still present under the barrel, and is retained by a single iron thimble near the muzzle and a small stop with a threaded center, near the barrel/frame juncture. The rod has a button head for loading and a threaded end to mate with the retaining stud, as well as allowing it to accept cleaning implements. The one piece, bag shaped grips are in about FINE overall condition and are free of any breaks, cracks or repairs. The grips show light wear from actual use and are nicely carved with a recessed backstrap and toe, and further enhanced with light geometric line checkering on both of the flat sides. The most striking feature of the grips are the numerous small metal pins that are inlaid into the grips in a repetitive pattern of four pins, forming a square. There are in excess of 200 of these decorative pins inlaid into the grips. This style of grip enhancement appears on many of Berleur’s more expensive pistols, including some of his finest cased sets and clearly shows Boutet’s aesthetic influence. This helps us to date the gun to being post 1800, and an example of Berleur’s work after starting to work at Versailles. It appears that while he worked at Versailles he also continued to make arms to retail from his Li’ge location.

Overall this is a really attractive and untouched example of the work of a highly regarded Continental gunsmith of the Napoleonic Era. Rarely do collectors get an opportunity to own a gun made by such a famous European maker, whose work is featured in significant museum collections, without spending a very large amount of money. This lovely little pistol is priced well below what a gun of this importance is probably worth, and will be a treasured part of your collection of elegant flintlock pistols.