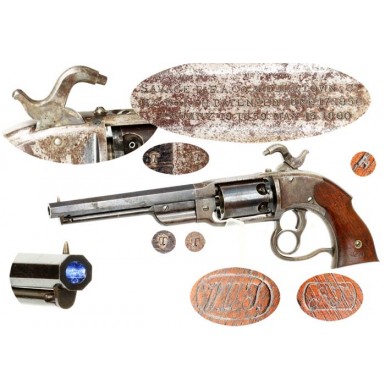 The Savage “Navy” self-cocking revolver is one of the weirdest, and possibly most ungainly handguns of the Civil War era, but also has one of the most recognizable profiles. The .36 caliber, 6-shot revolver had a 7” octagonal barrel and an innovative ring-cocking action and a moving gas seal cylinder. The gun featured a unique ring shaped cocking lever inside the heart shaped trigger guard, which was used to advance the cylinder and cock the hammer. The shooter could then fire the gun with the traditional trigger. The design was similar to the lock work employed in William Tranter’s “double trigger” revolvers. The gun was the final version of a family of self-cocking revolvers that were built upon the “Figure-8” design of JS North. Beyond its unique action, the gun was revolutionary in that was a “gas seal” revolver. The cylinder moved forward when the action cocked, and a recess in the chamber mouth engaged the tapered forcing cone at the rear of the barrel. The effect was a gas seal between the chamber and the barrel, which practically eliminated the loss of gas and pressure from the usual gap between the barrel and cylinder. This meant that the gas created from the ignition of the powder charge was more effectively converted into propulsion for the bullet. This increased the velocity of the bullet for a given powder charge over convectional revolver designs, which allowed much of the propulsive force to escape in the space between the cylinder and the barrel. This innovative design would not be revisited again on a widespread basis for a military revolver until the adoption of the M-1895 Nagant revolver by the Russian military. From the very beginning, the revolver had been intended as a martial arm by its inventors and manufacturers, and significant effort was put forth in the years preceding the war to obtain a US military contract for the innovative, if somewhat cumbersome revolvers. With the coming of the Civil War, the need for revolvers outweighed any misgivings that the military may have had about the design, and the coveted contracts were almost immediately forthcoming. The state of Massachusetts procured 285 of the Savage revolvers early in the conflict. Additional arms were sold to military outfitters and New York based arms retailers like Schuyler, Hartley & Graham and William Syms & Brothers. Both of these companies sold Savage Navy revolvers to the US government during early 1862, for as much as $25 per gun. The Savage Revolving Firearms Company secured its first official US military contract directly with the US government on October 16, 1861. This contract called for Savage to deliver 5,000 pistols between October 1861 and March 1862 at the price of $20 per revolver. Another contract was received from the government in November of 1861 to supply an additional 5,000 revolvers, at $20 each, between November 1861 and May of 1862. Savage completed their initial contract in a timely fashion, but had trouble delivering the guns for the second contract on the agreed to schedule. The second contract was temporarily voided by the Ordnance Department, but after negotiating with Savage, an agreement was reached where the 4,500 outstanding guns from that contract would be delivered at the lower rate of $19.00 per pistol. The deliveries under the second contract were completed by July of 1862. Of the approximately 20,000 Savage “Navy” models produced during the Civil War, the US Ordnance Department took delivery of 11,384 of the guns, and the Navy took delivery of 1,126. The balance of approximately 8,500 guns were offered for civilian sale, although most of those revolvers no doubt ended up seeing action during the war as well. The pistols saw significant field service during the war, and were issued to at least twenty-six different US cavalry regiments and were listed among the arms of some half dozen or more Confederate cavalry regiments. US volunteer cavalry regiments that were issued Savage Navy revolvers included the 6th, 10th & 13th Illinois, the 5th & 15th Kansas, 11th Kentucky, the 3rd, 4th & 7th Missouri, 7th New York 3rd Ohio, 7th Pennsylvania, 1st & 2nd Wisconsin, 1st Vermont and the Potomac Brigade. The revolvers were also issued to the 1st through 9th Missouri State Militia Cavalry. The two regiments who carried the most Savages on their ordnance rolls were the 4th Missouri State Militia Cavalry with 714 and the 2nd Wisconsin with 400. Confederate cavalry units that listed the Savage Navy among their arms were the 11th Texas, 7th Virginia, and the 34th & 35th Virginia Cavalry Battalions. After the war, the Ordnance Department disposed of the Savage Navy revolvers rather quickly. They sold some 773 during 1866 at prices varying from $1.50 to $3.45 each. During 1875, they sold an additional 3,951 of the revolvers for prices as low as $0.35 to as high as $0.58 each; a far cry from the $19 to $25 each they paid during the war years.

Overall this a really great example of a scarce and desirable, martially marked Savage Navy revolver, in fine condition; significantly better condition than the large majority of surviving examples. Finding a Savage Navy with any amount of original finish is very difficult, and finding a martially marked example that is this crisp, with such sharp and well-marked grips is a real rarity. Even though the gun remains in such very nice and crisp condition, it clearly saw at least some real-world use and is sort of the perfect balance between a minty gun that saw no action and a heavily used and abused gun that is now in rough shape. The pistol is mechanically excellent, is extremely well marked and displays wonderfully. This is a Savage Navy that is head and shoulders better than the ones that are seen for sale these days and it would take a lot of money and luck to find one that was crisper with more finish and such fine grips. This is a really great, no excuses, revolver that will be a wonderful addition to any Civil War handgun collection, that you will certainly be very proud to own and display.