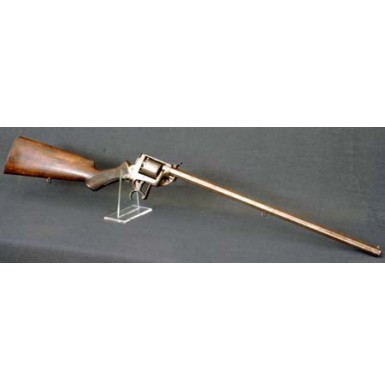 Over the years I have had the opportunity to offer some amazingly rare guns, some of which were produced in quantities of less than 500. However, I believe that this is the rarest item I have had the pleasure to offer the Civil War and Antique Firearms collecting community. Offered here is a Tranter Revolving Rifle. I will have to admit that other than a couple of pictures, this is only the second one that I have ever seen (the other was in a museum). I think the overall rarity of the gun is best attested to by the letter from the greatest of all the Antique Firearms Guru’s, Norm Flayderman, which states in part: Congratulations on your acquisition of a rare revolving rifle”..very much regret I am unable to add much information about it for you” spent a bit of time doing research about it but came up empty handed”. This letter from Norm Flayderman is only part of the folder of information that will accompany this rifle to its new home. The research and correspondence included was all the result of the work of the previous owner of the rifle and makes it clear that these are extraordinarily uncommon weapons that are rarely encountered. The previous owner’s research also indicates that this is the lowest serial numbered Tranter revolving rifle known to exist. It is serial number 117T and previously the lowest documented revolving rifle serial number was 214T. It appears that the revolving rifles and carbines were produced in their own serial number range, as Third Model revolvers appear at approximately #7000T and continue from there. The gun is also unique in that most of the known Tranter revolving rifles known (and there are not many) incorporate a hammer shroud, screwed into the frame, over the hammer, giving the gun a hammerless appearance, much like a Smith & Wesson “Lemon Squeezer”. According the definitive authority on Tranter arms, author Ron Stewart of New Zealand who wrote The Firearms of William Tranter, only two other examples of the revolving rifles (with this being the 3rd) are known without the shroud and without any holes in the frame to accommodate the screws for the shroud.

In many ways this is a typical example of a 3rd Model Tranter Revolver, except for the 21 1/8” long octagon barrel and the extended wooden pistol gripped buttstock. The gun is a classic William Tranter 54-bore (approximately .42-.43 caliber), 5-shot percussion-revolving firearm, circa 1856-1858. The gun has the distinctive Tranter patent double trigger mechanism. The lower trigger, beneath the trigger guard, revolves the cylinder, cocks the hammer and locks the action, while the inner trigger engages the sear to fire the gun. While Tranter revolvers usually have very nice, crisp triggers, this rifle has one that is almost match grade; truly light and crisp. The action of the rifle works perfectly, with excellent, smooth mechanics and timing. The gun is equipped with its original folding-leaf rear site as well as the original dovetail mounted front site. The left side of the gun has the standard 3rd Model loading lever, which is held in place and pivots upon a single screw. The loading lever is secured by a friction latch that is mounted on the barrel at the end of the lever. The top of the barrel is clearly marked with the retailer name: B COGSWELL 224 STRAND LONDON. The firm of Benjamin Cogswell Jr was located at 224 Strand in London from 1842-1863, when they became COGSWELL & HARRISON. From 1842-1856 they are listed as a GUN & PISTOL WAREHOUSE and after 1856 simply as GUN MAKERS. The firm continues in business to this day, and some correspondence from the current firm is included with the rifle. It is unlikely that Cogswell produced the gun, but rather simply acted as the retailer. Cogswell and Tranter had a long history of doing business together. The gun also retains the original sling swivel loops on the barrel and the wooden buttstock. These swivel loops are almost identical to those encountered on LeMat revolving rifles. The metal is in Very Good condition, showing only the most minor scattered peppering and pinpricking. The metal is essentially devoid of finish, although some strong and attractive brown traces of the original Damascus twist finish remain visible on the barrel. The bore is in about good condition, and is fairly dark and somewhat dirty. However, it retains decent 5-groove rifling and would probably improves with a good bronze brush scrubbing. The cylinder chambers are dark and dirty, and there is no doubt that is gun was used a great deal, but was clearly always cared for. All of the original cones (nipples) are present and are on quite good condition. All of the markings remain sharp and crisp, most especially the dual London proof marks on the barrel and the London proofs located between the chambers of the cylinder. The lower right side of the frame is marked: W. TRANTER’s PATENT No 117 T. The left side of the double trigger is marked W TRANTER. The rifle has a very distinctive large, flat fronted trigger guard that allows the left hand to use that as a grip point when using the weapon. This kept the left hand from being placed forward of the cylinder where is could be severely injured in the case of a “chain fire” from the cylinder. The grip frame has the standard high arch grip typical of Adams and Tranter style handguns. There is a very small repair to the very bottom of the grip strap frame, where is apparently cracked through the stock screw mounting hole. The crack was brazed from the inside of the grip strap to repair it and this in no way effects stability or the displayability of the rifle, but it is mentioned for accuracy. The metal of the gun has a pleasing, dull gray appearance, with scattered, splotchy areas of light brown patina and some old dried grease or oil. The wooden buttstock rates about Good + to Very Good, as refinished. The stock shows wear and some flattening to the checkering of the pistol grip section, which is consistent with the metal wear and indications of use throughout the rifle. The buttplate is a civilian style sporting buttplate of blued steel and the grip cap on the pistol grip appears to be of horn or a similar material, which is also typical of civilian sporting arms of the era. There were two types of Tranter revolving rifle buttstocks “ this style with the Tranter pistol grip and a less common straight wooden style with a metal “pistol grip” extension screwed into the stock. This stock appears to have been lightly sanded and refinished at some point, which is two bad, as the interior of the stock has the deep, lovely walnut color we would expect to see on a typical Tranter revolver grip. Like the revolver grips, the stock is one piece and inlet for the back strap and grip strap. The stock does appear to have a couple of replaced screws, one in the bottom of the buttplate and one in the grip strap. These are very minor items, but again are mentioned for exactness. Other than the two screws, the stock furniture appears to be completely original. There is some minor gapping at the frame to stock fit, but this could well be simple shrinkage, combined with minor crack to the lower grip strap, thus altering the geometry of the fit slightly.

While I can not in any way prove that this weapon was even on the North American continent during the American Civil War, it is safe to say that such a weapon would be highly prized by combatants on either side. We know that the Confederacy specifically contracted for the production of LeMat revolving long arms and no doubt would have been glad to acquire any revolving rifle that they could. A very similar Adams revolving rifle is in the collection of the Charleston Museum in Charleston, SC and is displayed with a variety of Confederate weapons, including an ID’d presentation Confederate officer’s Colt Navy. While Civil War service is debatable at best, what is quite obvious is that these revolving long arms are extremely scarce. The mere fact that a collector and dealer like Norm Flayderman has never owned (or apparently seen) one of these rifles speaks volumes about its rarity. It is unlikely that even the most advanced collector of early repeating firearms has one of these in their collection. In fact even the Henry Stewart Jr collection at VMI (one of the finest and most complete collections of early and one of a kind repeating firearms) does not have a Tranter revolving rifle in it. Clearly this is a gun that would be the centerpiece of practically any mid-19th century arms collection. After extensive research to try to determine the value of such a rare piece, I located a single auction sale of a Tranter revolving rifle in 2008 in Australia. This gun was a center fire conversion of the original percussion rifle and sold for in excess of $9,200 US including the buyer’s premium. With that altered rifle as the only comparable sale with which to help determine the value of this scarce revolving rifle, I feel that I have priced this gun extremely fairly. I am quite confident when I say that I doubt there is another one of these guns currently for sale, nor is another likely to be offered any time soon. Do not miss you chance to add a truly wonderful and rare Tranter revolving rifle to your antique firearms collection.