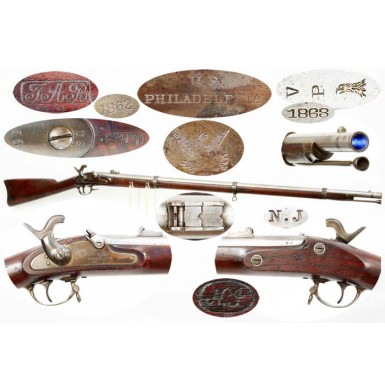 This “Philadelphia” US M-1861 Rifle Musket is in about VERY FINE overall condition. This gun appears to be one of the New Jersey “Trenton” guns assembled by Addison Burt that utilized a surplus Philadelphia lock. The gun is very crisp and sharp throughout with a smooth barrel that is mostly bright and retains a slightly dulled original “arsenal bright” finish that may have been lightly cleaned at some point in time. The metal is free of any significant pitting, although it does show some lightly scattered pinpricking, mostly around the breech and bolster area. There is also some lightly oxidized age freckling scattered on the metal parts. The furniture of the musket (buttplate, barrel bands, and nose cap) all have a dull smoky gray patina with bluish undertone. The lock of the musket is clearly marked with a (Spread Winged Eagle) and U.S. / PHILADELPHIA forward of the hammer, and with the date 1862 horizontally to the rear. The lock shows about 85%+ of its original case hardened coloring, which has faded and dulled somewhat, but is still very attractive. Most collectors do not know that all US M-1861 locks were initially case hardened, which resulted in the mottled color associated with that process, but not quite as vibrant as the colors associated with Colt’s finishes. After the locks were casehardened, they were polished to bright on their exteriors to match the balance of the musket. This lock retains the original case hardened finish, and was never polished to bright, suggesting it was one of the left over Philadelphia marked locks that was utilized in muskets by other makers, like those assembled by Addison Burt. Top flat of the breech of the 40” long barrel is marked with the date 1863. The left angled breech flat is marked with the expected V P (Eagle Head) proof marks, and the Eagle Head is of the style associated with “Trenton” muskets. The left breech flat is also stamped N.J< showing New Jersey ownership, and a matching New Jersey script N.J cartouche is present on the stock flat opposite the lock. The 1863 dated Trenton barrel, in association with the 1862 dated Philadelphia marked lock all suggest an Addison Burt “Trenton” assembled gun using a Rice lock from his forfeited contract, which was subsequently sold to the state of New Jersey. The stock is also marked with two clear US sub inspection cartouches in unlikely places. One is located on the top of the wrist, behind the breech plug tang and the other is on top of the comb in front of the buttplate tang. Some US Civil War era martial carbines and breechloading rifles are encountered with inspection cartouches in this second location. Both cartouches are the script letters TAB for Theodore A. Belknap a US Ordnance Department armory sub inspector who worked circa 1862-1863. Belknap’s tiny block initials are also stamped in the wood forward of the buttplate tang in a location and style more typical of carbines than muskets. The tang of the buttplate is stamped U S forward of the screw and also with the rack number 58 to the rear of the screw. This is probably a State of New Jersey rack number. All of the flat, spring retained barrel bands are all marked with the usual U on their right sides. The lock of the musket is mechanically excellent and functions perfectly on all positions. The original and correct post-July of 1861 US M-1861 pattern rear sight is in place on the top of the breech, forward of the nocksform. The sight is 100% complete, correct and fully functional. The original cone (nipple) is in place in the bolster and is very crisp, retaining about 60%+ of its original blued finish, although it shows some fading and dulling. Both original sling swivels are in place on the musket, and are fully functional. The original swelled shank, tulip head ramrod is in place under the barrel, and is full length with excellent threads on the end. The bore of the .58 caliber musket rates about VERY FINE. It is almost entirely bright, with only a couple of lightly scattered patches of darkness and minor oxidation present. The rifling remains excellent and crisp, and the bore shows only some very lightly scattered areas of very light pitting along its length. The stock rates about VERY FINE as well, and is very crisp and sharp, with no indications of having been sanded. The stock is made from a particularly attractive piece of highly figured walnut and really a piece of furniture grade wood. The stock retains fine lines and edges, but shows scattered bumps, dings and bruises from storage, handling and use over 150 years. The stock is solid and full length with no breaks, cracks or repairs noted. The stock does show a few minor slivers and tiny pieces of wood missing from the sharp edges of the ramrod channel, mostly around the the area of the upper barrel band. This is typical of muzzle loading muskets, whose stock often show wear form the repeated removal and return of the ramrod to its storage channel.

Overall this is a really nice, high condition example of a rather scarce Philadelphia M-1861 Contract Rifle Musket. Like most of these scarce guns, it was probably not a real John Rice assembled gun, but appears to be a Trenton contract gun sold to New Jersey with a surplus Rice lock in it. This is absolutely correct for both the gun and the lock and I am sure that this gun has been assembled in this configuration since the period of use and is not a later “collector assembled” parts gun. One fact is certain, this is rather difficult musket variation to find, as at most about 1,500 “Philadelphia” marked lock plates were manufactured, with the actual number being more likely in the 500-1,000 range. The gun remains extremely crisp throughout and is 100% complete and appears to be period correct in every way. This would also be a nice addition to any collection of Civil War rifle muskets and is a very fine condition gun that displays wonderfully.