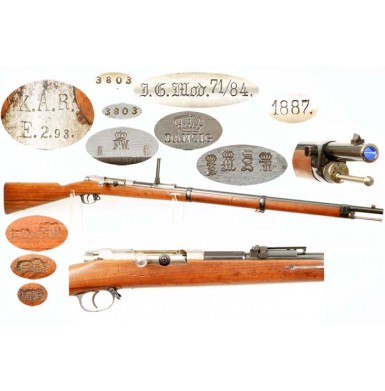 This is an EXCELLENT example of the Deutsches Infanteriegewehr 71.84, better known as the German M1871/84 rifle. The rifle was a Mauser design and was the first magazine fed, repeating, bolt action rifle adopted by the German states. The M1871/84 was in improvement over the earlier M1871 Mauser rifle, as that gun was a single shot rifle. The M1871/84 utilized a tubular magazine in the forend, similar in design to that found on Swiss Vetterli rifles of the era. While the Swiss rifle incorporated a side mounted loading gate on the frame, much like a Winchester, the German magazine was loaded through the breech. The M1871/84 rifle retained the Mauser bolt and safety design of the earlier M1871, and added a magazine cut-off which allowed the rifle to be used as a single shot gun, leaving the ammunition in the magazine for use when rapid fire was essential. The rifled weighed in at about 10 pounds, and the tubular magazine had an 8 round capacity. The rifle was 50 ““ in overall length, with a 30 ““ barrel. It was chambered for the centerfire 11x60R cartridge, which used a round nosed bullet and black powder as the propellant. The rifles were produced at various German state arsenals, including Prussia’s Spandau, Danzig and Erfurt armories, and Bavaria’s Amberg armory. Waffenfabrik Mauser produced the guns manufactured for the state of Württemberg. The rifle was manufactured from 1884 through 1888 and was then replaced by the M1888 Commission Rifle. During its relatively short manufacturing lifespan, about 1 million M1871/84 rifles were produced. Although the rifle was rendered obsolete rather quickly by smokeless powder cartridges, it saw a significant post-production service career with the Landwehr (active reserve infantry) and the Landsturm (local reserve militia). With the coming of World War I, the M1871/84 again saw service with these lower priority reserve units, to free more modern weapons for use on the Western Front. In fact this example is unit marked on the buttplate for Great War service. It is marked K. A. R. /E. 2. 93 on the tang. This is one of the more difficult unit marks to translate. The “K.A.” can either indicate Kraftfahrabteilung (motor transport) or Küstenartillerie (costal artillery) with the “R” indicating reserve. The second line indicates Company “E”, 2nd Battalion, Waffe Nr. (gun number) 93.

The Infanteriegewehr M1871/84 offered here is in about EXCELLENT condition. The rifle retains about 93%+ of its original brilliant blued finish on the barrel, with only some very minor fading and some small patches of lightly oxidized freckling mixed with the blue. The minor finish loss is simply along high edges and contact points, and at the muzzle where a bayonet was affixed numerous times, causing the blue to thin slightly. The barrel bands retain about 93%+ of their bright blue, and some light storage wear, and some lightly oxidized freckling as well. The triggerguard retains a similar amount of blued finish, with the most obvious areas of scattered, light surface freckling. The buttplate and receiver retain their original “in the white”, arsenal bright finish. They have both started to develop a thin brown patina and the buttplate shows scattered patches of minor oxidation and surface freckling. The rifle was produced at the Prussian national arms manufactory in Danzig, known simply as the Danzig Arsenal at the time. Danzig was the German name for the Polish city of GdaDsk. The city changed hands (and “nationalities”) on a regular basis for most of its history. While established as Polish city during the 980s, the city was again part of Poland from 1454-1793, and after that was not restored to Polish rule until the conclusion of World War II. During it’s history it was under “German” control for most of its existence, being ruled by the Teutonic Knights from 1308-1454, the Kingdom of Prussia from 1793-1806, and again from 1815-1919. Danzig was made a “free city” after the conclusion of World War I, but was invaded by the Nazi and brought under German control until 1945, with the city returning to Polish rule that year. The arsenal in GdaDsk (Danzig) dates to the early 1600s and is a classic example Mannerist architecture and remains a popular tourist attraction today, even though it is a reconstruction of the original arsenal, which was destroyed during World War II. The receiver is clearly marked with the (PRUSSIAN CROWN) / DANZIG on the top of the receiver. The left flat below the Danzig mark is stamped with the royal cypher of Frederick Wilhelm IV (even though the ruler at that time was Frederick’s brother William I), which is a (CROWN) / F.W.. A pair of inspection marks flanks the cypher, a (CROWN / R and a (CROWN) / D. The right upper receiver flat is marked with four inspection marks, of a (CROWN) over the Gothic letters which appear to be F, M, S and K. The rifle is serial number 3803 and is all matching, with all parts bearing either the complete serial number or at least the last two digits, 03. The right side of the receiver is marked in Gothic script: I. G. Mod 71/84 for Infanteriegewehr 71/84. The right side of the breech is clearly marked with the year of production, which was 1887, the next to last year these rifles were produced. All of the markings on the metal remain extremely crisp and sharp and are in fantastic condition. The action of the rifle works perfectly, with the bolt opening and closing smoothly and the famous Mauser safety and the magazine cut-off switches working exactly as they should. The bore of the rifle is in about EXCELLENT condition. It remains extremely bright, with very crisp rifling. The bore shows only some very lightly scattered pinpricking in the grooves and has a somewhat frosted appearance along its entire length. A good scrubbing might improve the bore to about mint, but it is certainly in crisp enough condition for the rifle to shoot very well as it. The rifle retains its original sling swivels, rear sight and magazine tube cap, complete with stacking pin. As previously mentioned, all of the parts of the rifle are matching. The stock rates about EXCELLENT as well. The wood of the stock is extremely crisp and sharp with excellent markings. The stock shows numerous Prussian inspection and ownership marks both on the obverse butt and along the toe behind the triggerguard. All of these marks are deeply stamped and remain very crisp. The stock is full length and free of any breaks, cracks or repairs. There are some minor light handling and storage bumps and dings, but there are no detractions at all to the stock. For a gun that saw service with a Bavarian Reserve Infantry regiment during the Great War, the stock is in truly wonderful condition.

Overall this is a really outstanding example of a unified Germany’s first repeating military rifle. The gun is simply in great condition and is extremely attractive. With the very crisp bore, it would no doubt shoot wonderfully, and reloading for the rifle would certainly be a fun project. For any collector of early bolt-action military rifles, the Infanteriegewehr 71/84 is a must have, and this one is in a state of preservation that would be very difficult to improve upon without spending a lot more money. While the Prussian guns from Spandau tend to be found in wonderful condition from time to time, Danzig made rifles are not often encountered and almost never in this high state of preservation. The fact that the gun bears unit markings to the First World War only makes the gun more desirable and an even better addition to any serious German military rifle collection.