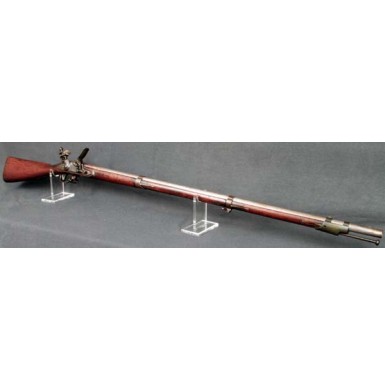 This is a really lovely example of an early production US M-1816 Flintlock Musket, or as collectors tend to refer to them US M-1816 Type I. Technically only this pattern of musket should be referred to as an “1816”, with all of the subsequent collector types really being modifications of the 1816 that received new model designations form the Ordnance Department. The “M-1816 Type 2” is really the M-1822 and the “M-1816 Type III” is really the M-1822/28. This musket was produced by the Philadelphia gun manufacturing firm of Marine T Wickham. Wickham had previously been employed by the Ordnance Department as an arms inspector at the Philadelphia Schuylkill Arsenal. According to author & researcher Peter Schmidt in his US Flintlock Muskets & Their Bayonets: The Later Years 1816 through The Civil War, Wickham subsequently went into business for himself by taking over an 1815 contract for 12,000 “Standard Model of 1815 Muskets’ that had been awarded to Philadelphia gun makers William and John Joseph Henry. Apparently the Henry’s never delivered any muskets under the contract, and Wickham took it over on May 10, 1817. The muskets that Wickham produced under this contract were undated, and it appears that they all inspected by George Flagel. Flagel was an arms inspector who worked out of the Schuylkill Arsenal, and had taken over Wickham’s old job. It is likely that these arms were then dispersed to other area arsenals, like the Frankford Arsenal (also in Philadelphia area), then subsequently to various state arsenals under the Militia Act of 1808. These early M-1816 Muskets were distinguished from the later M-1822 & M-1822/28 by the mounting of the rear sling swivel on a separate stud forward of the triggerguard. The earlier muskets were also less consistent from gun to gun in terms of the size of the component parts, making the guns completely individual and incapable of interchanging parts “ even bayonets! The musket is one of the guns issued to the State of New Jersey under the Militia Act of 1808, and is surcharged S.N.J> (State of New Jersey) on the top of the barrel, near the breech. Another SNJ mark is present on the stock flat, opposite the lock. The musket is additionally marked in the toe of the stock and under the belly near the triggerguard with a two part gang stamp that reads ESSEX BRIGADE. The Essex Brigade was formed in 1775 and formally organized as the 1st New Jersey regiment in the Continental Army. It was comprised of New Jersey militia companies from Essex County. After the American Revolution the regiment was reorganized as New Jersey militia, and returned to using the Essex Brigade designation for those local militia units that mustered together. Some elements of the brigade served during the War of 1812 and were mustered into Federal service. During the early 1850’s member militia groups from Newark and Elizabeth were withdrawn from the Essex Brigade and formed their own “Independent Essex Brigade”. The militiaman who was issued (or owned) this musket also stamped his name into the bell of the gun, forward of the triggerguard. He stamped it three times and it reads F. R. SMITH. Federal Era records are not readily available for on-line research, so it may take a trip to the New Jersey archives to track down exactly who Mr. Smith was and what he may have done while in the service of the Essex Brigade. It was not uncommon for local militia groups in New Jersey to adopted brigade names based upon their county of origin, and similar Wickham M-1816 muskets are known with the name BERGEN BRIGADE stamped in the toe of the stock in the exact same manner as this gun.

This US M-1816 Flintlock Musket is in about FINE+ overall condition. The gun is 100% complete and correct and in original flint configuration. The lock is marked with the early Wickham contract markings: M.T. WICKHAM in an arc, forward of the hammer, over PHILA. The upper right side of the breech is marked with George Flagel’s inspectors F, a depressed P firing proof and with a US. The stock flat opposite the lock is marked with Flagel’s inspection cartouche, a V / G F and with the SNJ stamp. The flintlock battery functions perfectly, and will still spark the frizzen and open it as it should. The top jaw screw bars a V inspection mark and an original French Amber flint is held in the jaws, still wrapped in an old leather pad that shows wear and burnt edges from use. The lock plate has a smoky plum brown patina, which is slightly mottled from the heat generated by the flint ignition system. The brass flash pan it totally untouched and shows a layer of crusty power residue, mixed with old verdigris and has a rich dark color to it. The touchhole is completely unmolested and shows good erosion. It is slightly oversized, but that is not uncommon on early muskets and is placed slightly forward of center in the pan, at exactly the right height. The interior of the lock is likewise completely untouched and the fit of the all of the parts is precise and correct. The musket retains both sling swivels as well as its original button ramrod. The rod is full length and retains good threads at the end for the use of wipers and ball pullers. The musket has a medium pewter gray patina over most of the iron barrel, with some darker age staining and some minor peppering and pinpricking. The metal is mostly smooth, with some minor roughness around the breech and touchhole area and appears to have been lightly cleaned at some point long ago “ primarily to make the marks more legible. The majority of the iron furniture has a darker brown patina over an even gray base color. The buttplate had a dark and somewhat crusty brown appearance, while the balance of the furniture is a smooth chocolate color. The upper band has more of a smoky blue gay patina, similar to the color of the heads of the lock mounting screws and the hammer, top jaw and top jaw screw. The musket is very well made, with fine wood to metal and metal-to-metal fit throughout. The stock rates about FINE overall and should probably be rated better than that when you realize the musket is approaching 200 years old! The stock is full length and solid, with no breaks or repairs. It has a gorgeous, deep, dark reddish brown tone to it that is very attractive. The usual bumps and dings from nearly 200 years of handling and use are preset over the entire stock, but there is no sign of abuse or serious damage. The stock retains very good edges for a musket of this age and does not appear to have been sanded at any time. Any rounding to sharp edges appears to be from normal wear, and the overall appearance of the stock is crisp and sharp.

Overall this is a really fine example of an early production US M-1816 Musket by a famous American contractor who had previously worked for the Ordnance Department. The musket is very well marked, by the maker, the US inspectors, the State of the New Jersey, the Essex Brigade and even by the man that carried it! It is not often that a musket of this age surfaces in such fine condition with so many wonderful marks that tell us so much about the gun. If you have been waiting to add an early production US M-1816 to your collection and have wanted an unmolested gun in original flint, it would be difficult to find a nicer one without spending a lot more money. The gun has a fabulous look, is completely righteous and is marked to the famous Essex Brigade of New Jersey. It’s hard to ask of more in an early American marital flintlock musket, and this is a gun that you will be proud to own for years to come.