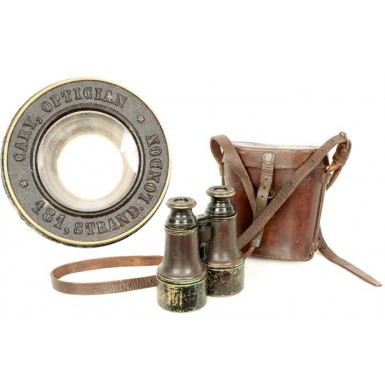 When most students of the American Civil War think about the material assistance provide to the Confederacy by Great Britain, the first thing that comes to mind is the Enfield rifle musket, and all of the associated small arms that were purchased from England by the South. However, the breadth and variety of items that were acquired by southern Confederacy from England is truly staggering. In addition to small arms, ammunition and artillery, the Confederacy purchased thousands of yards of cloth for uniforms, complete uniforms, blankets, buttons, thread, accouterments & field gear, mess kits, medical supplies, machinery, and almost every possible item that you can think of that might be of use to a 19th century army, navy or the government that supported them. One item that frequently appears on the manifests of Confederate blockade-runners is “Scientific Instruments”. While it is well known that Confederate manufacturing capabilities were significantly smaller and less sophisticated than those in the north, they were all but non-existent when it came to complicated mechanical measuring devices, clocks, compasses, sextants and optics. An invoice within the McRae Papers dated April 4, 1863, from Imray, Son & Company of London, Adjusters of Compasses in Iron Ships, Steamers & C and Manufacturers of Nautical & Optical Instruments and CHART and BOOKSELLERS, indicates some of the breadth of the “scientific instruments’ that the south acquired from England. The invoice includes the following items, which is only a partial listing:

These items were delivered to the blockade runner Eugenie, with some of the items not doubt being for the use of the vessel and some probably for delivery to the Confederate War Department. Even northern makers often relied upon England and France for the lenses that were needed for double glasses (binoculars), twin telescopes (another variant of binoculars), and regular telescopes, so for the most part the optics used by both sides in the field and at sea originated in England or France. As instruments and optics were typically not marked or inspected in any way so as to identify them as “Confederate” or “Union”, we must rely upon known makers and retailers whose names appear in period documents, and the provenance of similar items in institutional collections, in order to make any statements about who provide what to whom during the war. One example of an identified set of Confederate binoculars resides in the collection of the Museum of the Confederacy. This set is identified to Major General Samuel Jones, and was donated to the museum in 1918 by his daughter. Jones was a Virginia native, born on his parents plantation Woodfield in Powhatan County in 1819. He graduated from the US Military Academy at West Point in 1841 and served in the US army until the beginning of the American Civil War. Unlike many of his Confederate contemporaries, Jones did not fight during the War with Mexico, but was a professor at West Point during that time. Jones reached the rank of captain in the US Army prior to the Civil War. After Virginia seceded from the Union, Jones resigned from the US Army and joined the Virginia state forces, which were soon rolled into the Confederate Army. Jones was promoted repeatedly between the time he joined the Confederate forces and March of 1862, when he reached his highest rank of Major General. Jones commanded the Department of Western Virginia (headquartered at Dublin, VA) from December of 1862 through March of 1864, and was subsequently transferred to command the district of South Carolina until January of 1865. In February of 1865 Jones was transferred to command of the Department of Florida and South Georgia, and he surrendered in that capacity on May 10, 1865 in Tallahassee. The Jones binoculars themselves are unmarked, but the case has a paper label with gold lettering that reads CARY / OPTICIAN / 181 STRAND / LONDON. The Cary name was an important part of English optical history, as the family was in the business for over 100 years in a variety of related firms whose names regularly changed as partners came and went. One of the most successful early microscopes bears the Cary name, the Cary (sometimes called the Cary-Gould) “Box Microscope” was an early successful portable microscope that became popular in the mid-1820s, and which is attributed the founder of the company William Cary. William died in 1825 and his son John “carried” on the family name and business until his death in 1859. Partners Charles and Henry Gould worked with both Carys, with Charles passing in 1849 and Henry in 1856. Charlotte Hyde Gould (wife of Henry) remained with the business though her passing in 1865, and partner Henry Porter maintained the business through 1902. During most of that period it appears that the company primarily traded upon the fame of the Cary name and that most of the products carried that name, if marked. A January 1870 advertisement in the British magazine Nature lists the firm as Gould & Porter (Late Cary) at 181 Strand, and notes that the opticians had been Established upwards of a century.. As we know that the last Cary with the firm died in 1859, and the last Gould passed on in 1865, it seems reasonable that the “Cary” mark with the 181 Strand address, on binoculars which were not common before the mid-1850s, would suggest 1855-1865 production.

Offered here is a lovely set of Cary marked Double Glasses in about FINE condition. These binoculars are the set photographed and described on page 505 of the newly released book THE ENGLISH CONNECTION Arms, Material and Support Furnished to the Confederate Stated of America by Great Britain. The book is an exhaustive, 600+ page reference regarding all of the items purchased by the Confederacy from England. This set of binoculars is clearly marked in a circular manner, on the rear face of the gutta-percha eye pieces, CARY, OPTICIAN * 181, STRAND LONDON . The binoculars are contained in what appears to be their original leather case, which fits them perfectly. The binoculars are approximately 5” long and 5” wide fully collapsed, with 1 3/8” extendable sunshades and about 1” of focal length adjustment, allowing for a fully extended overall length of about 7 “. The binoculars have 1 3/8” eyepieces with 11/16” ocular openings and 2 1/8” exit openings. The binoculars provide the relatively weak magnification typical of the period of about 2x-3x. The binoculars are brass with a black enameled finish and fine grade pepped leather covering the main body. The enamel has worn and chipped, mostly on the eyepieces and sunshades, both of which retain about 60%+ of their original finish. The high edges of the eyepieces and the sunshades also show a mottled pattern of green verdigris that has developed over the years, resulting from the chemical reaction between the brass and the leather case. This coloration is quite attractive. The leather covering on the tubes remains in tact and is fully stitched on one, with the seam splitting on the other and only connected by a few strands of thread. The binoculars retain clear, crisp optics and can be easily adjusted for focus, even for my eyes. The binoculars functions smoothly and correctly and other than requiring a light cleaning of the lenses, would be completely serviceable today. The case is of high quality leather, dyed brown, with dark blue velvet lining inside the top of the lid and on the bottom of the case. The slightly ovoid case measures approximately 6” tall by 5 ““ wide and is in VERY FINE condition. The leather retains much of its original finish with only some light surface scuffing. The original stitching remains in place throughout and is tight and secure. The original closure tab is still attached to the lid, and secures the case via a simple D shaped iron buckle. The original adjustable shoulder strap is in place on the case as well. It too uses a simple D-shaped iron buckle for adjustment. Both the closure tab and the strap show significant finish crazing, but remain in both solid and pliable condition.

Overall this is a very nice set of mid-19th century, Civil War era Double Glasses in very nice condition, complete with their original case. The optics of the glasses remain clear and they are marked by one of the more famous of the English optical companies from the 19th century. Cary was a known supplier of optics to the Confederacy as the set of binoculars in the Museum of the Confederacy attests. This would be a very nice addition to any collection of period optics, to the display of equipment for a Civil War officer (southern or northern) or to a collection that focuses on blockade running, as the glasses would represent both and item used on the blockade runner and transported by it. The fact that this set of glasses is published and well documented only enhances their value and their potential to appreciate in value with time.