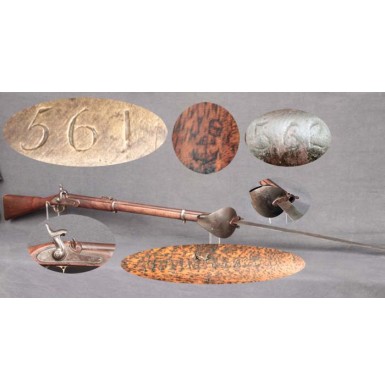 During the early days of the American Civil War, the Confederacy exerted Herculean effort to obtain high quality weapons for its military. Confederate purchasing agents in England concentrated on obtaining all available “Enfield” pattern arms that could be purchased. While the purchases concentrated on P-1853 Enfield rifle muskets for the infantry, a number of short rifles and carbines were obtained as well. Confederate documents reveal that these early orders included 30,000 P-1853 “Long Enfields’ (obtained from Sinclair, Hamilton & Company), as well as approximately 10,000 “short rifles’ of varying patterns. These guns are the ones that appear with the J S / (ANCHOR) viewer’s mark and Confederate inventory number markings. The “Long Enfields’ were serialized in three series, from 1-9999, 1-9999 A and 1-9999 B. The short rifles were simply serialized 1-9999, without series letters. The short rifles were a mixture of standard P-1856 and P-1856 Type II (Bar on Band) iron mounted rifles, as well as non-standard brass mounted P-1856 and P-1856 Type II rifles and a handful of the brass mounted P-1858 Naval Rifles. The Pattern 1858 Naval Rifle was in many respects similar to the standard P-1856 rifle, but with a few minor cosmetic differences and one major performance difference. The P-1858 was a brass mounted rifle, instead of iron mounted, and had the rear sling swivel attached to the front bow of the triggerguard instead of being screwed into the toe of the stock. The P-1858 retained the 1,100-yard rear sight and 33” barrel of the P-1856 rifles, but the barrel was much heavier and was rifled with 5 grooves instead of 3. The heavier barrel and improved rifling pattern made the P-1858 rifles more accurate than the P-1856. The heavier barrel also dissipated heat more effectively, resulting in less change to the point of aim / point of impact after repeated firings. As previously noted, the P-1858 Naval Rifle was designed to accept a cutlass bayonet instead of the standard saber bayonet. Orders by Caleb Huse for the Pattern 1858 Naval Rifle appear to be limited to about 700 guns, and these can be pinned down to two specific orders: one for 200 on June 11, 1861 and one for 500 on June 27, 1861. Huse’s order to Sinclair, Hamilton & Co specified “Sea Service Rifles, New Pattern, same bayonet as short rifles.“. This clearly indicates that Huse did not want to purchase the cutlass bayonets that the Naval Rifle was intended to accept. However, in late July or early August 1861, Commander James Bulloch (the overseas purchasing agent for the Confederate Navy) placed an additional order for 1,000 Naval Rifles, complete with the cutlass bayonets. Bulloch noted this purchase in a letter to the Confederate Secretary of the Navy S. R. Mallory, dated August 13, 1861. In Bulloch’s post-war memoir The Secret Service of the Confederate States in Europe he noted: “1,000 Short Rifles with Cutlass Bayonets and 1,000 rounds of ammunition per rifle were shipped aboard FINGAL that arrived 14 November, 1861 (Volume 1, p 112). The cargo of the FINGAL was delivered to the port of Savannah, GA. Today there are only 34 of the engraved, Confederate numbered cutlass bayonets known to exist, with the highest number known being 999. Of the Confederate numbered naval purchased Naval Rifles, only 19 are known to have survived.

This Confederate purchased P-1858 Naval Rifle & P-1859 Type II Cutlass Bayonet are a wonderful and rare combination to find available for sale. The gun is in about VERY GOOD+ to NEAR FINE condition. As previously noted, the gun bears the expected the J S / (ANCHOR) viewer’s mark and has the Confederate inventory number 561 engraved in the buttplate tang. The ramrod is also engraved with the matching inventory number 561. Today there are very few numbered Confederate guns that retain their original engraved number ramrods, and finding one is a very difficult task. Numbered rammers, when found for sale, often bring $1,000 on the open market, and increase the value of a gun by at least that much when they are encountered together. The toe of the stock is marked by the contractor that delivered the gun, in this case TIPPING & LAWDEN. Tipping & Lawden were listed as Gun & Pistol Makers, located at 40 Constitution Hill in Birmingham from 1837-1852, when they added space at 41 Constitution Hill. In 1860 they added additional space at 18 Buckingham Street, and remained in business until 1877. Tipping & Lawden manufactured Sharp’s pattern pepperboxes under license from Sharps during the mid-1800’s. They also produced Harding patent percussion revolvers for Deane & Son. In 1877 Tipping & Lawden was purchased by P Webley & Sons of Birmingham.

Overall this is simply a fantastic example of a scarce Confederate Naval contract P-1858 Naval Rifle complete with the cutlass bayonet. Rarely are CS numbered Enfields found for sale with matching ramrods, and obtaining a rifle with a bayonet that is only 1 number off from the gun is all but unheard of. This would be the perfect centerpiece for any Confederate Naval collection or any collection of Confederate imported Enfield arms. Other than the missing swivels, the gun and bayonet are 100% complete, correct and original. It is very unlikely that a package like this will be available for sale again anytime soon, and I am 100% confident that you will be absolutely thrilled when you display this rifle and bayonet.