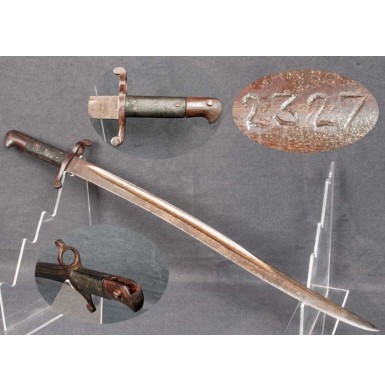 This is a really lovely, totally untouched example of a Confederate Imported British Pattern 1858 Bar On Band Saber Bayonet. The bayonet has an engraved Confederate inventory number on the reverse pommel cap, which reads 2327. These numbered saber bayonets were imported by the Confederacy for use with the English Pattern 1858 Bar On Band Short Rifle (sometimes referred to as the P-1856 Type II rifle), which is one of the less often encountered of the English long arms to be purchased by the Confederacy. The numbered bayonets and rifles were part of any early Confederate contract for 30,000 “Long Enfields” (rifle musket) and 10,000 “Short Enfield" rifles. These were the guns that were marked with the enigmatic JS / (ANCHOR) viewers mark, and were also marked with an engraved inventory number in the buttplate tang if they were brass mounted weapons, and a stamped inventory number in the wood behind the triggerguard in the case of iron mounted rifles. The rifle contract include all patterns of Enfield “short rifles’ in production at that time, including both iron and brass mounted P-1856 rifles, brass mounted P-1858 Naval Rifles, a handful of P-1860 iron mounted rifles, and some P-1858 (P-1856 Type II) “Bar On Band” rifles, in both iron and brass mountings. This bayonet would have been imported with the P-1858 rifle with the matching inventory number. The process of marking the weapons with inventory (really accounting) numbers came to an end by the spring of 1862. As a result, we can be relatively sure that this bayonet was imported between by early to mid 1862 and was more than likely in the Confederacy prior to the battle of Shiloh in the West and the Peninsula Campaign in the East. In a collected database of Confederate numbered rifles, with over 20 years of data, only a handful of “Bar On Band” rifle numbers have been collected. To my knowledge, less than 5 CS marked and numbered iron mounted “Bar On Band” rifles are known, and they are all relatively low numbers. Approximately 10 brass mounted “Bar On Band” rifles are known, and many are in a fairly close group from about 2300-2400. The most famous of those brass-mounted rifles is the one that was carried by Sergeant Richard Kirkland of the 2nd South Carolina Infantry Regiment. Kirkland would be immortalized as the “Angel of Marye’s Heights’ during the battle of Fredericksburg. Kirkland’s brass mounted Bar On Band rifle #2370 survives today in the collection of the South Carolina Relic Room in Columbia, SC. It appears that a group of 50-60 brass mounted P-1858 rifles may have been issued to the 2nd SC. Four surviving rifles, with numbers ranging from 2321 to Kirkland’s 2370 suggest a pattern. As this saber bayonet falls within that range, we can determine that the bayonet was almost certainly mated to a brass mounted P-1858 rifle, and quite probably issued to the 2nd SC.

The bayonet is in untouched, “attic” condition and has a deep dark blue-black patina. There are some small, scattered patches of light surface oxidation and pinprick pitting scattered along the blade and hilt, and some deeper pitting around the ricasso. The blade of the bayonet is unmarked, but it is likely of Solingen origin. All extant Confederate numbered P-1859 cutlass bayonets and many of the Confederate P-1856 and P-1856 “Bar on Band” bayonets have Solingen makers marks on the blades. It was not uncommon for the Birmingham and London gun trades to rely heavily on the German blade makers to provide bayonets when they were filling large orders. The blade is full length, and is free of any chips or breaks. The spring loaded bayonet locking latch is in place on the obverse pommel cap, and is fully functional. The pressed leather grip panels are in about VERY GOOD condition and retain the much of their original finish and the majority of their pressed checkered pattern. The grips do show use and wear commensurate with the age and condition of the bayonet. The grips do exhibit some minor shrinkage and some finish loss due to flaking. The overall condition of the grips is actually better than many that are encountered for sale today.

Overall this is a very decent, totally unmolested example of a scarce Confederate Numbered P-1858 Bar on Band Saber Bayonet. Only 10,000 numbered saber bayonets of all patterns were imported by the Confederacy, and their survival rate is quite low. In fact, based upon the best currently available research and a data base of Confederate import numbered items that has been collected over 20 years, only 35 of these numbered saber bayonets survive today. That means that only 1 out of every 285 bayonets has survived to today! If you have a numbered Confederate P-1858 rifle (especially a brass mounted one), this is the ultimate accessory to go with it and will be a fantastic addition to your rifle or to any Confederate collection. I cannot overstate the rarity of these Confederate numbered bayonets, and it this is an item that you will be very glad that you added to your collection of Confederate arms.