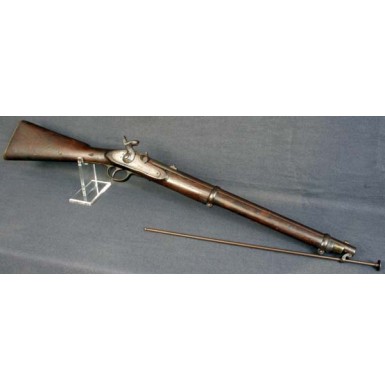 This is a wonderful, attic condition and field used example of the scarce Pattern 1856 “Enfield” Cavalry Carbine as imported by the Confederacy during the American Civil War. The Confederate provenance is undeniable, as a clear and completely authentic J S / (ANCHOR) mark is visible on the comb of the stock, just forward of the brass buttplate tang. While scholars continue to argue about the identity of “J S”, and exactly whom the initials refer to, their Confederate association is undeniable, and they appear only on Confederate purchased arms of English origin. The P-1856 Cavalry Carbine is a rarely encountered Civil War era long arm, and even those carbines without Confederate import marks bring significant prices. While the US Government only purchased about 250 of the carbines, the Confederacy (by most researchers accounts) purchased between 8,000 and 10,000 of the guns. While this seems like a significant number, it is quite low when compared to the fact that most researchers put the total of “Enfield” pattern English arms imported by the Confederacy at somewhere between 300,000 and 500,000. Even by the most lenient standards, that puts the importation of P-1856 carbines at well under 5% of all Enfield pattern arms obtained by the Confederacy. Their absolute paucity on the collectors market underscores that fact that these guns saw hard use during the war and were clearly used up in the field. Extant examples of Confederate marked P-1856 carbines tend to appear in two conditions: heavily used & very worn, or nearly mint guns from captured Confederate Blockade Runners. In either case, the guns are very scarce and are rarely found available for sale.

This J S / (ANCHOR) Confederate import marked Pattern 1856 Cavalry Carbine was manufactured by the famous London unmaking firm of J.E. Barnett & Sons. The Barnett’s were a family that traced their arms making heritage to Thomas Barnett who established the family business in London in 1796. During the Civil War era, Barnett was located Brewhouse Lane, Wapping (1860-1874). The gun is clearly marked in two horizontal lines on the lock, forward of the hammer, BARNETT / LONDON. The inside of the lock is also stamped BARNETT above the mainspring and is also marked with the initials C R and the Arabic number 16, both near the boss that secures the upper portion of the mainspring. The barrel is marked with standard London commercial proofs at the breech, as well as the gauge mark 25, indicating .577 caliber. The underside of the barrel is marked BARNETT and also has the initials C R, and a variety of Arabic numbers, including 13, 0 and a 6 (or possibly a 9. The bottom of the barrel bears the file slash assembly mark: \ \/ | and this same mark is found in the ramrod channel, on the neck of the breech pin (tang screw) and on one of the two side nails (lock mounting screws). The upper barrel band bears the maker mark W & S for Phillip Webley & Son. The stock flat opposite the lock is marked just below the sling bar: C. ROSE, possibly providing a clue as to the initials C R that appear in the lock and under the barrel. No “C Rose” was found in any of my references on either the London or Birmingham gun trades, so I believe it is the mark of a “setter up” (assembler) who worked for Barnett and assembled the carbine from its primary components and did all of the final fitting of the gun.

The carbine is in about VERY GOOD condition for an early import Confederate cavalry carbine that clearly saw extensive use during the war. The gun more than likely arrived in the South prior to the end of 1862, and likely saw significant service over the next 2 “ years. The lock remains tight and crisp still functions well on all positions. The original swivel rammer is in place under the barrel and still functions correctly as well. This is not common, as these somewhat delicate and very cumbersome rammers were often “lost” in the field during use, although it is difficult to know if the losses were accidental or intentional. We do know that Confederate Cavalry commander JEB Stuart specifically requested the P-1853 Artillery carbine for his troops, since it did not have a swivel rammer. The original sling bar and ring remain in place on the stock flat of the carbine, but the rear most side nail (lock mounting screw) appears to be a period replacement. The original screw protector “doughnuts’ are present on the barrel band tension screws “ parts that are almost always missing from Civil War period Enfield pattern arms. The original rear site base is in tact on the barrel, but the two flip up leaves are lost to the ages. The gun shows significant service and wear, and the majority of the metal has a thick, brown patina. The bottom of the barrel still shows some nice original blue, in the area protected by the stock. The breech area shows significant pitting and wear from the caustic fulminate of mercury cap flash, and the wood behind the bolster shows some burn out that is commensurate with the amount of pitting at the breech. Clearly this carbine was fired a lot. The balance of the iron components of the carbine mostly show a smooth brown age patina, with only some scattered light to moderate peppering and pinpricking. The brass furniture has a really lovely, untouched dark mustard patina. The small stud, forward of the triggerguard, that held the snap cap ring and chain (cone protector) is long gone, as is the snap cap. The bore of the carbine is very dark and dirty, showing significant use and moderate pitting its entire length. There is faint 3-groove rifling present in the bore, but a good scrubbing with a brass brush might really improve its overall condition. The stock is in about VERY GOOD+ to NEAR FINE condition, especially for a Confederate used saddle weapon. The stock shows numerous bumps, dings, rubs, impact marks and minor chips “ all associated with the hard life of a Confederate cavalry carbine. There is some wood loss from "burn out" immediately behind the bolster, wear that is completely consistent with the pitting and wear to the metal of the breech. There is one other area of significant wood wear just behind the lower barrel band, on the right side of the stock. This wear is clearly visible in the pictures below. The stock is in strong, solid shape, with no visible breaks, major cracks or repairs. There are a couple of minor surface drying cracks, but nothing significant or structural. There are also some minor drying and stress cracks visible inside the lock mortise and around the barrel tang area at the rear of the barrel channel. These are not visible from the exterior of the carbine and appear to be both very old and very stable, with no indication of weakness or becoming future structural issues.

Overall this is a really great looking, untouched and un-messed with example of a very scarce Confederate imported Pattern 1856 “Enfield” Cavalry Carbine. The gun has the incredibly desirable J S / (ANCHOR) Confederate import mark “ a mark that is very rarely encountered on secondary long arms like cavalry and artillery carbines. These guns come to market so seldom that it is often difficult to determine a clear market value for them. I do know that in 2007 an 1863 dated (ANCHOR) / S marked P-1856 carbine in just slightly better condition than this one sold at a prestigious auction house for just under $7,500 (including the buyers premium). This gun is not a near mint JS / Anchor marked carbine from a captured Blockade Runner, but a real Confederate used gun that saw serious field service. Although it is difficult to know for sure, the absolutely scarcity of JS / Anchor marked Pattern 1856 Cavalry Carbines makes me believe that there are probably no more than one to two dozen of these guns in existence. They simply do not appear on the market with any kind of regularity and it represents a real coup for Confederate arms collector to have the opportunity to add one to their collection. This is a lovely, no apologies, hard fought Confederate gun that any serious collector would be extremely happy to own.