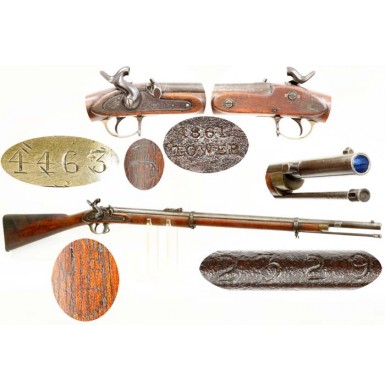 This is wonderful example of a rarely encountered Confederate imported P-1858 Naval “Short Rifle”. The gun bears the highly desirable Confederate J S / (ANCHOR) viewer’s mark behind the triggerguard, and has the Confederate inventory number 4463 engraved on the tang of the brass buttplate. During 1861 and 1862, the Confederacy let several contracts for the delivery of “Enfield” pattern percussion long arms of all varieties. Many of these contracts are well documented within the papers of Confederate General Colin McRae, which reside in the collection of the South Carolina Relic Room & Military Museum, in Columbia, SC. While the purchases concentrated on P-1853 Enfield rifle muskets for use by Confederate the infantry, a number of “short rifles’ were also procured, as well as a much smaller number of English cavalry and artillery carbines. Confederate documents reveal that one of the early orders included 30,000 P-1853 “Long Enfields’ (obtained from Sinclair, Hamilton & Company), as well as 10,000 “short rifles’ of varying patterns. The short rifle order appears to have been serviced by multiple vendors, with recovered documents revealing that Sinclair, Hamilton & Company delivered about 6,600, William Grazebrook delivered around 2,300, and S. Isaac, Campbell & Company delivered just fewer than 1,000. The 40,000 guns from these contracts (30,000 long and 10,000 short Enfields) are the ones that are found with the both the J S / (ANCHOR) viewer’s mark and Confederate inventory number markings. The “Long Enfields’ were serialized in three series, from 1-10,000, 1-10,000 A and 1-10,000 B. The short rifles were simply serialized in the 1-10,000 range, without a series letter suffix. The short rifles were mostly a mixture of standard British Military Pattern 1856 and Pattern 1856 Type II (also known as the Pattern 1858 “Bar on Band”) iron mounted rifles, as well as non-standard, commercial brass mounted Pattern 1856 and Pattern 1856 Type II rifles. A handful of the brass mounted Pattern 1858 Naval Rifles, and a very few Pattern 1860 and Pattern 1861 rifles (both iron and brass mounted) were also purchased. According to the Summary Statement of Overseas Purchases, prepared by the Confederate Secretary of War on February 3, 1863, a total of 9,715 Enfield “Short Rifles” had been purchased by that date. The Naval rifle was equipped with a bayonet lug on the right side of the barrel, near the muzzle, to accommodate a special “Cutlass Bayonet”, an extra-large saber style bayonet with an iron basket hilt that allowed the bayonet to do double duty as a boarding cutlass. While the Confederate Navy did purchase 1,000 Pattern 1858 Naval Rifles with cutlass bayonets (also marked with the JS / Anchor inspection stamp and with engraved inventory numbers from 1 to 1000), the Army did not want to use the overly large, heavy and cumbersome cutlass bayonets, preferring instead the standard Pattern 1856 semi-Yataghan blade saber bayonet. It appears that Caleb Huse purchased some 700 Pattern 1858 Naval Rifles from the firm of Sinclair, Hamilton & Company, in two groups. The first order, dated June 11, 1861 was for 200 rifles with an additional purchase of 500 rifles on June 27, 1861. The rifles are referred to a “Sea Service Rifles “ New Service Pattern”, but the order specifically notes that the guns should be: “fitted with the same bayonets as the Short rifles”. It is believed that these 200 Naval Rifles were probably shipped via the blockade-runner Gladiator. According to the few copies of manifests and bills of lading that have been recovered that include short rifles in blockade runner cargoes, we know that at least 700 “short rifles’ were part of the cargo of the famous blockade runner Gladiator, and at least some short rifles were recovered from the wreck of the blockade runner Modern Greece.

The Pattern 1858 Naval “Short Rifle” was an improved version of the standard British military land service short rifle of the era the Pattern 1856 Rifle. Like the Pattern 1856 Rifle, the Pattern 1858 had a 33” barrel, with a .577 caliber bore. The “Naval” rifle had a heavier barrel than that Pattern 1856 Army version, and was rifled with 5-grooves instead of the usual 3-grooves used in the P-1856 rifle and the P-1853 rifle musket. The bore also had a faster rate of twist, at 1 turn in 48”, rather that 1 turn in 72” that was the current standard. The 5-groove, faster twist rifling proved quite effective, and with the adoption of the P-1860 Short Rifle, 5-groove rifling at a rate of 1:48 combined with a heavier barrel became the norm for all future Enfield pattern percussion short rifles. The rear sights of the rifles were graduated to 1,100 yards (rifle musket sights were graduated to 900 or 1,000 yards), and were set just behind the rear barrel band; further forward on the barrel than the sights used on the rifle musket. This placed the sight in a more advantageous place, allowing the shooter to more easily focus on it. It is worth noting that the change in rifling, rate of twist and sight placement were all the result of experimentation performed by Colonel Crawford Hay, the commandant of the British Military School of Musketry at Hythe. While the Pattern 1856 rifle had its rear sling swivel attached to a lug, screwed into the rear of the extended iron triggerguard tang, the Naval rifle had the swivel mounted on the front of the brass triggerguard, as it was with the rifle musket and utilized the same short tanged brass triggerguard as the musket length weapon. In both cases, the upper swivel was attached to the upper barrel band. As with the Pattern 1853 rifle muskets (and all Enfield pattern arms of the time), the rifles had rust blued barrels and bands, and color case hardened locks and hammers. The furniture (triggerguard, butt plate, stock escutcheons, nose cap, etc.) of the “iron mounted” rifles was made of iron rather than brass, and was color casehardened and/or blued. In the case of “brass mounted” guns, this furniture was of brass, as found on the rifle muskets. Due to the difficulty of engraving a number in the case hardened buttplate tang, the iron mounted rifles that were inventory numbered were marked with their number in the wood of the stock belly, while the brass mounted rifles had the number engraved on the butt plate tang. The matching inventory number was also engraved on the forward portion of the ramrod and on the reverse pommel cap of the matching saber bayonets.

Short rifles were lighter and handier than rifle muskets, and were preferred for use not only by Confederate infantry that functioned as skirmishers and sharpshooters, but by Confederate cavalry that tended to operate as mounted infantry, rather than as traditional light or heavy cavalry. Confederate cavalry commanders J.E.B. Stuart and Nathan Bedford Forrest were both proponents of issuing short rifles to their cavalry troopers. Short rifles with saber bayonets are known to have been issued to Confederate infantry regiments serving in Kershaw’s South Carolina Brigade, the 10th, 16th, 18th & 51st Georgia, the 13th, 17th, 18th, 19th & 51st Mississippi, the 41st Tennessee, the 1st Battalion of Texas Sharpshooters, and the 5th Texas. Mounted Confederate units that are known to have been issued the “short Enfield rifle” were Cobb’s & Phillip’s Legions of Georgia, the 18th & 19th Mississippi cavalry (McCulloch’s Brigade of Forrest’s 2nd Cavalry), the 2nd North Carolina cavalry, the 3rd, 6th, 9th & 27th Texas cavalry (Ross’ brigade) and the 7th Virginia cavalry. Today, a multi-decade survey of extant surviving Confederate marked and inventory numbered short rifles reveals approximately 100 of these guns have survived; about 1% of the total numbered purchased by the Confederacy. While some are in private collections, others reside in museum or other public collections where they can be viewed, but never owned by a collector. It is worth bearing in mind that the Confederate central government purchased three times as many P-1853 long Enfields as short Enfields, making a numbered short rifle a very difficult item to find for sale these days. These guns tended to be relatively early war acquisitions and often saw three to four years of service, meaning that most surviving examples are in well worn, heavily used condition.

Overall this is a VERY GOOD+ example of a scarce Confederate marked and numbered Pattern 1858 “Naval” Short Rifle. With a maximum of only 10,000 of these numbered short rifles having been purchased by the Confederate Government for the use of the Confederate Army, these guns are hardly common. In fact, a database that has recorded extant Confederate numbered rifles that have been inspected over the last 2-3 decades reveals only about 100 of those 10,000 guns have survived, a survival rate of only 1%. Interestingly, only two numbers have been documented above the 46XX range. This suggests that most the numbered rifles above that point may been at the bottom of the ocean, either due to blockade runners sinking, or the dumping their clandestine cargoes while being pursued by the US Navy. No matter the reason, these guns remain quite rare and not often found for sale. This is a really wonderful example that clearly fought most the war, and has survived in fairly crisp, and amazingly complete condition, even retaining an original (if mismatched) ramrod with an engraved Confederate inventory number. The rifle is particularly nice in that it is one of the brass mounted “Naval Pattern” Confederate rifles, which have always been more aesthetically pleasing to me than their iron mounted brethren. The gun retains a nice, visible and completely original JS / (ANCHOR) inspection mark in the wood and a very crisp engraved inventory number on the buttplate. Confederate short rifles of this quality rarely come to market and this is one you will be very proud to own and never have to make a single apology for.