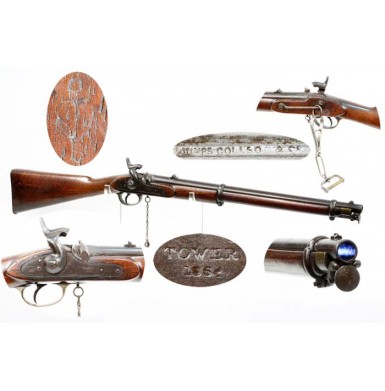 The P-1856 Cavalry Carbine is a rarely encountered Civil War era long arm, and even those carbines without Confederate import marks bring significant prices due to their low production and importation numbers. The US Government only purchased about 250 of the carbines, and the Confederacy (by the accounts of most scholars) purchased only about 10,000 of the guns. Most of the Confederate purchased cavalry carbines appear to have been acquired and delivered during the last half of the war. In fact, the Payne Ledger, which details the late war Confederate imports through the port of Wilmington, NC notes that some 4,700 English cavalry carbines were landed there between July of 1863 and November of 1864. These guns were marked with the (ANCHOR) / S Confederate viewer’s mark on the comb of the stock, forward of the buttplate tang. The gun are invariably dated 1863 or 1864, unless they are London made carbine that bear the maker’s name on the lock and no date. At least some of the earlier guns, acquired before the fall of the 1862, were struck with the JS / (ANCHOR) inspection mark in the same location. Purchasing documents located in the McRae papers indicate that Caleb Huse purchased 120 Pattern 1856 cavalry carbines from S. Isaac, Campbell & Company on August 1, 1862. He paid 65 schillings each for these guns, and they were shipped to the Confederacy aboard the blockade-runner Gladiator. Huse purchased one additional case of 20 carbines from the same source on August 6, 1862 for the same price. These guns crossed the ocean in the hold of the blockade-runner Harriett Pinckney. These two orders only account for 140 of the carbines, and may be an indication of why the JS / (ANCHOR marked guns are so incredibly scarce and are rarely encountered for sale. To date, the Confederate marked P-1856 carbines that are known have had locks marked TOWER (Birmingham contractor produced guns), BARNETT, or in extremely rare instances EP BOND and Parker, Field & Sons. While 10,000 cavalry carbines may seem like a significant number to have been imported, it is quite low when compared to the fact that most researchers put the total of all “Enfield” pattern English arms imported by the Confederacy at somewhere between 300,000 and 500,000. Even by the most lenient standards, that puts the importation of P-1856 cavalry carbines at between 3%-4% of all Enfield pattern arms obtained by the Confederacy. Their absolute paucity on the collector’s market underscores the fact that these guns saw hard use during the war and were used up, or even destroyed, in the field. Extant examples of Confederate marked P-1856 carbines tend to appear in two conditions; heavily used and well-worn, or nearly mint guns from captured Confederate Blockade Runners. In either case, the guns are very scarce and are rarely found available for sale. One reason for their lack of survival comes from the Report of William H. H. Terrell, Adjutant General for the State of Indiana. The report dated December 1865 concerning the Seventh Indiana Cavalry states in part

"On the 21st of December (1864) the Seventh Cavalry moved from Memphis with a cavalry expedition under General Grierson. On the 28th Forrest's dismounted camp at Vernon, Mississippi, was surprised and captured, and a large quantity of rebel stores destroyed, including sixteen railroad cars, loaded with pontoons for Hood's army, and four thousand new English carbines."

This clearly indicates one clear reason for the scarcity of these guns. When the Federal troops captured them, they destroyed them. As nearly all US cavalry regiments were armed with some form of breech loading carbine at that point in the war, a muzzle-loading carbine was of no real value. However, US troops regularly used captured CS imported Enfield rifle muskets, as they were of use to the infantry.

The British Pattern 1856 Cavalry Carbine was anachronistic when it was adopted by the British military, and in the words of British military arms researcher and author DeWitt Bailey, was a “stop-gap measure”. The British, like their American counterparts, had concluded that the breechloading carbine was certainly the wave of the future for cavalry use. However, even though American models by Sharps and Greene had been tested, on clear winner had emerged. It is possible that the British wanted to allow their own designers the necessary time to come up with a breech loading carbine of British origin, but while that happened the obsolete smoothbore Pattern 1844 and Pattern 1847 carbines had to be replaced. Although the Pattern 1847 Padget Carbine had been upgraded in 1852 by rifling the bores. However, the punishing recoil from the .685 caliber rifled guns was clearly not the solution in an era where the “small bore” rifled P-1853 long arm had become a world standard. The Pattern 1856 Carbine was a continuation of the Pattern 1853 family of arms, and was the smallest in the series that included a “short rifle” (33” barrel), an artillery carbine (24” barrel) and finally the cavalry carbine with its diminutive 21” barrel. Like all the other arms in the family the P-1856 Cavalry Carbine was a .577 caliber muzzle loading, percussion ignition firearm. The carbine was brass mounted and the barrel was secured by two Palmer pattern clamping barrel bands and a screw through the breech plug tang. The gun incorporated a captive swivel ramrod and a sling bar and ring to help adapt it to mounted service. Rather than the adjustable, long-base Enfield pattern rear sight, a small fixed block with two flip-up leaves for 200 and 300 yards respectively was incorporated into the design. The carbine went into production in June of 1857 and remained unchanged until it was upgraded in 1861 with a newer rear sight and the rifling was changed from three-groove uniform depth to five-groove progressive depth. The Pattern 1856 cavalry carbine saw most of its service with the cavalry serving in India, and while it was being issued, trials and testing of various breech loading designs (including the Calisher & Terry, Sharps, Greene, and Westley Richards “Monkey Tail”) continued in hopes of finding a more suitable weapon. It is likely that as many (if not more) of the guns were made commercially for export that were produced for use by the British military. The absolute dearth of appropriate cavalry longarms in the south made the British P-1856 carbine a logical choice for Confederate arms purchasers who were already buying long Enfield rifle muskets by the hundreds of thousands.

This particular example of a Confederate Imported British P-1856 Cavalry Carbine was produced by the firm of Pryse & Redman, and the gun is clearly marked with the later war Confederate viewer’s mark of an (ANCHOR) / S on the comb of the stock, forward of the buttplate tang. The firm of Pryse & Redman was established in 1842, a partnership of Charles Pryse and Richard Redman. Pryse had been in business since about 1838, and in cooperation with Paul Cashmore had patented a double-action percussion revolver known universally as the “Daw” revolver, as George H Daw was the primary retailer of the design. During the Civil War era, the firm was located at 84 Aston Street in Birmingham, and certainly concentrated on the production of military pattern arms for sale to the American combatants. The firm also produced handguns, including M-1854 Beaumont Adams revolvers under license for the London Armoury Company as well as Deane-Harding patent revolvers, to which the firm was a partial assignee of the patent.

Overall this is a very nice looking gun that shows hard Confederate use, but also has a great “untouched” look. These (ANCHOR) / S marked P-1856 cavalry carbines are very rarely encountered, and are a must for any serious Confederate cavalry collector. Considering the prices demanded for Confederate made cavalry carbines, the CS marked English import guns are a real bargain. In fact, this gun is priced at less than half of what you would expect to pay for a rather rough condition Richmond Sharps! For any collector of Confederate cavalry arms, a P-1856 is a must have item. It is also an essential addition to any collection of English imported arms used by the Confederacy. I’m lucky to see one or two Confederate marked P-1856 cavalry carbines for sale in a year, and often the guns are in extremely rough condition. This gun clearly fought and saw service, but was cared for well and never abused. Thankfully it was never cleaned and today has that wonderful plum-brown patina that is so attractive and displays so well. I am quite sure that you will be very pleased adding this scarce Confederate marked carbine to your collection.