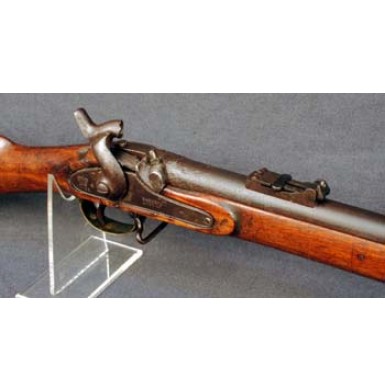 In the collecting field Civil War era British imported weapons, probably no import mark is more widely known and as iconic as the mysterious JS / Anchor. While this mark is clearly a Confederate viewing/import mark, scholars are still divided as to its actual meaning. The JS / Anchor mark is typically associated with Confederate imported Enfield pattern rifles, muskets and carbines, as well as Kerr revolvers. In most cases, the rifles and muskets that are extant today also have an engraved number on their buttplate (as well as their bayonet and ramrod), as part of the accounting process to check the receipt of guns purchased by Caleb Huse. Due to the time and expense involved, the number engraving process was discontinued by the end of 1862. As a result, Enfield pattern guns imported from the end of 1862 through the end of the war that exhibit the JS / Anchor mark are found without a number on their buttplates. Offered here is one of those later Confederate imported Enfield Rifle Muskets, probably from early 1863. The gun is a typical London contract P-1853 Type III rifle musket, by one of the most famous London gun makers, Barnett. The Barnett gun making family in London could well be termed a dynasty, as the family stayed in the gun making trade for over 100 years! The founder of the family business was Thomas Barnett who worked from 1796 until 1810, when the firm’s name was amended to & Sons. It operated under than name until 1832, by which time one of the “sons’ had hung out his own shingle working as John Edward Barnett (1816-1842) and then eventually as & Sons from 1842-1901. During the time of our interest, the firm was operating as John Edward Barnett & Sons and had its business at the original 134 Minories address established by the patriarch of the family, as well as a second manufactory located at Duncan Street. In typical English gun making fashion, while Barnett had the contract to deliver this gun, he utilized sub contractors to produce various parts and then assembled the gun and delivered it. The lock is marked with the maker name J BRIDGEWATER inside, and the bottom of the barrel is stamped GUN BARREL ““, likely Gun Barrel Co. While these maker names are present on these components, the parts are also stamped with the Barnett name. The lock is marked Barnett internally, above the mainspring, but it is also marked by its actual maker in an arc around the mainspring boss. The maker mark is J BRIDGEWATER. Job Bridgewater was a Staffordshire based lock maker who operated from 1855 - “ in Darlaston. So although the gun is a “London” gun, made by a London maker, the lock has features that would be typical of locks made in Birmingham and the regions. The lock has the double line engraving around the edge as well as “feathers’ on the hammer, both of these features are not typically associated with a London made Enfield, but as we have demonstrated, the lock was not London made. I have been unable to locate any information on Gun Barrel Co, but will continue to do research. As is typical of handmade arms produced in Birmingham and London shops, the major components of the gun are all marked with a series of file slashes that served as assembly numbers to make sure that the parts, once hand fit together, would be assembled together. The bottom of the barrel, the ramrod channel and the top edge of the lock plate all bear matching file slash assembly numbers.

The gun is a classic Confederate import gun with a good JS / Anchor mark on the top of the buttstock, forward of the buttplate tang. The lock is marked externally with BARNETT / LONDON and without a date. The typical British Crown stamp is located at the tail of the lock behind the hammer, over the word TOWER. This odd marking with CROWN / TOWER on the tail of the lock is often found on Birmingham made locks used on London made guns. The breech is marked with London commercial view, proof and gauge marks. The lock functions crisply and works well on all positions. The gun retains its original, full-length ramrod, and the long-range rear site. Both the front and rear sling swivels are present, although the upper swivel may be a replacement and the barrel band screw on the upper band is definitely a replacement. The brass furniture has a deep, un-cleaned ochre patina that is very attractive. The metal surfaces of the gun have a great brown age patina with some areas of light freckling and minor variation in color from gray to brown. Other than the moderate pitting in the breech area, the barrel is mostly smooth with scattered areas of light roughness, pinpricking and peppering.

Overall the gun is in what I would call Confederate Fine & Used condition. Normally, Confederate guns are found in two conditions; truly fine and used to death. The fine guns are most often blockade-runner captured guns that often never made it into battle. The guns in the hands of Confederate soldiers saw hard use in the field and are often in very rough condition today. This is a Confederate gun that was actually used in the field, but was well cared for and not abused. The gun has all of the hallmarks of extensive use. The bolster and breech area of the gun show moderate pitting due to the use of corrosive mercuric percussion caps. The hammer has some damage to the skirt around the face with some metal loss, again from heavy use. The wood behind the bolster shows significant “burn out” commensurate with the wear and pitting at the breech. The bore is dark and dirty with scattered pitting and light rifling still visible. The stock shows significant bumps, rubs, dings and even some minor gouges from hard use in the field. There is a small crack (less than 2” long) on the right side of the stock from the brass fore end cap running towards the upper barrel band. The condition of the wood exactly matches the metal on the gun, used hard but always cared for. The stock also shows numerous small wormholes in the buttstock area. Wormholes are a unique condition only found in European wood, and Enfield stocks were made of Italian Walnut. There is some wood loss around the lock bolster area that originally made me suspect that the lock might not be original to the gun. However upon removal of the lock it was clear from the assembly marks and metal-to-metal fit that the lock, stock and barrel are all original to each other. The wood loss appears to be from improper lock removal, causing chips and wear in the mortise. The lock screw heads show significant slot wear, indicating that they were removed numerous times with whatever was available to use as a screwdriver. All of these little indicators show that the gun was often dissembled and cleaned in the field to keep it functional. It is interesting to note that the gun has the official Board of Ordnance stock length which is 1" shorter than most Enfields encountered today. This change in stock length was ordered by the British Board of Ordnance to reduce the length of pull of the gun. In general only those guns produced by the RSAF (Royal Small Arms Factory @ Enfield Lock) and those produced by the London Armory Company had the shorter stock. All of the contractors (in general) kept the original stock length through the entire production of the Enfield pattern. This makes the gun even more unique.

For any collector of Civil War arms, a good representative Confederate gun is always a true prize. With the prices of Richmond muskets through the roof (for one that has not been messed with) and with JS / Anchor marked Enfields often exceeding $3,000 for a cut down rifle musket, a good Confederate long arm can appear to be out of reach of many collectors today. This wonderful example of the Southern infantryman’s favorite primary weapon is priced below $3,000, and is a complete, great displaying example. When was the last time you saw a complete JS/Anchor marked Enfield under the mid $4,000 price point” If it had a numbered buttplate, the gun would be in the $5,000+ ranger. The lack of numbers makes it no less Confederate, and the hard use that this gun saw from importation in late 1862 or early 1863 is testimony to the desperate fighting that this gun was witness too during the last 2 years of the Confederacy. This is simply a wonderful Confederate rifle musket with the most desirable Confederate import mark from a well-known London maker with a strong Confederate association. All for the price of an upper-mid grade US contract rifle musket.