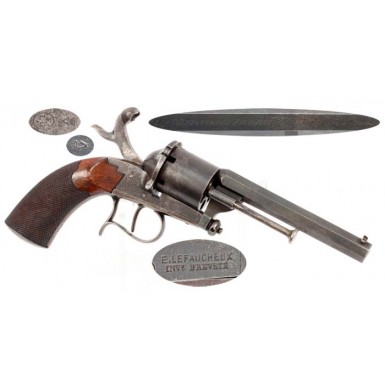 This is a very rare example of a “percussion pinfire” revolver, for all practical purposes it is a Belgian made M-1854 Lefaucheux Patent revolver, designed to fire a reloadable percussion ignition chamber insert. Rather than being designed to fire a conventional pinfire cartridge, the revolver used a chamber insert, known as a “Chimney Devise“. These reloadable metal inserts were filled with black powder and bullet was press fit into the front of the insert. A percussion cone (nipple) projected from the rear of the insert at a 90” angle, resembling a chimney. This cone passed through the slots at the rear of the cylinder chambers just like a pinfire primer did. Instead of being a self-contained primer, the chimney accepted a standard percussion cap. This meant that the pistol did not have to have expensive and sometimes difficult to acquire self contained ammunition, and the inserts could be loaded with easily obtained powder, bullets and percussion caps. It also gave the percussion revolver the ability to reload as quickly as a cartridge revolver, assuming additional loaded chamber inserts were carried with the gun. The chimney adapter is well illustrated as Plate 4-27 in Chris Curtis’ System Lefaucheux “ Continuing The Study of Pinfire Cartridge Arms Including their Role in the American Civil War. While a conventional pinfire revolver has a hammer with a flat face and tiny slots at the rear of the cylinder, the Chimney Device revolver has a percussion hammer face (recessed) and large square slots accept the square shoulders of the percussion cones. This means that these percussion pinfire variants could not fire pinfire ammunition, as the wide slots would not keep the priming pins in the correct, upright position, and the recessed hammer face would not impact the pins correctly. Some have suggested that the Chimney Device might have seen use within the Confederacy to keep pinfire revolvers in action when pinfire ammunition was not available. However, as explained above a Chimney Device was not usable in a conventional pinfire revolver, unless a replacement pinfire cylinder (and probably a replacement hammer) were available.

The pistol incorporates many of the patent features of Eugene Lefaucheux’s (son of Casimir Lefaucheux) M-1854 revolver. These include his hinged loading gate, the bored through cylinder and a frame mounted ejector rod. The pistol 9mm and is about 10 ]” in overall length with a 5 [“ long octagon barrel rifled with 7 grooves. As would be expected from an M-1854 pattern revolver, the gun uses a “single action” lockwork. Eugene & Gustave Pirlot (Pirlot Frères) of Li’ge, Belgium produced the revolver. The top of the octagon barrel is clearly marked: “INVN Lefaucheux Fils BTE Pirlot Frères “ Li’ge (Invention of Lefaucheux’s Son Patent “ Pirlot Brothers of Li’ge). The Pirlot Brothers were a major Belgian gunmaking company that operated in Li’ge from about 1840 to 1870. The right side of the frame is marked below the cylinder E. LEFAUCHEUX / INVN BREVETTE. The cylinder bears a traditional Li’ge black powder proof mark, an E / LG / * within an oval. The cylinder is additionally marked with the serial number 4074. If the pistol is disassembled the assembly number 5 is found on the face of the cylinder, on the face of the barrel lug that mates with the frame, on the rear of the frame (hidden by the grips) and on the face of the loading gate. Inside of the one-piece checkered grips are marked with the Roman numeral V. The pistol was imported into England, and bears a London commercial (CROWN) / V proof on the cylinder surmounting the Belgian proof and on the left barrel flat, near the cylinder.

The pistol is in about VERY GOOD+ to NEAR FINE condition. The revolver is crisply and clearly marked throughout. The barrel retains about 35% of its original bright blued finish, with the balance a smooth plum brown patina. The barrel is almost entirely smooth, and shows only some very tiny areas of lightly scattered pinpricking. The revolver’s bore is in about VERY GOOD condition. It retains strong, crisp rifling and shows only light to moderate scattered pitting, mostly within the deep grooves. The frame retains traces of the original blue, and again shows a mostly smooth plum brown patina. The cylinder has a dull blue-gray patina and shows some light to moderate peppering and pinpricking, mostly around the slots where the percussion caps were exposed. The hammer retains about 20%-30% of its original case coloring, which has faded and turned a silvery gray color. The hammer shows similar peppering and pinpricking to that found on the cylinder. The frame is neatly and attractively engraved with loose foliate scrolls patterns, and similar patterns are found engraved on the backstrap, frontstrap and triggerguard. The hinged loading gate is complete and functions correctly. The spring that locks the gate closed is weak and does not always lock tightly, but it still functions and typically locks as it should. The action of the revolver works fairly well. However, the hand spring appears to be weak and the cylinder will not rotate and index when the revolver is held with the muzzle facing up or down. When the revolver is held in a typical horizontal firing orientation, the action appears to work correctly. The frame mounted ejector rod is complete and functions as it should. The original front sight is in place in the dovetail near the muzzle, and the nose of the hammer serves as the rear sight when the revolver is cocked. The one-piece checkered walnut grips are in FINE condition. They retain about 85%+ of their original varnish and the checkering remains crisp and sharp throughout. The grips are solid and free of any breaks, cracks or repairs, and show only the most minor handling marks and minor wear.

Overall this is a really wonderful example of an extremely scarce Chimney Device “Percussion Pinfire” revolver. The gun is 100% complete and correct in every way, and needs only some minor mechanical tweaking to be a reliable and very usable percussion revolver. These guns are practically never found for sale, and offer an opportunity for the experimental material culture enthusiast to fire a pinfire revolver without the necessity of using expensive antique pinfire cartridges. Reproduction, reloadable brass pinfire chamber inserts are available for sale from online sources. For any serious collector of early cartridge revolvers, this is a piece that is almost certainly not in your collection. For a collector of pinfire revolvers, this is a variant that is probably not in your collection either. There is no doubt that at least some of these gun were imported into America (both North & South) during the Civil War era, as they would have been much more usable to the average person in a rural area than a pinfire cartridge revolver. This would be a great addition to any collection of secondary martial type mid-19th century revolvers.