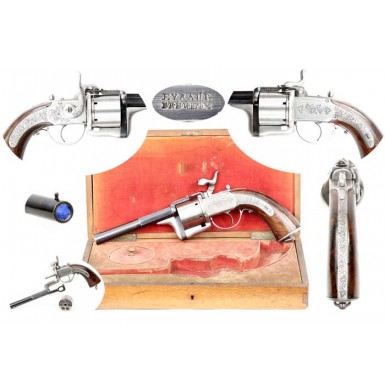 Jean Baptiste Eyraud was a French gunmaker and inventor who worked in the town of St. Etienne in central France from about 1825 through 1860. Eyraud’s working period ran from the end of the flintlock era through the early days of the self-contained cartridge period. One of Eyraud’s early patents was for a modification of John Rigby’s multi-barrel percussion system that used a single hammer with a moving hammer nose that could contact different cones (nipples) each time the hammer was tripped. While the Rigby patent system used a rotating disc at the end of the hammer, with movable hammer nose, Eyraud changed the moving disc to a moving arm, and applied it to both double barreled and four barreled percussion pistols. However, Eyraud is best known for his work with pin fire revolvers, for which he received at least two design patents. The first one was French Patent #38649, issued November 15, 1858. This patent covered a side hammer pinfire revolver with an action that could be opened by rotating the topstrap, cylinder and barrel to the right of the frame, allowing the cylinder to be removed from the frame. The cylinder arbor pin could then be used as a rudimentary ejector rod to remove spent cartridges from the chambers and new cartridges could be loaded into the chambers. The action was opened by pulling back on a sliding latch on the top of the frame that engaged a recess in the topstrap. The topstrap itself was an uncommon feature on French cartridge revolvers of the period, as the Lefaucheux design did not utilize one, nor did the competing Perrin or the Pidault Cordier (aka Raphael) revolver. Due to the sidehammer design, the top strap had to have a hole in the top through which the hammer nose could contact the primer pins of the cartridges. This design is similar to that found on the American self-priming revolver design of Jesse Butterfield. The sidehammer lock work is similar to that found on sidehammer percussion designs by Allen & Wheelock. The cylinder rotates around a conventional arbor pin, but is actually moved by an indexing plate located at the rear of the frame, which is only attached to the cylinder via a small locating pin on the cylinder that engages a corresponding hole in the indexing plate. The performance of this system was notoriously unreliable on the Allen & Wheelock revolvers, with most extant examples showing mechanical issues with timing. Eyraud’s design allowed for more rapid loading and unloading than the Lefaucheux system that used a loading gate and only allowed a single cartridge to be inserted or removed at a time. A later Eyraud French patent (#71170, issued April 26, 1866) improved the design by putting a hinge in the lower frame and allowing the barrel to tip down and the removal of the cylinder. No doubt similar designs by Devisme influenced this design. As most references note Jean Baptiste Eyraud’s working dates as ending in 1860, is it likely that the later Eyraud patent was acquired by Eyraud’s son, and if it was the father’s design, it may have been issued after his death. Today Eyraud’s 1858 Patent Revolvers are extremely scarce, suggesting that they may have only been produced for a very short period of time (possibly 1858-1860). Even the groundbreaking book System Lefaucheux by Chris Curtis, the most authoritative work on the pinfire system, does not picture a large frame, 12mm Eyraud’s 1858 Patent revolver, but only a smaller pocket model, along with a copy of the original 1858 patent papers.

The Cased Eyraud’s 1858 Patent Pin Fire Revolver offered here is in VERY FINE condition. The revolver is a single action, side hammer, large frame, 6-shot 12mm pin fire revolver that conforms to Jean Baptiste Eyraud’s 1858 patent. The revolver is approximately 12 ““ in overall length, with a 5 7/16” long octagon to round barrel that is rifled with four wide grooves and four narrow lands. The revolver’s frame and lock are finished in the white with delicately engraved foliate patterns on the sideplates, hammer and backstrap. Smaller matching foliate motifs are engraved on the buttcap, triggerguard and bottom of the frame. The engraving on the trigger guard is a little weak, and the guard shows some scattered oxidized discoloration. The balance of the engraving remains very crisp and sharp. The frame and cylinder retain much of their original high polished steel appearance, with the cylinder showing some lightly scattered surface oxidation and discoloration, that may be the result of perspiration and acidic handling. The octagon to round barrel is blued, and retains about 70%+ of its original finish, which is fading and thinning, showing most of the loss on the right side at the transition between the octagon and round portions, and wear and thinning along the high edges and contact points. The gun is clearly marked in two lines on the top of the octagon portion of the barrel:

The only other markings are the serial number (or assembly number) 6 which is found at the forward bottom portion of the frame, on the bottom of the barrel web and the face of the cylinder. The pistol is mechanically functional, but has a minor timing issue that sometimes results in the minor over rotation of the cylinder, throwing the indexing off slightly. This is probably due to wear to the internal mechanical parts. This same mechanical issue is regularly encountered on Allen & Wheelock sidehammer revolvers that use a similar indexing plate to rotate the cylinder. The sliding frame catch on the top of the revolver functions smoothly and the action opens exactly as it should with no mechanical issues noted with the opening or closing of the action. The bore of the revolver is in about GOOD+ to NEAR VERY GOOD condition. The bore retains strong rifling, but shows light to moderate pitting along its entire length. The pistol retains its original front sight, rear sight that is incorporated into the topstrap and the original lanyard ring in the butt. The two-piece varnished walnut grips are highly figured and are extremely attractive. They remain in FINE condition with no breaks or repairs. The grips do show a couple of very tiny chips, along their rear edges where they contact the backstop, and a small grain crack at the upper front portion of the right grip, where it meets the frame. The grips retain the majority of their original varnish and other than the couple of tiny chips, show only a handful of minor dings and handling marks.

The revolver is contained in its original retailer casing, which is a varnished oak case with a maroon crushed velvet fitted interior. The interior is somewhat faded and discolored from age. The interior includes a single round lidded compartment, possibly for the storage of ammunition. The casing is not configured to accept any accessories or accouterments. The varnished case is in about VERY GOOD condition and shows the usual assorted bumps, dings, scuffs and mars that would be expected from a 19th century revolver case. The casing has the usual brass “bible” hinges and the expected lock mechanism in the front center of the case, although the key for the lock is missing.

Overall this is a really fine and crisp example of a very scarce French pinfire revolver that is rarely encountered for sale. Surviving examples of Eyraud’s 1858 Patent Revolver are very scarce, and large frame, 12mm examples (especially cased examples) are extremely hard to find. This is wonderful example that would be a great addition to any collection that focuses on early cartridge handguns, pinfire revolvers, French firearms or unique and innovative action systems. I have no doubt that you will be very proud to add this wonderful revolver to your collection and display.