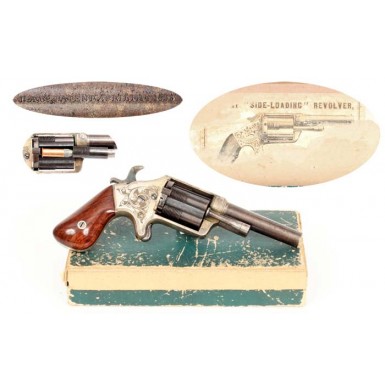 This is a wonderful example of the unique Brooklyn Arms Slocum Side Loading Pocket Revolver (Flayderman 8A-032), complete with its original pasteboard box. The revolver design featured an ingenious method of evading the Rollin White’s 1855 patent for the bored-through cylinder, which White had assigned to Smith & Wesson in 1856. Smith & Wesson’s control of this patent made it very difficult for competitors to manufacture a self-contained cartridge revolver between 1856 and 1869, as any bored through cylinder was a violation of that patent. Various designs appeared during the era in an attempt to circumvent the patent, ranging from front-loading systems like those of Plant and Moore, to more convoluted systems like the Slocum side-loading cylinder. The system was designed by Frank P. Slocum of Brooklyn, NY, and received US patent #38294 on April 14, 1863. Slocum’s patent for an “improvement in revolving firearms” centered around his “Side Loading Revolver” concept. The revolver was loaded and unloaded by placing it on half cock and rotating the cylinder to align with a plunger post on the right side of the frame. Sliding a small lever at the rear of the cylinder allowed the chamber cover to be slid forward over the fixed plunger. Cartridges could then be inserted or removed from the chambers. The Slocum patent pistols were single action revolvers with spur triggers and chambered for the .32 rimfire cartridge. They had a five shot cylinder; a 3” round barrel and semi-bag shaped walnut grips. The pistols were typically manufactured with a silver plated brass frame and with blued barrels and cylinders. However, the guns were also produced with plated finishes. The frames of the pistols were lightly scroll engraved with floral motifs. The Brooklyn Arms Company produced around 10,000 of the revolvers in 3 basic variations between 1863 and 1864. The success of the unique pocket revolver design was partially due to smart design and partially to good marketing. The pistol was chambered for the .32 rimfire cartridge that had been introduced by Smith & Wesson. Choosing to use a readily available cartridge, rather than special, “patent”, ammunition, gave Slocum an advantage over his competitors. In fact, in his advertising, this “advantage” was the fourth reason listed as to why his design was preferable to the competition. According to Slocum’s pamphlet, the ADVANTAGES of the “SIDE-LOADING REVOLVER” were as follows:

It can be Carried in the Pocket with Safety when Loaded, As the Hammer can be put into a Safety Notch in the Cylinder, and is not obliged to rest upon the Cartridge.

It can be Loaded in the Dark. The peculiar arrangement of operating the Cylinder in combination with the Lock enables it to be loaded as quickly and surely in the Dark as by Light.

It is Surer Fire. By a slight rotating movement given to each of the Chambers, the Cartridge can be struck on more than one part of the Flange, by the Hammer, without removing it from the Chamber.

It does not require Special Ammunition. Being loaded with the regular flanged Metallic Cartridge, in use by Smith & Wesson, and other makers.

Perfect Rotation of the Cylinder. The expansion of the Cartridge Case is confined within the Moveable Chamber. There is no chance for the Cylinder being prevented from Rotation by the Wedging of the Head of the Case against the Recoil Plate.

Great Strength. The Frame is made out of a solid piece “ there are no joints to be strained apart or to wear by friction. The Cylinder, with Moveable Chambers, is much stronger than the ordinary Cylinder, as the Chambers are of equal thickness all around the Bore, and are made from the best material, carefully examined an tested before being placed in the Cylinder Bed.

The Centre Pin. Can be oiled without removing the Cylinder, which cannot be said of any other Revolver.

All of these reasonably sound arguments likely helped to make this one of the more successful cartridge firearms to compete with the Smith & Wesson #1 and #2 series of pistols, without violating their patents.

The Brooklyn Arms Company Slocum Side Loading Revolver offered here is in VERY FINE condition overall and retains its original box. The pistol is finished in the standard way for a Slocum, with a silver plated brass frame and a blued barrel and cylinder. The frame retains about 65%+ thinning silver-plate overall, with the right side retaining about 70%+ and the left side about 50%+ thinning silver. The grip strap and lower portions of the frame retain about 70%+ silver as well, while the backstrap retains about 10% silver. The cylinder and sliding chambers retain about 50% original blue, with the balance fading and flaked to a smooth plum-brown patina. The barrel retains about 10%-20% faded and flaked blue, and has aged to an equally pleasing plum-brown patina that matches the balance of the revolver well. The metal of the barrel is mostly smooth, with some lightly scattered pinpricking and lightly oxidized surface freckling present, mostly near the muzzle of the pistol. The case hardened hammer retains about 80%+ vivid case coloring with lovely blues and purples, and is starting to fade and dull somewhat along the edges and contact points. The balance of the hammer is fading to a smoky gray patina. The checkered spur trigger retains about 40% original blue, which has faded and dulled, having mixed with a smoky blue-gray patina. The screws in the frame of the revolver remain crisp with little or no slot wear, and all retain at least 50% of their original fire blued finish, with some fading and wear. The grip screw retains only some light traces of faded blue, and shows some light slot wear. The unique sliding chamber loading mechanism works as it should, with the chamber covers sliding over the stationary plunger rod forward of the frame. The action of the pistol functions correctly, with hammer working at both half and full cock and the trigger functioning appropriately. The handspring appears to be weak, or the hand might be slightly short, as the cylinder does not always revolve every time the hammer is cocked, but it usually does. The cylinder sometimes over indexes and sometimes under indexes, further indication that that a worn hand may be the culprit here. The barrel of the pistol is crisply and clearly marked in a single line: B. A. Co PATENT APRIL 14th 1863. The forward portion of the lower frame is marked with the serial number 369, indicating the gun was a very early production revolver and manufactured in 1863. The assembly number 45 is marked internally on the major components, including the frame, cylinder, cylinder arbor/plunger rod and inside both of the grip panels. The two-piece grips are in about EXCELLENT condition with no breaks, cracks or repairs. They retain about 90%+ of their original varnish and are quite attractive. They do show a handful of normal handling marks, bumps and minor dings. The pistol is accompanied by its original green pasteboard box and five rounds of .32-rimfire ammunition. The box is in about VERY GOOD condition, and retain the majority of the green paper covering over the cardboard shell. The paper hinge is in good, functional condition, but is delicate and should not be over worked. There are a couple of weak corners that are starting to separate, and the green covering is lifting in a couple of areas. The front edge of the lid is the weakest part of the box and should be handled with the utmost care. The internal cardboard dividers are in amazingly good condition and remain solid and strong. The inside lid retains about 60% of the original past in label, and thankfully, most of the picture of the pistol is present. Five rounds of .32-rimfire ammunition are included in the box for display. They have the D head stamp of Canuck Brand, Canadian Industries Ltd. This is not antique ammunition, but was probably manufactured circa 1940-1950. It is certainly not safe to shoot in the Slocum, but displays well with it in the box. A photocopy of the original advertising page for the pistol is included as well.

Overall this is a really attractive example of a truly unique early cartridge revolver that used an ingenious system of avoiding the potential to run afoul of the Smith & Wesson held Rollin White bored through cylinder patent. These interesting pistols were moderately successful during the middle of the American Civil War and their unique mechanism and looks make them a great addition to any Civil War ear revolver collection. This one is in much nicer condition than most examples that are encountered and retains its extremely rare, original cardboard box. This will be a wonderful item to display with your collection of early cartridge an Civil War era revolvers.