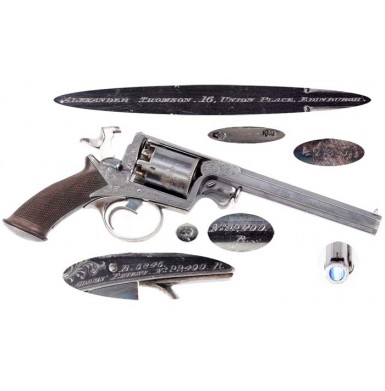 This is one of the rarest and least often encountered variations of the M-1854 Beaumont-Adams percussion revolvers, the .50 caliber Dragoon, a true hand cannon of its time. The massive revolver is 13 ““ in length and weighs in at a hefty 2lbs 14oz, just shy of 3 pounds. Robert Adams and his licensees manufactured these revolvers under Adams’ solid frame patent. In 1851 Adams was granted a patent for significant improvements to revolvers by patenting a unique design with the barrel and frame forged as a single piece of steel. This made the pistol incredibly strong and was a much stronger system than any of the other revolvers system then commonly in use, particularly those used by Colt which used a wedge to attach the barrel to the frame and had no top strap to reinforce the frame. Adams also received patents for a spring-loaded, frame mounted safety device and a spring based cylinder arbor latch. All of these features are found in this wonderful Dragoon sized holster revolver. These fine quality solid frame revolvers were as important to the history and development of the revolving handgun as were the developments and designs of Sam Colt. Adams additionally patented a self-cocking lockwork, which today would be referred to as “double action only”. This mechanism cocked the hammer, rotated the cylinder and released the hammer, all as the result of a single pull of the trigger. While this allowed for rapid fire, the long, heavy trigger pull inhibited accurate firing. These designs were incorporated into Adams M-1851 self-cocking revolvers. In 1854 Lt. Frederick Beaumont developed an improvement for Adams’ lockwork, which produced what would be called a traditional “double action” revolver today. The new lockwork allowed the revolver to operate in the fashion of Adams’ original design, but also added the facility to cock the revolver manually and fire it with a lighter “single action” trigger pull. This refinement allowed for more accurate shooting. Interestingly the development still required the trigger to rotate and index the cylinder, unlike Colt’s design, which rotated the cylinder simultaneously with the cocking of the hammer. In 1854 Adams also patented refinements to his original frame design by adding a sliding frame mounted safety on the right side of the frame and an improved cylinder arbor retaining mechanism as well. The resultant combination of design improvements was manufactured as the M-1854 revolver, known to most collectors as the Beaumont-Adams revolver. The revolvers were produced directly by Adams as part of his partnership with the London based Deane, Adams & Deane, as well under license by Birmingham makers like Joseph Brazier, Isaac Hollis & Sons. William Tranter also employed Adams solid frame in the production of his revolvers. Upon the dissolution of the Deane, Adams & Deane firm, Adams went to work for the London Armoury Company (circa 1857-1858), and his revolvers were produced there as well. Even after Adams left the London Armoury Company to reestablish his own firm, London Armoury continued to produce Adams patent revolvers at least until the early 1860s, well into the period when they were manufacturing Kerr patent revolver. Over the years it has been the 54-Bore (.443 caliber) Adams revolvers that have had the most association with the American Civil War, and little evidence has been available regarding the importation of the 38-Bore (.50 caliber) “Dragoon” sized revolvers. However, recent scholarship has uncovered that at least a handful of the .50 Adams revolvers were purchased and imported by the Confederacy and at least one dug example indicates that some of these pistols made it into the field. According to documents in the National Archives, eight cased Adams 38-Bore “Dragoon” revolvers were included in the cargo of the ill fated blockade runner Elizabeth. The Elizabeth was owned by John Fraser & Co and was captured on May 29, 1862 while trying to enter the port of Charleston, SC. Listed in the cargo manifest was a case of revolvers, marked A within a rhomboid, and the case contained “eight Deane, Adams & Deane 8 inch revolvers, in cases complete”. The barrel length clearly indicates that these were the large bore, .50 revolvers and not the more common 54-bore guns. The pre-war barrel markings suggest that these guns were purchased from existing inventory in English gun shops, likely by arms speculators, rather than the Confederate central government purchasing agents. Further indication that these large bore revolvers saw use during the war is a dug example with a 7 ““ barrel that was recovered near Brandy Station by a relic hunter in the 1960’s. This dug example with its history and provenance recently sold from an Internet relic web site. Additionally, a small number of .50 M-1854 Beaumont-Adams revolvers are known, in private collections, with the names of Confederate General Officers and staff officers engraved on the rights side of the pistol near the barrel to frame junction. One example of an identified and engraved .50 Beaumont-Adams will be auctioned at James D. Julia’s in March of this year. That example is named to B. F. Ficklin. Lt. Colonel Benjamin Franklin Ficklin served as a staff & field officer during the war, initially with the 45th Virginia Infantry. He appears to have spent most of his service on detached duty in and around Richmond and had at least some involvement with the procurement of ordnance. It is believed by researchers that Ficklin was at least partially responsible for the acquisition of the .50 caliber Beaumont-Adams Dragoon evolvers that saw use with the officer corps of the Confederacy. Another example is known which is named to General G.C. Wharton, who commanded a brigade composed of the 45th VA and 56th VA at Fort Donelson. Obviously, the connection between Wharton and Ficklin is clear, as they served in the same brigade. Thus the period documentation, and at least one field recovered example indicates that the Confederacy did purchase at least a few of these massive revolvers and some of them did see use in the field.

The revolver is in mechanically excellent condition and functions flawlessly in all ways. The double action mechanism, timing, indexing and locking up are all excellent and the revolver functions perfectly in single action mode as well. The gun retains 90% of its original bright blue throughout. The finish loss is mostly confined to the sharp edges of the 7 1/8” octagon barrel, the back strap and the trigger guard, the butt cap, and a few small areas on the frame where the bluing has flaked. The barrel is clearly and deeply marked with a pair of London commercial proof marks. The 5-shot cylinder is blued, which is the more common finish for the Beaumont-Adams revolvers. Many of the earlier M-1851 revolvers had casehardened cylinders. The cylinder retains a similar amount of blue as the balance of the gun, with the only significant loss being a thumb-sized area below the serial number, which is probably where the cylinder of the revolver rested on cloth for a very long time. All of the original cones (nipples) are present at the rear of the cylinder, and are in very crisp condition. They even retain their original brass spacers between the cone and the rear the cylinder. All of the metal surfaces of the frame and barrel is smooth and in excellent condition. In typical Adams fashion there is some light foliate scroll engraving present on the frame, between the grip and the cylinder, and just forward of the cylinder at the barrel junction. The bore is in EXCELLENT condition and is quite bright, with wonderfully crisp rifling, and only some very lightly scattered pinpricking present along its length. The spurred hammer retains its original polished bright, “in the white” finish. The original Kerr’s Patent loading lever is in place on the left side of the pistol and operates perfectly. It rams smoothly and locks securely into place when not in use. The rammer retains about 70% of its original bright niter blued finish with strong purple tones with most of the wear and loss on the actual rammer and at the friction joint near the front of the cylinder. The reverse of the lever is marked 4293, the Kerr patent tracking number for royalty payments on the design. The Adams patent sliding safety is present on the right side of the frame, and works exactly as it should. These safeties are often broken and missing. The safety retains about 70%+ of its original bright niter blued finish, with only some minor fading and finish loss, especially where the safety is handled to engage and disengage it. The Adams improved arbor pin retention thumbscrew is present and works exactly as it should as well. This is another small part that is often missing or broken. The original dovetail mounted front sight is present and in wonderful condition as well. The butt of the pistol has a compartment to retain spare cones. This is a feature most often encountered on the earlier M-1851 self-cocking pistols and is not common on the later Beaumont-Adams designs. The one piece checkered walnut grip is in equally nice shape and rates about VERY FINE condition. The grip matches the condition of the revolver perfectly. The grip is solid and complete with no breaks or repairs. There is a tiny, hairline grain crack on the right side of the grip at the upper frame to grip juncture. There is also one very tiny chip of wood missing along the lower right edge of the grip, just below the trigger guard at the grip strap junction. These two minor issues are the only real condition issues with the grip at all. Otherwise, the grip retains crisp and sharp checkering, and shows only the usual handling marks and a few tiny dings.

Overall the gun has a great visual presence and displays exceptionally well. This wonderful and rare large caliber Adams would be an outstanding addition to any collection of Civil War era or English percussion revolvers. It is in fantastic condition that is absolutely stunning and is in a caliber that is rarely found available on the collector market today. This is the exact pattern of revolver that has been identified to a number of significant Confederate officers, and would be a wonderful example of the Adams “Dragoon” revolvers that many of them acquired. This is a very scarce gun that is rarely found for sale, especially in this condition, and it would surely make a wonderful centerpiece to any advanced percussion revolver collection.