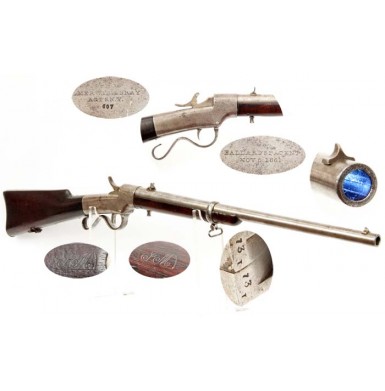 This example of the Ballard 56-56RF Carbine is in VERY GOOD condition. The gun is complete, correct and fully functional. The gun is clearly marked in two horizontal lines on the upper right side of the receiver: BALLARD’s PATENT / NOV. 5, 1861. The opposite side of the receiver is marked: MERWIN & BRAY AGT’s / NEW YORK / 607. As is typical of Dwight, Chapin & Company 56-56 Ballards that were assembled by Ball & Williams, the gun bears the markings of neither company. The gun is the correct round-frame design with a round 20” barrel and a split breechblock. The breechblock is assembly numbered 73 on each side, and also has a single 1 on each side, upside down from the “73” marking. Unlike the Ball & Williams produced guns (versus Ball & Williams “assembled” guns), this carbine does not have a serial number on the major components like the extractor, hammer, etc. The gun does, however, bear a pair of US military inspector cartouches. One is located on the wrist and one is on the comb of the stock, directly in front of the buttplate tang. They both appear to be a script JM, and I am not sure which inspector they reference. As previously noted, the gun is in VERY GOOD condition. The metal is smooth throughout, with only the smallest scattered patches of light peppering and pinpricking and some tiny specks of lightly oxidized roughness. The gun retains none of its original blued finish, but has a smooth pewter gray patina, mixed with scattered patches of lightly oxidized freckling and age discoloration. This patina is evenly distributed over the barrel, frame and breechblock. The hammer and operating lever appear to retain small traces of their original finish, mixed with the same smooth gray patina and light freckling. The carbine functions exactly as it should and is mechanically excellent. The breechblock moves freely when operated and locks tightly into place, as it should. The small closure stud that secures the operating lever at the rear of the trigger tang is broken, as is often the case with Ballard carbines and rifles. As a result, the lever does not lock into the closed position. This is a minor inconvenience. The hammer functions correctly, and automatically assumes the half-cock position when the breechblock is opened. The hammer locks crisply into the full-cock notch as well, and responds to the trigger, as it should. The extractor system of the carbine is complete and fully functional, and the spring remains extremely strong. The original L-shaped, two-leaf rear sight is present on the top of the receiver. It retains some traces of its original blued finish and is clearly marked with the 200 YDS and 300 YDS graduations. The slight is fully functional and rotates into its two positions, as it should. The original front sight, near the muzzle, is present as well. The gun also retains both sling swivels. The bore of the carbine rates VERY GOOD in condition. It is mostly bright and shiny, with extremely crisp 5-groove rifling. The bores shows scattered patches of light to moderate pitting along its length, mostly in the grooves. The stock of the carbine rates about NEAR FINE. The stock retains very crisp edges and sharp lines, showing no signs of sanding. The buttstock does have a couple of small surface cracks along the lower portion of the reverse side. These are minor and the result of drying wood. They are tight and stable and in no way structural. The buttstock and forend are complete and solid and are free of any breaks or repairs, but do show some of the usual scattered bumps, dings and rubs that one would expect from a military carbine which saw actual service and use. The stock has a lovely reddish-brown tone and appears to retain much of its original oil finish. A small cross or “X” is lightly carved in the obverse buttstock, and may have been a bit of personalization from the soldier who carried the carbine. As noted above, a pair of very nice script JM inspection cartouches are present on the carbine, one on reverse wrist and one on the stock comb.

Overall this is a very crisp and attractive example of an extremely scarce US military secondary issue breech loading carbine. Most references confirm 115 guns delivered by Dwight, Chapin& Company, and suggest that a few more may have been accepted after Ball & Williams took over the contract. This appears to be one of those handful of very rare guns that was accepted by the US military after the failure of Dwight, Chapin & Co. The gun is complete and fully functional and displays wonderfully. You certainly don’t need any imagination to see the inspection cartouches, as they are clearly visible at a distance. This is one of those very rarely encountered US military carbines that is missing from practically every advanced Civil War carbine collections, and it would be a wonderful addition to your collection.