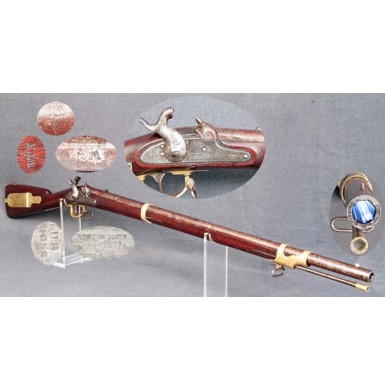 This is a very interesting example of what appears to be a Harpers Ferry Arsenal rebuilt and refurbished US M-1841 Mississippi Rifle. The gun is an interesting mix of parts, which appear to be completely correct together, even though they were not originally assembled together. The rifle has a Remington contract M-1841 rifle lock, which is dated 1852. The lock is clearly marked: REMINGTON’s / HERKIMER / N.Y. in three lines forward of the hammer and is marked in two vertical lines behind the hammer: U.S. / 1852. The barrel appears to be a Robbins & Lawrence contract barrel, which bears the expected inspection marks for their contract rifles. The breech is marked U.S. / JPC / P. The breech plug tang is dated 185”, with the obscured number appearing to be a 3. The JPC mark is that of Armory Sub inspector James P. Chapman, who inspected both Whitney and Robbins & Lawrence contract “Mississippi” rifles. As the Whitney arms he inspected would be marked “JPC / VP” and most post-1850 Whitney barrels are stamped “STEEL” on the flat (this one is not), I am completely convinced that this barrel was produced by Robbins & Lawrence. The barrel is additionally marked with an inverted W.C.K. on the barrel flat, just forward of the bolster. This is the mark of Harpers Ferry Sub Inspector William C. Kirby. This same mark is often found on Harpers Ferry altered Mississippi rifles. It is in fact a mark showing that the barrel had passed a second proving. When Harpers Ferry started to alter M-1841 rifles to the modernized variants with long-range rear sights and bayonets, they preferred to alter the rifles that had been manufactured with steel barrels instead of iron barrels. This meant that most of the initial alterations were confined to post-1850 production Harpers Ferry arms, Whitney’s test run of 2,000 steel barreled rifles made in 1848 & 1849 (marked STEEL) and later production Whitney barrels (also marked STEEL). While Remington contract rifles were all manufactured with steel barrels (which are also marked STEEL), they were in store at the Watervliet Arsenal in New York and did not get sent to Harpers Ferry for alteration, only repair as needed. After the readily available supply of steel barreled M-1841 rifles had been altered, Harpers Ferry started to use iron-barreled rifles for the alterations. These guns had their barrels re-proved and W.C. Kirby stamped his acceptance mark on the barrels after they passed this additional proof test. The gun also bears Kirby’s W.C.K. on the stock flat, opposite the lock. The stock is not a Harper’s Ferry stock, and does not have the tell tale router pilot holes in the patch box. The stock is unmarked, except for the date 1848 which is stamped under the buttplate, and for Kirby’s mark on the flat. The butt plate has no “US’ mark, which indicates that it was manufactured at Harpers Ferry. All of this evidence together convinces me that the gun was rebuilt at Harpers Ferry, using a stock of various parts on hand there. Kirby’s mark appears on the stock flat of the long-range sight and bayonet altered rifles that were produced at Harpers Ferry. This stock bears no other cartouches or acceptance marks, indicating that it is a replacement stock and was only “inspected” by Kirby either for replacement use or after it had been reassembled. The national armories had a long history of repairing and refurbishing arms from the other armories in the country. As Harpers Ferry was the only arsenal in the 1850’s equipped to work on rifles, rifles in need of repairs would have been sent there, and a stock of parts was maintained there for their repair and maintenance. In American Military Shoulder Arms - Volume III by George Moller, he notes during his discussion of the issuance and alteration of M-1841 rifles that:

“On January 27 and 29, 1855 Colonel Craig ordered Major Harding at Saint Louis Arsenal to hold 3,000 repaired rifles and contract rifles, as well as 100 long-range rifles ready for issue to General Harney’s expedition against the Sioux."

According to Moller’s research, most of the rifles that were being sent to installations in the west (St. Louis, Fort Leavenworth, Fort Riley, etc) were shipped from Harpers Ferry. While it is not clear if this Harpers Ferry rebuilt Mississippi rifle was one of the 3,000 being held for potential service against the Sioux, or was one of the “Herkimer Rifles’ that was sent South by Secretary of War John B Floyd immediately prior to the outbreak of the Civil War is not clear. Of course a third possibility is that this gun represents one of the guns produced by the state of Virginia after the Confederacy took over Harpers Ferry in 1861. They assembled a number of arms from parts on hand, and sent them to Richmond for issue to Confederate troops. What is certain is that the gun was rebuilt with a brand new replacement stock, a Remington lock and a Robbins & Lawrence barrel, and subsequently returned to an arsenal for storage, probably until the outbreak of the coming war.

The Harper Ferry Refurbished M-1841 Mississippi Rifle offered here is in VERY GOOD+ to NEAR FINE condition. The only condition issues with the rifle appear to be the result of some poor storage at some point during its service life. As previously noted, the Remington lock is clearly marked. The lock functions very well on all positions and remains very crisp and mechanically excellent. The lock is very smooth and has a mottled smoky gray patina. It retains some very minor traces of the mottled case coloring. The hammer shows an interesting casting flaw near the hammer screw, which normally would not have passed inspection. This may lend credence to the theory that the gun was assembled from parts at the arsenal by the state of Virginia. The barrel is also well marked, as previously noted. The barrel retains about 20%-30% of its original browned finish on the exposed surfaces, and about 80% of the brown under the barrel, where the finish has been protected by the stock. The balance of the exposed barrel is a mottled plum brown over gray patina, which has mixed with the original lacquer brown. The exposed surfaces are mostly smooth, with a few exceptions. The breech area shows moderate pinpricking and light pitting from percussion cap flash, as would be expected. The rest of the barrel shows a handful of small, thumb-sized patches of oxidized surface roughness scattered along the length of the barrel. These patches appear to be the result of storage in a damp environment. The bore of the rifle rates about VERY GOOD. It is in the original .54 caliber, with 7 deep, narrow grooves. The bore is mostly bright, with some darker patches, and scattered light to moderate pitting along its entire length, especially in the grooves. The rifle retains its original fixed rear sight and brass blade front sight. The brass furniture has a mellow golden patina that is very attractive. The patchbox shows some scattered lightly oxidized age sots. The rifle retains both of its original sling swivels, and an original, full-length brass tipped ramrod is in place in the ramrod channel, complete with excellent threads on the end. The ramrod has been altered with cupped tip for use with elongated (conical) .54 caliber ammunition. The stock of the rifle is in about VERY FINE+ to NEAR EXCELLENT condition. It is full length and free of any breaks or repairs. The wood to metal fit is exceptional, and clearly all of the parts of this rifle were professionally fit into the stock during the period. The stock is very crisp with sharp edges and lines and has never been sanded or messed with. Even the ramrod channel remains crisp and sharp with no wear or splintering. The patch box cut out is extremely crisp and the original spare cone (nipple) is in place in the patchbox. The stock does show a handful of light scattered bumps and dings from handling and storage, but nothing really significant. The only stock issues worth mentioning are a couple of minor grain cracks. There is a minor stress crack, with the grain, which runs along the bottom of the wrist, nearly perpendicular to the triggerguard tang. This is a minor age crack that appears tight and stable. There is also another tiny surface grain crack above the patchbox running into the butt about 1” from the butt plate. Both of these cracks are indicative to me of a stock that was not properly seasoned prior to using it. Neither appears to be structural, and neither is a detriment to the display of this rather high condition rifle.

Overall this is a very attractive and rather crisp example of what is a very interesting rifle that is truly worthy of additional research. While it is not common to find mismatched M-1841 rifles on the market today, most of them had their parts intermingled in the century after the Civil War and were not mixed prior to during it. This rifle is in my opinion completely correct for a gun that went through a rebuild or refurbishment at Harpers Ferry. What is not completely clear is who was in control of the arsenal when the gun was reassembled, the US or the Virginia state government. Either way, this is a very attractive rifle that is all original and period correct and in a very attractive and high state of condition. For an advanced Mississippi rifle collector, this may be your one opportunity to obtain a rebuilt but unaltered M-1841, with a nice set of WCK inspection marks and bore you could shoot today.