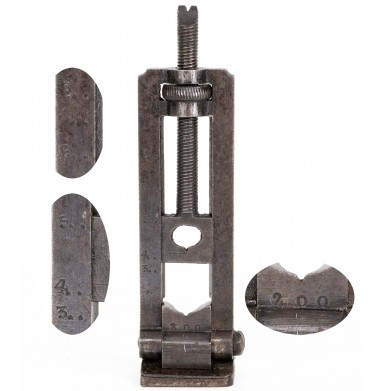 In 1854 it was undertaken at Harpers Ferry to start the alteration of many of the US Model 1841 “Mississippi” Rifles in inventory there for the use of the newly adopted conical expanding base ammunition of James Burton’s design, based upon the French Minié Ball. The first “alterations” involved little more than modifying the ramrods with new steel concave heads to ram the new ammunition. However, it was rather quickly decided that in order to better take advantage of the increased range and improved ballistic coefficient of the ammunition that a long-range rear sight should be added to the guns as well.

The new sight, sometimes referred to by collectors as the Benton Sight in deference to its designer Lieutenant James G. Benton, was referred to as the “screw pattern long range rear sight” by the Ordnance Department and in at least one letter possibly as a “hinged rear sight”. This sight was a folding leaf that presented a 200-yard fixed notch when the leaf was folded down, and which was graduated from 300 to 700 yards on the left side rail. The sight was adjusted via a screw mechanism at the top of the leaf that moved an oval aperture with a V-shaped sighting notch in its lower center up and down the interior of the sight body. These new sights were mounted in the same location as the original fixed notch sights on the rifles, although the width of the original sight dovetail had to be slightly enlarged. The earliest version of the Screw Pattern Sight did not include a spring in the base to hold the sight in the upright or folded position. This improvement was officially ordered as of December of 1854 and it appears most examples of the sight were produced with this feature, or upgraded with it, as very few of the sights without the feature are known.

Records indicate that 590 newly made Harpers Ferry US Model 1841 Rifles were equipped with the new Screw Pattern Sight in fiscal year 1854. These first 590 long-range rifle modifications were not modified to accept a bayonet when they received their new rear sights, although it appears that most were later modified to accept the “Ring Pattern” bayonet attachment system, known to collectors as the Snell modification. An additional 1,041 M1841 Rifles were upgraded by the addition of the Screw Pattern Sight and saber bayonet lugs during the end of Fiscal Year 1854 and early Fiscal Year 1855. According to the research of the late George Moller, he believes that most of the rifles with Screw Pattern Sightswere issued by the end of calendar year 1854. These rifles apparently went to St. Louis Arsenal, Carlisle Barracks and Benicia Arsenal in California. The guns that went to St. Louis Arsenal were primarily issued to the 4th and 6th US Infantry Regiments, which were spread out at multiple western locations including Ft. Leavenworth (KS) Jefferson Barracks (MO), Fort Riley (KS), Fort Kearney (NE) and Fort Laramie (WY).

Today collectors have categorized the early Screw Pattern Sight altered Harpers Ferry Rifles as Type I alterations, while the Benton improved Enfield-style sight guns are known as Type II alterations. Within those designations are some sub-variants depending upon the type of bayonet lug utilized, as well as some changes in the graduations on the Type II sight. As noted, original Type I rifles are quite scarce and when found are often missing the rear sight or only the sight base is in place on the guns. It is not clear what was done with any excess Screw Pattern Sights that were in inventory at Harpers Ferry, either left over from the original project and never used or those that were removed from guns that received Type II sights. However, based upon surviving examples documented by Murphy & Madaus in the iconic work Confederate Rifles & Muskets, at least a few were later installed on Confederate altered US Model 1841 Rifles that were not manufactured at Harpers Ferry. It is not clear if these sights had been sold off as surplus prior to the Civil War or if they were part of the thousands of parts that were captured when the arsenal was taken over by the Virginia state forces in April of 1861. This may make the most sense, as these parts could have easily been distributed to southern gunsmiths that were altering Mississippi Rifles with long range sights and were additionally adapting them to accept saber bayonets.

Offered here is a VERY FINE condition example of an extremely scarce Harpers Ferry Screw Pattern aka Benton Rear Sight for use on a Type I Harpers Ferry Mississippi Rifle Alteration. The sight is 100% complete, correct and fully functional. This is the standard variant of the sight with the spring in the base that locks it securely into either the upright or folded down position. The sight is clearly marked 200 on the fixed notch and then graduated 3..  4..   5..   6..   7..  on the left ladder. The sight ladder measures 2 ¼” tall by ¾” wide with the dovetail base measuring .5” by .7”. As noted, the sight remains fully function and the long-range aperture adjusts smoothly up and down the ladder when the knurled adjustment screw at the top of the ladder is turned clockwise or counterclockwise. The sight retains some flecks of original bright blue but has a mostly dark, dull blue-black appearance with some scattered freckles of surface oxidation and discoloration. The sight metal is free of any real pitting, although there are some light flecks of surface roughness here and there and a small amount of pinpricking under the base.

Overall, this is an extremely rare rear sight that would be the perfect way to restore your Type I Harpers Ferry altered Mississippi Rifle if your sight is missing or broken. It would also be a great addition to a collection of original rear sights from Civil War era long arms for study. These sight almost never appear on the market for sale and for the collector who needs one to restore his rifle, they are nearly priceless.