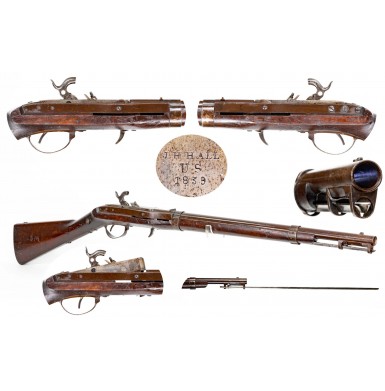 Although the US Model 1833 Hall Carbine and Model 1836 Hall Carbine are officially two different models, their history and genesis are best considered together, for in reality they represent four variants of the same basic design.

The M1833 Hall was initially adopted for issue to the newly formed 1st Dragoons. The Dragoons were the first official mounted regiment to be added to the standing US Army since the War of 1812. Rather than serving as traditional cavalry, the Dragoons were considered to be “mounted infantry”, utilizing the speed and mobility of the horse, but equipped to fight dismounted as infantry. They were additionally equipped with pistols and sabers to fight as traditional mounted cavalry as well. The Dragoons were primarily a response to the increasing pressure for westward expansion in America, and the expected resistance from the native population that was not in favor of giving up their lands to American settlers. The regiment of mounted Dragoons was considered an economical alternative to the building and manning of more frontier forts and outposts to protect settlers heading west. The Dragoons were to be armed with the most advanced long arm of the day, a breech loading, percussion ignition carbine, which would be easy to handle, load and fire from horseback. The pattern adopted, the Model 1833, was the first breechloading percussion carbine to be adopted by any military in the world and was the first military percussion long arm to be adopted anywhere, preceding the use of the percussion cap on the Model 1841 “Mississippi Rifle” by nearly a decade in the United States. The M1833 also introduced the “ramrod bayonet”, a rather clumsy and worthless design that the American military would have a love affair with for nearly a century, with the same basic design being resurrected during the 1880s for use on Trapdoor rifles and in the early 20th century with the Model 1903 rifle.

Initial orders were placed in 1834 for 1,028 24-bore (.58) smoothbore carbines with 26 3/16” long barrels and 25 ¼” long ramrod bayonets. The guns were ordered from Simeon North, the only contractor to produce the Hall Patent breechloading rifle. The reason the carbines were smoothbore was to accommodate buck and ball cartridges, which were considered the most efficient combat load for a long arm. These were the Model 1833 Type I Carbines. The guns were issued to the First Regiment of Dragoons, who put them to good use at various posts throughout the west. The guns also included a covered implement compartment along the toe line of the stock, with a hinged iron door. Subsequent orders were for the Type II Model 1833 carbine, which had a reduced caliber of .52. These were manufactured between 1836 and 1839 and were initially ordered to arm the 2nd Regiment of Dragoons, which had been organized to help fight the Second Seminole War (1835-1843).

Almost immediately there was a hue and cry from within the Ordnance Department regarding these additional arms. North was not considered to be in a position to deliver the carbines with any speed, due to his outstanding orders for Hall Rifles and other small arms. Additionally, a slowdown in manufacturing at the Harpers Ferry rifle works (due to lack of rifle orders by the government) was threatening to result in layoffs and terminations from that pool of skilled laborers. Finally, there was the long-standing US government policy to arm “regular” Army units with small arms produced at the National Armories and to arm volunteers and state militias with arms produced by contractors. All of these problems and objections were solved by the adoption and ordering of the new Model 1836 Hall Breech Loading Carbine, which was to be manufactured at the Harpers Ferry Rifle Works. This would keep the workmen diligently employed, would relieve the pressure on North to deliver the carbines quickly and would provide a source for government manufactured arms for the newly formed 2nd Regiment of Dragoons. In order to put the carbine into production as quickly as possible, with as few alterations to existing machinery as possible and to reduce the need to build new machinery and fixtures, some changes were made to the M1833 design to make it more like the M1819 rifle that was already being produced at Harpers Ferry.

The end result was that the Model 1836 carbine closely resembled a shortened Model 1819 rifle. The exterior barrel dimensions remained the same for both the rifle and the carbine, except for length. The new carbine was manufactured with a somewhat handier 23” barrel, instead of the longer 26” barrel used on the Model 1833. The sliding bayonet was also shortened from 25 ¼” to 22 ¼” in length. The bore of the barrel remained smooth, but the caliber was increased to .64. The rational was that this allowed the use of the current service musket ball, which was a .64” round ball, used in the .69 smoothbore Model 1816/22/28 series of muskets. Instead of machining a plate, sling bar and ring, a simple eyebolt stud was devised and mounted through the wrist of the carbine to allow attachment of a sling hook. The percussion hammer, which was one of the initial stumbling blocks to production at Harpers Ferry, was manufactured with a hole through its center. This allowed the hammer to held in a jig during the machining processes. It may also have allowed the using of some of the older flintlock hammer machining jigs and fixtures, as those hammers also had a hole between the neck and jaw. It is worth noting that the Model 1836 was the first percussion arm manufactured at a national arsenal, and as such was a learning experience for the engineers and workmen.

These first 1,000 carbines also included the implement storage area in the toe line of the butt that had been incorporated on the first Model 1833 carbines. The first 1,000 carbines were ordered in 1836 and delivered in 1837. The majority of the guns were issued almost immediately upon receipt, for use by the 2nd Regiment of Dragoons in Florida. The Model 1836 carbines were plagued by the usual problems of gas leakage, etc. that haunted all Hall designs. In 1839, an additional 1,000 Model 1836 carbines were ordered from Harpers Ferry. These guns, known as Type II Model 1836 carbines, included some minor changes from the earlier Model 1836 carbines. First the implement compartment was eliminated as an unnecessary feature which only increased the time and expense in manufacturing the carbines. Additionally, the slots in the stock that allowed gas to escape from between the stock and receiver were enlarged about 30%, from .13” to .17”. This change alone should make it clear that gasses escaping from the breech block were the bane of the Hall design. The thickness of the barrel was also increased about .05” to strengthen the barrel. These 1,000 carbines were all manufactured and delivered in 1839, and again, most of them ended up seeing service with the 2nd Regiments of Dragoons in Florida, fighting the Seminoles. In all, only 2,020 M1836 Hall carbines were produced, including the Type I, Type II and prototype and experimental carbines. This is one of the few instances where a national armory produced a specific pattern of arm for issue to one specific regiment within the regular army.

This US Model 1836 Type II Hall Carbine is about EXCELLENT condition. The gun is 100% complete and correct in every way and remains very crisp and sharp throughout. The top of the breechblock is clearly marked in three lines: J.H. HALL / U.S. / 1839 as are all Type II Model 1836 carbines. The Model 1836 bears no other markings, nor should it. It is interesting to note that while the Model 1819 rifle and Model 1836 carbines were produced at Harpers Ferry, no inspector ever marked any of the arms. This was very different from all other arms produced at Harpers Ferry, which bear a myriad of sub-inspection marks, as well as the inspection initials or cartouches of one or two senior inspectors and often the Master Armorer. This may be because the Rifle Works had originally been established as a public-private partnership and for most of its existence operated as a separate entity from the main arsenal, with its own budget and not under the control of the Master Armorer of the primary arsenal.

The action of the carbine functions perfectly and it is mechanically excellent. The breechblock pivots smoothly and locks tightly into battery, releasing as it should, when the release lever is pulled. The hammer locks crisply into the half and full cock positions and responds to the trigger correctly. The sliding ramrod bayonet functions smoothly as well, with the under-muzzle release freeing it to be extended and locking it securely in place one it is drawn to its full length. The ramrod bayonet is full-length and retains excellent threads on its reverse end to allow the use of the bayonet as a cleaning rod. The exterior breechblock of the carbine retains about 30%+ of its original dull blue-black casehardened finish, with the top of the block being more of a silver gray patina with some hints of mottled color and the sides of the block being darker and retaining more mottled color. The barrel of the carbine retains about 85%+ of its original brown lacquered finish, with some scuffs, surface dings, thinning and loss. The largest area of loss is around the muzzle area where the sliding bayonet is manipulated. The furniture retains less of the brown, due to handling wear, most notably the triggerguard and buttplate. The balance of the metal where the brown has worn, shows a medium brownish-gray patina, with some lightly scattered patches of age discoloration. The metal is mostly smooth, with some small patches of very lightly oxidized surface roughness and scattered minor pinpricking present. The bore of the carbine rates EXCELLENT and is nearly all mirror bright and extremely smooth. Only some very lightly scattered pinpricking and freckled oxidation is present in the bore. The ramrod bayonet is full length, remains sharp, and as noted above, and functions exactly as it should. The bayonet has a medium steel patina, with scattered flecks of light surface oxidation and age discoloration. The carbine retains both of its original sights, with the offset rear block and offset blade front sight both in place and undamaged. The original “eye bolt” style sling swivel mount remains in place through the wrist of the stock and is undamaged. The stock of the carbine rates about VERY FINE+ to NEAR EXCELLENT. It is full length, solid and free of any breaks, cracks, or repairs. Amazingly, the stock has even escaped the “Hall Crack” at the top of the wrist behind the receiver, the result of improper disassembly of the gun. This crack is found in about 80% of surviving Hall breechloaders. The stock retains strong lines and crisp edges and shows no indication of having been sanded. The wood even retains some of the feathery texture of a new condition stock, although handling has worn away most of this. The stock does show the usual assortment of scattered bumps, dings, and mars from service, use and storage. The most noticeable handling mark is a moderate sized ding that is relatively deep on the reverse of the stock in the receiver area. The stock also shows a few moderate surface scratches and scuffs. The most notable stock issues are the initials WC, carved upside down somewhat sloppily into the obverse butt and an “X” lightly cut into the wood on the obverse at about the middle of the receiver area, just below the gas vent cutout. Despite these two added marks, the wood remains very crisp, and the stock is particularly attractive.

Overall, this really is an outstanding example of a scarce, Harpers Ferry produced Model 1836 Type II Hall Carbine. With just over 1,000 Type II carbines produced, including prototypes and samples, this is a very scarce carbine to find. It would be a great addition to any US military carbine collection and would be a fabulous centerpiece to a 2nd US Dragoons or Seminole War display. This is a top-notch example of a rare gun, in a great state of preservation, that will be a wonderful addition to your collection and very difficult to upgrade.