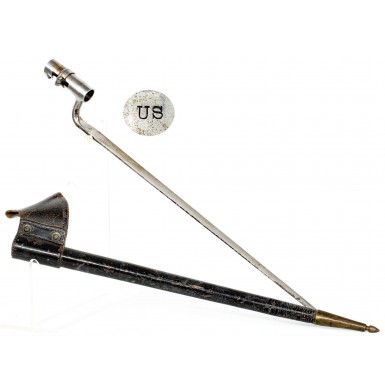 This is a VERY GOOD example of the US Model 1855 Type I .58 Socket Bayonet, complete with an original Civil War era US Pattern 1859 Bayonet Scabbard in similar condition. Neither the bayonet nor the scabbard is maker marked. Over 1,500,000 of the .58 caliber Model 1855 socket bayonets were produced during the Civil War era, and the bayonet had a service life of nearly three decades, from its acceptance in 1855 through 1873 when it was finally replaced by US Model 1873 bayonet for the .45 caliber US Model 1873 Trapdoor rifle. During that time, the M1855 was the standard socket bayonet for all US .58 percussion rifle muskets, and many of the early Allin conversion alterations of Civil War muskets to breechloading rifles. The bayonet remained unchanged during this period except for a very minor update that took place in November of 1863 and would be incorporated into production during January of 1864. This minor change was to cut the locking ring mortise an additional .2”, allowing the ring to rotate slightly further when clamping the bayonet to the musket, thus insuring a tighter fit. Collectors refer to these later production M1855 bayonets with the longer mortise cut in the locking ring “Type II” M1855 bayonets, while those produced with the earlier shorter cut are “Type I” bayonets.

When the M1855 socket bayonet was adopted, the standard bayonet scabbard was the US Pattern 1851. This was the first general issue scabbard to incorporate an attached folded leather belt frog to the scabbard body. Earlier pattern US scabbards typically used a frog hook on the face of the scabbard to attach the scabbard to a cross belt, baldric or separate belt frog. The leather belt loop of the Pattern 1851 scabbard was secured by stitching it to a piece of leather that wrapped around and was sewn to the throat of the scabbard. Collectors refer to this style of assembly as “sewn only.” In 1859, an updated version of the P1851 scabbard was adopted to accompany the new series of infantry accouterments that had been approved in 1857. This new Pattern 1859 scabbard added two reinforcing rivets at the junction between the belt loop and the leather piece sewn around the throat of the scabbard. Collectors refer to this style of construction as a “two rivet” scabbard. The specifications also changed the construction of the belt loop from blackened buff leather on the P1851 to black bridle leather on the P1859. This pattern remained in use from its adoption through February of 1863, when another update was adopted to the scabbard design. The Pattern of February 1863 increased the number of rivets in the frog from two to seven, resulting in the collector’s nickname of “seven rivet” scabbard. It also eliminated sewing in the frog and added two additional pins to the face of the brass finial at the tip of the scabbard. Originally, the tip of the P1851 and P1859 scabbards was secured with two small brads that entered through the rear of the finial, attaching it to the leather scabbard body. This was found to be insufficient in the field and in 1863 the number of brads was doubled and two were added on the front angled surfaces of the finial. Due to the fact that the Pattern 1859 scabbards were in use prior to the Civil War and the heavy use that these scabbards saw during the first two years of the war, they are scarce on the modern collector market. When a P1859 scabbard is found, it usually shows heavy use and often the finial is replaced or repaired.

This US Model 1855 Type I Socket Bayonet is in about VERY GOOD condition, as is its accompanying US Pattern 1859 “Two Rivet” Bayonet Scabbard. The bayonet is full length, with a complete and fully functional Type I original locking ring. The bayonet has a medium gunmetal gray patina over most of its surfaces, with only the last 3”-4” of the blade face showing any major discoloration or oxidized surface roughness. This area is likely the result of being stored in the scabbard long term, causing the small patches oxidized surface roughness on the faces, as well as flecks of surface oxidation along the right edge of the blade. There is some flecked surface oxidation and age discoloration here and there on the blade and socket with more of it on the rear of the bayonet’s blade than on the face of it. There is also some old, thick surface oil on the bayonet, mostly on the socket and around the locking ring. The ricasso of the blade is deeply and clearly struck with the usual US mark.

The scabbard is in about VERY GOOD condition as well. The scabbard is full-length and retains all of its stitching along the rear seam and in the belt loop area. This stitching is all tight and secure. The original brass finial is in place at the tip of the scabbard, secured by the two original brass pins. Original Pattern 1859 scabbards are rare enough but finding one with an original finial tip that has not be replaced or repaired is quite difficult. The scabbard body remains solid and quite usable, but the surface shows moderate crazing and finish loss. The area that shows the most wear is the 3”-4” area directly above the finial, where the crazing is significant and suggest that the scabbard body was bent in this area at some point in time. The belt loop shows some moderate crazing as well. There are some areas of flaked finish loss here and there on the body and frog, particularly along the raised median ridge of the scabbard body and on the leading and trailing edges of the belt frog. The frog is somewhat stiff and has adopted a somewhat bent profile. Despite this, the leather remains pliable enough to allow the scabbard to be added to an infantry accouterment belt. There appears to be some old added black finish on the leather, most evident due to the traces of black on the two copper rivets in the belt frog. The rivets are original and also show a moderate amount of dark green verdigris. Despite the wear and obvious use, the scabbard remains very solid, is 100% complete and correct and is a very nice, rare example of a scarce early war scabbard.

Overall this is a very nice set worthy of addition to a nice set of infantry accouterments or to add to the display of a US Model 1855, Model 1861 or Model 1861 Special Model .58 rifle musket. While this would certainly accompany a M1863, M1864 or early, pre-1873 Trapdoor rifle as well, the fact that the bayonet is the pre-1864 variant and the scabbard is the type used from 1859 through early 1863, it would be most appropriate to add these items to the earlier pattern .58 caliber rifle muskets. Solid, attractive, complete and correct socket bayonet and scabbard sets are getting harder and harder to find, and 150+ year old leather scabbards are deteriorating and disappearing at an alarming rate. This is a very nice set that is fairly priced and will be a nice addition to your collection of American Civil War arms and accouterments.