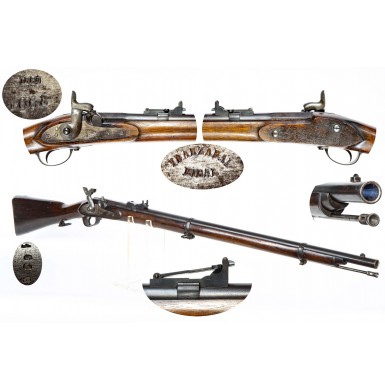 During the latter part of the 1850s, the Spanish military adopted a family of .577 caliber, percussion-ignition, muzzleloading long arms that were based upon the British Pattern 1853 “Enfield” series of arms. Like the British, the Spanish adopted both long barreled infantry rifle muskets, shorter barreled rifles, as well as a variety of specialty troops arms that included carbine models for use by cavalry and artillery, and some specialty rifles for engineers and marines. The two patterns that were produced in the largest numbers were the Carabina Rayada Modelo 1857 (Short Rifle Model 1857) and the Fusil Rayado Modelo 1859 (Long Rifle Model 1859). These two models closely resembled the British Pattern 1856 Enfield Short Rifle and the Pattern 1853 Type III Long Enfield Rifle Musket, respectively. Both had blued barrels, color case hardened locks and walnut stocks. The Modelo 1859 was a “three band”, full-length rifle musket that had a 39.25-inch barrel and an overall length of 54.5”. Unlike the British long Enfield, the Spanish model was iron mounted rather than brass mounted, had its lower swivel screwed into the toe of the stock, rather than attached to the triggerguard bow, and the ramrod had a brass band around its head to protect the rifling in the barrel. The rear sight of the M1859 was attached via a clamping band around the barrel, rather than soldered to the barrel like its British counterpart. The Modelo 1857 rifle was also iron mounted and even more closely resembled the British P1856 from which its design was derived. The two most obvious differences were the use of the clamping rear sight and the lack of a saber bayonet lug, as the M1857 used an angular socket bayonet, like the musket, rather than a saber bayonet. As originally produced, the short rifle’s rear sight had rather tall side wall, but in 1859 the graduations for the rear sight were changed and after 1860 the rifles were produced with a rear sight with lower walls. It is likely that the change was the result of upgraded powder that allowed for a flatter projectile trajectory. A similar change was made in the latter 1850s to Harpers Ferry rifled and long-range sighted Model 1841 Mississippi Rifles, whose sights were re-graduated for essentially the same reason. The British also changed the graduations for the P1853 rear sight after a powder upgrade, with the sights being changed from 900-yard to 1,000-yard sights. Some additional minor changes in the design of the lock mechanism, in addition to the sight change, have led collectors to refer to these rifles as M1857/59. The M1857 remained in service as a front line arm until 1867, when a Berdan based cartridge alteration to the design was adopted, resulting in the M1857/67. As the transition to cartridge firearms continued over the next decade, the M1857, M1857/59 and M1857/67 all remained in service until fully replaced by the Spanish Rolling Block Rifles. As with most of the European colonial powers, the M1857 and M1857/59 saw its longest service in the various Spanish colonial holdings. In places like Cuba and the Philippines, the muzzleloading rifles remained in service well into the cartridge period of the latter part of the 19thcentury.

The Spanish M1857 and M1857/59 has long had a Civil War association, with indication of their importation and use by the Confederate south, albeit in relatively small numbers. Most of the early war purchases are associated with the Kentucky “Orphan Brigade”, while the later war purchases appear to have entered the Confederacy in Texas, having passed through Mexico on the way. Some good period documents discuss the various acquisitions by southern buyers, and the US government sold at least 392 surplus “Spanish Rifles” during the early 1880s that appear to have been captured from the Confederacy. One particularly interesting reference to the rifles appears in the Spanish newspaper La Iberia. The article, published on July 1, 1864 refers to the use of the Spanish Rifles both by Spanish colonial troops and their acquisition by Confederate buyers. The article reads in part:

“Units of the Spanish Army in Cuba are currently equipped with expensive and inefficient Liège rifles, while La Euscalduna (a Spanish arms contractor)has to sell their precision weapons to the Confederate South Commissioners, eager to buy them.”

The Spanish Carabina Rayada Modelo 1857 “Enfield Rifle” offered here is one of those early production guns that retains the original M1857 and has not been upgraded to M1857/59. The gun remains in NEAR FINE condition overall. The lock is smooth with a lovely mottled pewter gray color with traces of oxidized plum brown patina and works well on all positions. It is marked with the serial number 1668 at the tail of the lock, under the year of production 1860. The lock is marked by the contractor that produced the gun in a two-line cartouche forward of the hammer, with the upper line arched. This reads YBARZABAL over EIBAR. The Ybarzabal family was a multigenerational gun making family based in the Spanish city of Eibar, in the Basque region of Spain. Eibar was the Spanish equivalent to Birmingham in England as a center for arms manufacturing. Ignazio Maria Ybarzabal had established the family in the Eibar gun trade in 1784 and worked through 1798. In 1815, his son Gabriel Benito Ybarzabal took over the family business, which he operated until 1830. Gabriel’s son, named Ignazio for the boy’s grandfather, took up the family business in 1850 and operated Fabrica Ybarzabal through 1891. The interior of the lock is marked with a stamp that appears to read ARGUIARRC?G, possibly a contractor who made the lock. The assembly number 07 is present in the lock and inside the neck of the hammer. The guns is serial numbered 1668 throughout, with the number appearing on the lock, barrel, buttplate and triggerguard tangs and on the barrel bands. Spanish proofs are present at the right angled breech flat. As noted, the gun retains its very unique long-range rear sight, which is attached to the barrel by clamping, rather than being screwed or soldered. This is the early, M1857 version with the higher side walls. These odd sights are often missing when these rare guns are encountered today. The sight is in very good condition and fully functional. The exposed portion of the barrel retains some strong traces of the original blued finish, which has oxidized to an even and attractive plum brown patina. The bottom of the barrel (protected by the stock) retains about 60% of the original blue, which has faded and dulled. The barrel is mostly smooth forward of the rear sight, with only some lightly scattered peppering and pinpricking present from the sight forward. The breech area of the rifle shows more moderate pinpricking, the result of the caustic wear from the mercuric percussion cap flash. The bore of the gun is in FINE condition and retains very crisp rifling throughout. The bore remains mostly bright but shows some very light pitting scattered along its entire length, with a few scattered spots of more moderate pitting present as well. The bore measures about .577, and is nominally 25 bore, just like a typical P1853 or P1856 Enfield. The gun retains its original front swivel in its correct position on the rear most barrel band, and its original rear swivel in the toe of the stock, at the rear of the iron triggerguard tang. However, the two slotted screw retaining nuts that kept the band tensions screws from being lost are missing, which is not uncommon. The rifle retains its original combination front sight and bayonet lug as well. The original and correct ramrod is missing from the gun, which is not uncommon. A British pattern jag head ramrod is present instead, which is what is usually found in these rifles, although it is not completely correct. The rod is full-length and retains threads at the end. The butt plate and the balance of the iron furniture have the same richly oxidized plum brown patina as the barrel, matching it perfectly. The furniture shows some surface pinpricking, as well some lightly scattered pitting. The stock is in about VERY FINE condition. The stock is solid and full-length and free of any breaks, cracks or repairs. The stock is very crisp and sharp and has never been sanded, although some odd, light scrapes are present here and there on the stock. The edges remain quite crisp and sharp with no rounding to them. The stock has the normal minor bumps and dings from service but shows no abuse, mishandling or damage.

Overall, this is one of the nicest examples of one of these rare Spanish made “Enfield” rifles that I have had the opportunity to offer. This gun is a great example of a contractor produced Spanish rifle that likely has no Civil War relationship or association but is a wonderful example of one of the “Enfield” pattern arms that was so popular around the globe during the mid-19thcentury. This would be a wonderful addition to any collection of 19thcentury European military arms, particularly for a collection that concentrates on Spain and their various holdings during their 19thcentury colonial period.