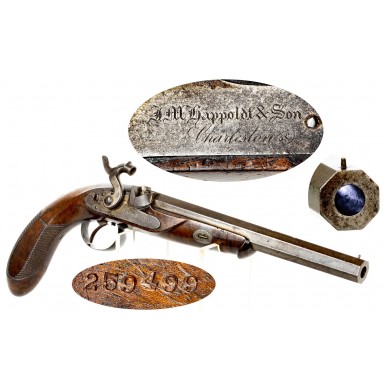 John M. Happoldt was born in in the Kingdom of Württemberg sometime around 1803. At about this same time, the Happoldt family, emigrated to America, locating in Charleston Neck, South Carolina. John’s father was also named John Michael Happoldt, and the elder Happoldt who had been born circa 1773 was a trained butcher. The father quickly established himself in this same trade on Charleston Neck and by 1807 had applied for citizenship in his new country. Apparently the elder Happoldt was rather successful, as the 1820 Census revealed that the household included not only the Happoldt family of six, but also eleven slaves. The elder Happoldt died in 1821 and his estate was distributed, primarily to his eldest son Christopher M. Happoldt. The 1830 Census reveals that the 27 year old John M. Happoldt was established as a gunmaker in Charleston, SC by that time, working at 45 State Street, which was also his home. He spent the next three decades becoming one of the leading gunmakers of the region, producing high quality rifles and pistols, as well as importing arms and marking them with his retailer mark. Many of the imported arms were English and Belgian percussion shotguns. The 1850 Census reveals that JM Happoldt had three sons living in his home, Benjamin G (22), John H (19) and Albert M (17). All were listed as gunsmiths. By the 1860 Census JM Happoldt was listed as having a personal estate valued at some $11,000 (about $343,000 in today’s money). His 29 year old son John H. Happoldt was working as a gunsmith as well, located at 35/36 State Street and was listed as having personal property valued at $3,000 (about $93,500 in today’s money), indicating that he was quite successful as well.

The younger Happoldt would do arms alteration work for the state of South Carolina and the newly formed Confederacy, with the work ranging from repairing guns, altering them to flint, “cleaning & rifling” Model 1842 muskets and altering M1841 “Mississippi” Rifles to accept saber bayonets. The elder Happoldt apparently concentrated on the civilian arms trade during this period and by 1870 had relocated to Anderson, SC. This was likely in an attempt to avoid being in the Charleston area when the Yankee forces came calling. Clearly the war had a catastrophic effect on John M. Happoldt’s wealth, as the 1870 Census revealed that although he had real estate valued at $800, his personal estate had been reduced to $100 from $11,000 only a decade earlier. In 1880, the 77 year old Happoldt was still working as a gunsmith in Anderson. Happoldt died in 1884 at the age of 81.

Offered here is a Southern Dueling Pistol by John M Happoldt & Son of Charleston, SC. The lock of the gun is clearly engraved in a Gothic style: JM Happoldt & Son, over the additional script engraving: Charleston SC, with the “SC” contained in the decorative loop at the end of the “n” in Charleston. Although all three sons are listed as gunsmiths in the 1850 Census, only John H. Happoldt really entered the trade seriously. He officially partnered with his father around 1852 and went out on his own around 1855. Thus, the marking on the lock of this pistol suggests that it was produced during the period 1852-1855. The high quality pistol is about 13.75” in overall length with a 9” octagonal barrel with a hook breech. The bore of the pistol is nominally .41 caliber and the pistol is smoothbore, conforming with the Code Duello requirements that dueling pistols not have rifled bores. Despite the fact that dueling was illegal in most locals in the United States by the 1850s, it was still a regular practice in South Carolina as late as the 1880s! South Carolina actually had its own set of local rules and regulations that were applied to duels. The pistol has an adjustable trigger with a fine quality lock with a fly on the tumbler, allowing for a very crisp and light pull. The lock also has a sliding safety at the rear of the hammer and is secured by a single screw. A fine, drift adjustable, rear sight blade is dovetailed into the top of the breech of the pistol. A narrow iron front sight blade is located about a ¼” from the muzzle on top of the barrel. The pistol has a distinctive stock with carved flats on either side of the grip that flow up to the lock and counterpane. The backstrap and gripstrap of the stock is finely checkered and the pistol has an elegantly carved, smooth Schnabel forend. The barrel is secured by a single wedge with a German silver escutcheon and the hooked breech. An oval German silver escutcheon is located in the center of wrist, left blank for the owner’s initials. The counterpane of the pistol is stamped with the museum accession number 259499 in individual stamps. This old-style numbering system is noted on other historic arms and is considered by most old time collectors to indicate the gun was formerly in the collection of the famous Smithsonian Institute in Washington, DC.

Although there are no visible proof marks, it was likely that based upon the fine workmanship of the pistol, English (or possibly Belgian) proofs would be found under the barrel when it was removed from the stock. However, there were no proofs in that location either, indicating the gun is of American manufacture and was likely produced by Happoldt. Additional research reveals that some years ago an identical configuration .41 caliber Happoldt smooth bore dueler was offered for sale on historic arms dealer Damon Mills’ website. Additionally, a Happoldt marked pistol that appears identical on the exterior, but with a rifled bore, is in the collection of the Charleston Museum in Charleston, SC.

The pistol remains in about VERY GOOD condition overall. It appears to have been browned originally, likely with a color casehardened lock. Now the barrel has a lightly oxidized thin brown patina over smoky gray metal with the lock having a lightly oxidized mottled gray and brown patina. There are a handful of small impact marks present on the barrel from handling and use over the years. The lock markings remain clear and crisp and fully legible. The lock is crisp and functions well on all positions, although the sliding safety is no longer functional. The trigger adjustment does not appear to materially affect the pull weight of the trigger, but the trigger is extremely crisp and light. The hammer screw does not quite match the balance of the gun and may be an old replacement. The smooth bore of the pistol is in VERY GOOD to NEAR FINE condition. It is somewhat mottled with some oxidation and some lightly scattered pitting. The stock of the pistol is in about FINE condition and is quite crisp. The checkering remains sharp as do the edges and lines with no indication of having been sanded. As would be expected the wood shows scattered bumps, dings, minor mars and some impact marks, but nothing beyond some 165 years of handling and use and no indications of abuse.

Overall this is a very attractive, and rather scarce Antebellum Southern Percussion Dueling Pistol by JM Happoldt of Charleston, SC. This would be a wonderful addition to any collection of southern pistols, American duelers or a collection of arms that concentrated on South Carolina and Charleston in particular. I am very sure you will be very pleased to add this pistol to your collection.