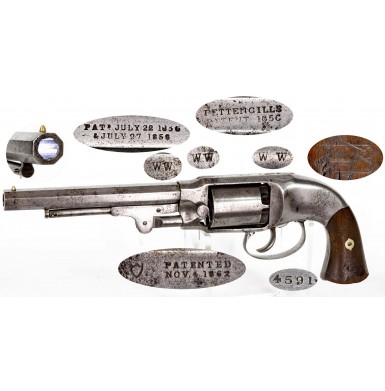 The revolvers of C.S. Pettengill were some of the more unique percussion handguns produced in mid-19th century America. The pistols were manufactured in three sizes, including a small .31 caliber “Pocket” model, a mid-sized .34 caliber “Navy” model and the largest pistol, a .44 caliber “Army” model. The guns all utilized a unique self-cockingaction, which would be referred to as “double action only” today. The pistols had a unique frame profile with a low bore axis and a centrally mounted concealed internal hammer. The “Army” model was a six-shot, .44-caliber “self-cocking” percussion revolver with a 7.5” octagonal barrel that was rifled with six grooves. It had an overall length of 14” and weighed about three pounds.

The initial pistol design was conceived by C.S. Pettengill of New Haven, CT and was covered under US patent #15388, which was issued on July 22, 1856. An additional patent, #21054, was granted to Charles Robitaille and Edward A. Raymond of Brooklyn, NY on 27 July 1858 for refinements and improvements to the original Pettengill mechanism. Although the pistols were known as “Pettengills” and the early production guns are marked with the names of all of the patentees, none of the inventors ever produced any of the guns.  Later production guns bear only Pettengill’s name and all of the associated patent dates. The pistols were actually manufactured by Henry S. Rogers of the Rogers & Spencer company.

Rogers & Spencer started producing the “Pocket” and “Navy” sized revolvers in 1859. The production of the “Army” sized revolvers did not commence until early 1862, when the company managed to secure a contract to provide the .44 caliber pistols to the US government. Through some political wrangling and the application of pressure through influential friends and political supporters, Rogers managed to convince Secretary of War Simon Cameron to support an order of Pettengill Army model revolvers. On 26 December 1861 Cameron ordered General Ripley of the Ordnance Department to place an order for 5,000 Pettengill revolvers at a price of $20.00 each, including appendages. However, the sample pistols did not fare well during testing and evaluation at Springfield Armory. The pistols fouled easily after multiple firings, and this prevented the self-cocking mechanism from functioning correctly. Due to these mechanical issues, it was recommended that the contract be canceled. Rogers & Spencer had roughly $25,000 tied up in tooling and machinery for the production of these large frame revolvers and would have been financially ruined if the contact was completely canceled. Through more political wrangling a revised contract was subsequently agreed to on 27 June 1862, which reduced the order to 2,000 revolvers at the reduced rate of $20 each with appendages. Between June 1862 and January 1863 at total of 2,001 Pettengill Army revolvers were delivered to the US Government. The total production for the Army model is estimated at approximately 3,000 guns. These guns were serial numbered sequentially from the previous “Pocket” & “Navy” series revolvers and were not numbered in their own range.

Rogers & Spencer never completely resolved the mechanical issues that arose during testing at Springfield Arsenal and of the guns delivered to the government approximately 15% were rejected by inspectors. The revolvers did not fare much better in the field than they did in testing, and by late 1863 most Pettengill Army revolvers had been removed from service, having been replaced by more reliable and robust Colt or Remington revolvers. Pettengill Army revolvers were issued to 3rd Michigan, 3rd Missouri State Militia, 5th Missouri State Militia, 1st Arkansas, 3rd Illinois, and 3rd Kentucky Volunteer cavalry regiments.

After the war, the St. Louis arsenal disposed of 196 Pettengill revolvers for $1.75 each on 25 October 1876. In July of 1882 the New York Arsenal sold 525 at an average price of $.27 each. It is not known what happened to the remaining stocks of Pettengill revolvers that were at other arsenals. It is interesting to note that Rogers & Spencer subsequently used much of the tooling and machinery from the Pettengill revolver production to manufacture their own Rogers & Spencer revolvers. A comparison of the two models will reveal that the front of the frame, the barrel and the loading lever assembly are nearly identical. Essentially the Rogers & Spencer design combined this “front end” of the Pettengill with a more conventional and mechanically robust single action mechanism.

The Pettengill Army Revolver offered here is in about GOOD+ to NEAR VERY GOOD overall condition and is one of the relatively scarce martially marked examples. Most Pettengill revolvers encountered today have mechanical issues, particularly with the timing, indexing and lock up of the cylinder. However, the mechanism of this Pettengill Army Revolver remains fully functional. The pistol is marked on the topstrap in the standard fashion. The right side of the topstrap read:

The markings remain mostly legible and clear, although some of the markings are a little light due to service, use and an old cleaning. The pistol is additionally marked in two lines, on the bottom of the frame, forward of the triggerguard:

There is also a {SHIELD} mark stamped on the front edge of the bottom of the frame. The butt of the revolver is serial numbered 4591. This same serial number is also present on the inside the triggerguard. The cylinder has no number on its side and was not removed to look at the rear face due to the fact that the mechanism of these guns is so finicky I did not want to risk the functionality of the revolver. The interiors of both grip panels are stamp numbered 3017, indicating that they were taken from another Pettengill Army Revolver. The pistol retains very clear sub-inspector markings in the metal, with crisp WW initials stamped on the left side of the frame and barrel, as well as on the cylinder. The mark is has been previously attributed to civilian armory sub-inspector William Waters. However, more recent research published by authors Charles Pate and Tony Daum in their book U.S. Military Arms Inspection Marks indicates that this mark is really the “W” of civilian sub-inspector Nathaniel Whiting. Pate hypothesizes that since the “WW” marks are two strikes of the same die, applied individually, that this indicates that the part in question was inspected by Whiting more than once. Pate notes that typically these revolver sub-inspection marks are a single letter, not two letters. He goes on to note that in some cases martially-marked Colt revolvers that had been reinspected or undergone repairs prior to final acceptance were double marked in a similar way. Considering the issues that many of the Pettengill revolvers had passing inspection, it is quite likely that some were worked on at the factory more than once. Records do indicate that some were returned to the factory and were then resubmitted for final acceptance and this double strike of the “W” mark may well indicate this. A legible, if worn, script NW cartouche is also present on the left grip pane, further supporting the Nathaniel Whiting theory. The serial number in the grips is very close to a number of the guns issued to M Troop of the 1st Arkansas Cavalry. This regiment received a large number of Pettengill Army Revolvers that worked so poorly that there are stories of them throwing the guns away in the field, particularly during the Battle of Perryville. As only numbers from Troop M are available, it is quite possible that this revolver was issued to the 1st Arkansas as well and the grips were salvaged from a gun with mechanical issues and installed on this one in the field.

The pistol retains none of its original blued finish and was apparently cleaned long ago. Overall, the pistol has a partly smooth pewter gray patina over most of the surfaces with a mottled salt and pepper appearance in some areas. The metal is partly smooth, with scattered patches of light to moderate peppering and pinpricking, and some small areas of light pitting as well. Most of this is on the forward portion of the frame forward of the cylinder and on the barrel, where the caustic gases that escaped when the revolver was fired cased erosion to the metal. There is also a thumb sized patch of moderate pinpricking on the left rear of the frame, just above the grip junction. The areas of freckled oxidation and surface roughness appear as darker areas on the otherwise gray metal. The bore of the pistol is in about VERY GOODoverall condition, with excellent rifling that remains very crisp. The bore is mostly bright with scattered light pitting along its entire length and showing scattered patches of freckled oxidation and discoloration. The original loading lever is in place under the barrel, and it functions smoothly and correctly, locking securely into place when it is not in use. The original German silver cone shaped front sight is in place at the end of the barrel as well. As noted, the revolver remains mechanically functional in every way. The two-piece walnut grips are in about GOOD condition. The grips have numerous bumps, dings, and mars, as well as some chips of wood missing. The flared shape of the grips makes them very susceptible to chipping and wear along the sharp lower edges. Both grips show moderate chipping, wear, and loss in these areas, along with a chip at the lower rear of the right grip. As noted, the grips are numbered to a different gun. As also noted, a partly legible script NW inspection cartouche is visible on the left grip panel. New research suggests that this is the mark of civilian arsenal arms sub-inspector Nathaniel Whiting who worked during 1862 and 1863 inspecting contract small arms, including Pettengill Revolvers and Savage contract US Model 1861 Rifle Muskets.

Overall, this is a solid, if salty, example of a scarce martially marked Pettengill Army Revolver. The pistol is in good overall condition, showing real world use in the field, and displays well. The gun is 100% complete and period in every way and would be a very nice addition to any collection of secondary US martial Civil War revolvers at a very reasonable price.