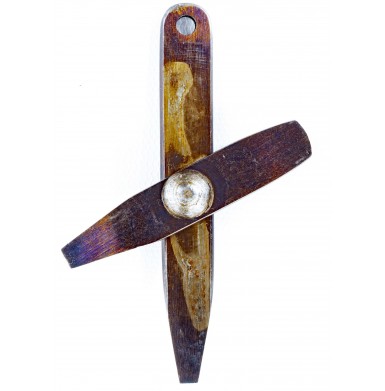 This is a VERY FINE condition example of the scarce Palmer Carbine Combination Tool. The Palmer Carbine has the unique distinction of the being the first bolt-action, metallic cartridge firearm accepted for US military service, and in fact was first firearm of that style to be produced in any quantity anywhere in the world. William R. Palmer of New York invented the gun. Palmer received US Patent #41,017 patent for the bolt-action design on December 22, 1863. Palmer had initially worked as a gunsmith in New York, having been listed in the local directories from 1848 - 1864. Palmer also held a US patent for a tilting breech carbine design (sort of a Hall / Linder hybrid) (#32,887 July 23, 1861), as well as two revolver patents (#21,623 September 28, 1858 & #41,857 March 8, 1864). His carbine design was a single shot, bolt-action gun with a simple and effective bolt locking system. The rear of the bolt was cut with nine coarse (9 TPI) interrupted threads. After the carbine hammer was placed on half-cock, a quarter turn of the small handle at the rear of the bolt (from horizontal to vertical) disengaged the threads and allowed the bolt to be manually retracted. A hook extractor on the bolt would pull the cartridge case out of the breech, making it contact a spring-loaded ejector and tossing the case free of the receiver. A new cartridge could then be inserted in the receiver and the bolt pushed home to chamber it. Turning the bolt handle 90-degrees to the right, from vertical to horizontal, locked the breech of the carbine. The hammer could then be fully cocked to fire the gun or left in the “half-cock” or “safe” position. This same interrupted thread locking system would form the basis of the locking system for most breechloading artillery for the next 100+ years. In the initial design, the chambering of the carbine was .44RF but due to the Ordnance Department’s adoption of the newly standardized .50RF Government Cartridge (56-50 Spencer) cartridge, the chambering of the guns was altered to .50RF. The Palmer design was initially tested by the US military in September and October of 1863. According to the testing officers, the most impressive feature of the design was its ability to automatically eject spent cartridges from the gun simply through the operation of the bolt. The Ordnance Department was sufficiently impressed with the testing to place an order for 1,000 of the carbines on June 20, 1864. As Palmer was unable to produce the carbines, he entered into an arrangement with E.G. Lamson & Company of Windsor, VT to produce the guns. Palmer sold Lamson his patent rights in order to produce the guns. Lamson had been a principle of the firm Lamson, Goodnow & Yale (LG&Y), which had been organized in 1861 to produce rifle muskets on contract for the US government. Lamson, Goodnow & Yale had purchased the majority of the assets of the defunct Robbins & Lawrence Company (also of Windsor, VT) and as a result of the old Robbins & Lawrence English Pattern 1853 Enfield Rifle Musket contract from the Crimean War, had all of the tooling and machinery necessary to produce that arm. LG&Y became one of three firms (including Colt & Amoskeag) to produce the “Special Model” M1861 rifle musket for the US government, a sort of Enfield / Springfield hybrid that had many Enfield features and was easier to produce on the machinery they already had. In 1864 Goodnow & Yale left the firm, and Lamson took sole control. Lamson not only produced the Palmer patent carbine, but also produced the equally rare Ball Patent carbine, during the same time. Due to manufacturing delays, which resulted from the caliber change from .44RF to .50RF, the only Palmer carbine to be delivered prior to the end of the Civil War was a sample gun that had been delivered in May of 1864 in order to help secure the contract. The 1,000 contracted carbines were all delivered on June 15, 1865, some five weeks after General Robert E. Lee surrendered at Appomattox Court House. The end of the Civil War meant that there would be no additional US military contracts for his designs, so Palmer embarked for Europe where he tried unsuccessfully to market his carbine. Palmer made several trips to the continent, and actually died in Germany a few years after the Civil War. Arms historians such as John McAulay have noted that some of his design innovations were utilized in the Krag and Mauser designs that helped define warfare at the end of the 19th and well into the 20th century.

This Palmer Carbine Tool is in VERY FINE condition. It retains about 60%+ of its original, gorgeous, high luster blued finish. The primary loss is due to fading and age where the two tool faces contacted each other when the tool was folded into the flat position. There is also some very minor loss along the high edges and contact points. The edges of the tool remain extremely crisp and sharp with no wear or damage. The tool is completely free of any pitting, nor does it even show any surface oxidation. The small arm is securely attached a large domed rivet. The smaller arm moves and pivots smoothly as it should.

Overall this is a very nice example of a very scare tool, of which only about 1,001 were manufactured. It will be a wonderful addition to the display of your Palmer Carbine and will also be a nice addition to any advanced collection of Civil War era US military gun tools.

Please note that the images are much larger than the actual tool is! This allows you to see condition and details easily.