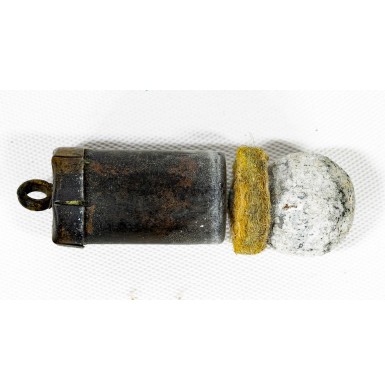 As originally designed, the Model 1851 double action percussion revolvers of Robert Adams had no provision for a loading lever. This meant that tools and accessories had to be carried to load the percussion revolver, which could include a powder flask, loose balls, and a loading rod, simply to charge the cylinder chambers. Adams revolvers would not include an integral loading lever until the advent of the Model 1854 Beaumont Adams Revolver. In an attempt to simplify the process and to make it easier to carry spare ammunition with the gun, Robert Adams developed as semi self-contained cartridge that became known as the “dustbin” cartridge, due to its resemblance to a home rubbish container. The dustbin cartridge included a small copper cylinder that contained the pre-measured powder charge, along with an appropriately sized round ball. The Adams ammunition system cast both the round and elongated balls with a teat at the base of the bullet that was used to secure Adams’ patented fiber wad. The dustbin container had a “lid” at the rear, which was removed when it was loaded into the cylinder chamber, leaving only a thin tissue covering over the powder charge. This was sufficient to keep the powder in the container but could be easily penetrated by the flash from the percussion cap. The round ball with attached wad was then then loaded into the chamber with thumb pressure. When the revolver was fired, the “dustbin” was expelled from the chamber along with the bullet and wadding.

The dustbin cartridges were produced for both Adams revolving handguns and his revolving rifles. Based upon the examples illustrated in Chamberlain & Taylerson’s seminal book Adams’ Revolvers, the cartridges were either unmarked or in the case of the ones produced by Eley Brothers of London, the dustbin’s lid was marked with the Eley maker’s mark. Although not intended to function this way, the cartridge was essentially reloadable. If a fired dustbin was recovered, it could be refilled with powder and used again; either as a way to add a measured powder charge to the cylinder without using the bin itself a second time or by reusing the dustbin without the paper covering at the rear.

Offered here is a rare Eley Brothers marked example of an Adams Dustbin Cartridge. The cartridge was probably for a revolving rifle as the ball is nominally 30-Bore, or about .54 caliber. The top of the dustbin lid is embossed in a circle around its outer edge:

As noted, the roundball bullet measures nominally .54 caliber, which is the British equivalent of 30-Bore. The bullet has an Adams Patent fiber wad attached to the teat at the “rear” of the ball and this wad measures nominally .57” and about .14” thick. The “dustbin” powder reservoir measures .91” long with the lid in place and has an outer diameter of .50”. The overall length of the complete “cartridge” is about 1.75” including the tiny ring shaped handle on the cover that closes the dustbin.

The dustbin portion of the cartridge has been fired but remains in VERY GOOD+ to NEAR FINE condition. The brass container has a dark patina that includes powder discoloration, leaving much of the brass a nearly black color. The raised embossed marking on the lid of the container remains clear and fully legible. The container retains traces of the original tissue paper inner covering along the edges of its rear, which are visible when the lid is removed. The Adams patent lead round ball is heavily oxidized with a flaky white coating over most of the gray lead. The fiber wad remains attached to the teat at the tail of the ball and is in very nice condition as well.

Overall this is a very nice, essentially complete example of a scarce Eley Brothers Adams Dustbin Revolving Rifle Cartridge that displays very well. The only way the cartridge could really be improved upon would be to find an unfired one that retains the powder and tissue paper in the brass cylinder. This would be a wonderful addition to any ammunition collection, or to display with your Adams revolving rifle, or even a big bore Model 1851 Adams Revolver, to show the most efficient way that Adams percussion revolver ammunition was carried before the advent of the Model 1854 Beaumont Adams and the attached loading lever.