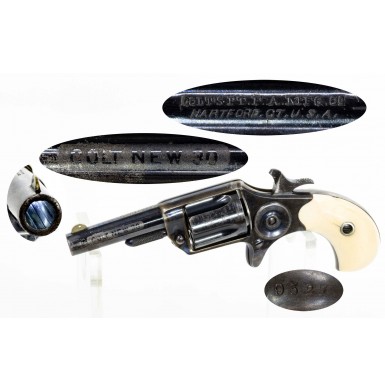 At the close of the American Civil War the Colt Patent Firearms Company was aware of two facts that would greatly impact their business practices for the next decade. First, the end of war not only meant no more major US military orders for handguns in the foreseeable future, but it also meant that thousands of surplus US military percussion revolvers would soon be flooding the market, making newly made percussion revolvers difficult (if not impossible) to sell. Second, the day of the percussion revolver was over, and the new self-contained cartridge handgun was the wave of the future. Unfortunately for Colt, Smith & Wesson held the exclusive rights to Rollin White’s patent on the bored-through cylinder, which meant that until that patent expired in 1869 there was no easy way for Colt to manufacture a traditional cartridge revolver without infringing upon that patent. The first of the Colt “bored through cylinder” cartridge revolvers to be offered in 1870, after the expiration of White’s patent, were not alterations of existing models, but were two completely new product lines, the .22RF Colt Open Top and Colt Cloverleaf House pocket revolvers. The Open Top series of arms continued the traditional Colt percussion revolver assembly practice of utilizing three basic parts to assemble the gun, the frame, barrel, and cylinder. The Open Top, as the name implied had no top strap and the barrel was secured to the frame with a wedge as it had been with the percussion guns. The Cloverleaf House revolvers, however, utilized a solid frame and top strap with the barrel screwed into the front of the frame. This basic construction technique would become the standard for all future Colt revolver production. With the introduction of Colt’s iconic Model P, the 1873 Single Action Army revolver in 1873, it was clear that even though the Open Top and Cloverleaf House series had been rather successful (over 114,000 Open Tops were produced with between 1871 and 1877 and just under 10,000 Cloverleaf House revolvers were manufactured between 1871 and 1876), Colt needed to bring a new series of modern pocket pistols to market that included the various design advancements provided by the Single Action Army, and also to compete with Smith & Wesson, and the numerous cheaply made “Suicide Special” revolvers that were already available for those who were looking to purchase a pocket pistol for protection.

The new series of Colt pocket revolvers was dubbed, ironically, the New Line series. These guns were designed by William Mason of Colt and were covered under US Patent Number 155,095. Mason was the man responsible for many of Colt’s early cartridge revolver designs and alterations. The solid frame New Line series was introduced in 1873 and was available in five frame sizes, dependent upon the five basic chamberings of the gun. The revolvers were actually available in eight different calibers, including .22RF, .30RF and .32, .38 and .41 calibers; with the last three calibers available in either rimfire or centerfire ignition systems. The single action pocket revolvers had five shot cylinders and were available with barrels ranging from about 2 ¼” to 10” in length, with the shorter barrels tending to predominate as these were, after all, pocket guns. The single action revolvers had spur triggers with bird’s head shaped grips to increase their concealability. The standard finish was nickel plating with high luster nitre blued hammer and trigger surfaces and screws. Blued barrels with nickeled frames were available as well as blued revolvers with color casehardened frame. Custom finishes including gold and silver washes were also options if the customer was willing to pay the price. Standard grips were two-piece varnished rosewood, but other exotic materials like ebony, mother of pearl and ivory were available for an extra charge as well. Interestingly, walnut, which had been the mainstay of Colt grips since the inception of the company, was rarely used on the New Line revolvers.

Most of the New Line revolvers were produced in two models. The “First Model” had shorter cylinder flutes than the “Second Model” and the cylinder locking notches are located behind the flutes on the sides of the cylinder at the rear. The “Second Model” revolvers has much longer flutes, with the locking notches relocated to the rear face of the cylinder. One exception to this rule was the .30 Rimfire New Line revolver, which was only manufactured with the “Second Model” type cylinder, even though this revolver was only produced during the “First Model” period. Most models had their caliber or chambering acid etched onto the left side of the barrel, with the exception of the earliest production larger frame revolvers. As with most pocket pistols of the era, the .22 rimfire variant, with the smallest frame, was the most popular and some 55,343 were manufactured between 1873 and 1877. The .30 rimfire version, with the second smallest frame was only produced for three years, from 1874 to 1876, with some 10,946 being produced. The .32 caliber sized frame was produced from 1873 to 1884, with some 22,000 revolvers being produced in both rimfire and centerfire versions. The next-to largest frame size was chambered for .38 caliber (again in either rim or center fire) and was manufactured from 1874 to 1880 with about 5,500 being manufactured. The .38 caliber guns were serialized in the same range as the largest frame, .41 caliber guns. The .41 caliber revolvers were also available in either rim or center fire versions, with some 9,363 guns being produced between 1874 and 1879.  The total production of all frame sizes other than .22 was nearly 10,000 units fewer than the .22 caliber guns alone, attesting to the popularity of the smallest of the New Line family. In the end, it was Colt’s development of the 1877 series of double action revolvers in .32 Colt (Rainmaker), .38 Colt (Lighting) and .41 Colt (Thunderer) that brought production of the New Line revolvers to an end. The new small frame, double action revolvers were such an improvement over the single action spur trigger New Line guns, that the sales dropped of precipitously after the introduction of the 1877 revolvers. As the Model 1877s were available with short barrels for pocket carry, the customer who wanted a Colt for protection simply bought the new design. The other death knell for the New Line series was the continual influx of cheaply made “Suicide Special” pocket revolvers on the market. Colt simply could not compete price wise with these cheap and often unsafe handguns. As Colt was not willing to sacrifice quality in order to meet the price point of the competitors, they simply could not compete in that market and remain economically viable.

Offered here is a VERY FINE condition example of a rare blued and color casehardened, Colt New Line .30 RF Pocket Revolver. The New Line .30 revolvers had the next to smallest of the New Line frames and was the frame size produced for the shortest period of time. The 30RF guns were only manufactured from 1874 to 1876, with 10,946 being manufactured during that time, making it one of the less common variants. The revolver has the traditional Colt “acid etched” panel on the left side of the barrel that reads:

This legend allowed the same marking to be applied to either the rimfire or centerfire versions of the revolvers, although in the case of the .30 caliber guns, only a rimfire version was produced. Although this revolver was produced during the “1st Model” production period, it has the long cylinder flutes and locking notches on the rear of the cylinder like the later 2nd Model guns. The top of the 2 1/8”-long round barrel is clearly roll marked in two lines:

The four-digit serial number 9527 is stamped on the bottom of the grip, indicating it was one of the last New Line .30RF revolvers to be manufactured. The matching serial number is also present under the barrel, concealed by the long, knurled cylinder pin, and on the rear face of the cylinder with the numbers stamped between the chambers. A very tiny stamp that reads 30 CAL is present vertically behind the upper right section of the recoil shield. As noted above, the revolver is in about VERY FINE condition. It retains about 90%+ of its original blued finish on the barrel, about 95%+ on the cylinder with about 85%+ vivid color case hardening on the frame. The barrel has flaked and oxidized slightly resulting in some finish loss near the muzzle on the left side of the barrel, with the loss blending into the etched panel. There is also some finish loss under the barrel due to scuffing from removal and insertion of the cylinder pin. The colors on the frame are really lovely with attractive mottling and mostly vivid color that is more vibrant on the right side than the left. The backstrap shows the largest area of finish loss, where the case coloring has thinned and worn to a lightly oxidized plum brown patina. The metal is almost entirely smooth and free of any pitting, although there are some tiny scattered areas of pinpricking present. There is also some scattered surface oxidation and flecks of oxidized surface scale are scattered on the frame and cylinder. All markings in the metal are crisp, sharp, and fully legible. The top of the hammer retains most of its original bright niter blued finish, with the sides of the hammer retaining most of its brightly polished finish. The niter blued trigger retains some strong traces of its original finish as well but is has dulled and faded significantly and retains only some traces of vibrance. The screws all retain at least strong traces of their niter blued finish as well, with some still quite vibrant and others duller and more faded. The nitre blued cylinder arbor pin retains much of its bright blue as well, with the balance a dusky bluish patina. It retains very crisp with sharp knurling. The bore of the revolver is in about FINEoverall condition and is mostly bright with crisp rifling, showing only some minor pinpricking and oxidation along its length with some light pitting near the muzzle. The original German silver front sight is in place on the barrel near the muzzle and has a tiny hole drilled through it. The purpose of the hole is not immediately clear but may have been to allow the attachment of a watch chain, allowing the pistol to function as a large fob. The revolver is mechanically FINE and functions correctly on all positions. The revolver indexes, times and locks up exactly as it should. The revolver is mounted with a lovely set of two-piece period smooth ivory grips that are in FINE condition as well. The grips are not marked or numbered on their interiors, but they fit the gun perfectly and show wonderful age. The grips have a gorgeous creamy appearance with some darker patches of yellowish-brown on the right grip. Both are solid and free of any breaks or repairs. There are some tiny “grain” cracks in the grips, typical of period ivory. The grips do show some light handling marks, as well as some miniscule areas of wear and minute surface chipping at the bottoms where they meet the frame. Although they are not marked, the quality and fit of the grips suggests that they are either factory original or were added by the retailer who sold the gun. They are really attractive and offer a very pleasing contrast to the rich blue and color casehardened finish of the gun’s metal.

Overall, this is a really wonderful example of one of the less common Colt New Line Revolvers. The gun is 100% complete, correct and period and retains the large majority of its original blued and color casehardened finish. With less than 11,000 of these little revolvers manufactured over the three-year period form 1874-1876, the little .30RF guns can be hard to find for sale. As most of the production was nickel plated, these stunning blued and case-colored guns are even less often encountered. The fact that this one has a wonderful pair of period ivory grips makes it even more attractive and desirable. This is a wonderful example that is worthy of being added to any advanced collection of New Line Colt revolvers.