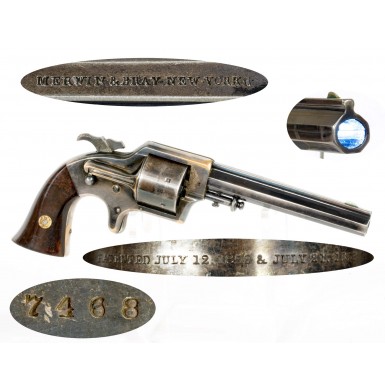 This particular revolver is a Third Model revolver, which were produced in the 700-8000 serial number range. The 3rdModel guns were made in two types, the majority were the standard or “Heavy Framed” version in the 700-6800 serial number range, with the last guns produced with a lighter, thinner frame and a “pinched” site groove in the top strap. These “Light Frame” Type II 3rdModel guns were produced in the 6800-8000 serial number range. These guns had a slightly lighter, narrower frame with a narrower ejection groove on the right side of the frame, forward of the cylinder and a “pinched” sighting groove in the top strap that narrowed at both ends. Most of the Plant “Army” sized revolvers were manufactured with silver plated brass frames, with the exception of about 150 later 1stmodel guns and about 450 2ndmodel guns. All of the pistols were single action revolvers with a sheathed spur trigger. The cylinder and ribbed octagon barrel were blued, with 6” being the nominal barrel length, but with variations known from about 5” through 6” being somewhat common. The grips were two-piece, secured with a single screw through a pair of brass escutcheons and were made of either varnished walnut or rosewood. The grip panels were typically stamp-numbered to the gun on their interiors. The unique “front loading” cylinder design was an attempt to evade the Rollin White “bored through cylinder” patent, which Smith & Wesson held the rights to. A manual ejector rod was mounted on the right side of the frame, which was used to push empty cartridge casings out through the front of the cylinder’s chamber mouths. The gun was about the same size as Colt Model 1849 Pocket revolver but was much easier to reload and packed more firepower into the same sized package. As a result, the Plant’s Manufacturing Company Front Loading “Army” Revolver became a popular choice for the armed citizen and military officer of the mid-1860s. The robust design was much stronger than direct competitors like the Smith & Wesson #2 “Old Army”, and the .42 cartridge packed more punch than the Smith & Wesson in .32 rimfire.

This example of a Type II Third Model Plant “Army” Revolver is in VERY FINE condition overall. This is the later production 3rdModel gun with the “Light Frame”, pinched sighting groove and narrow ejection groove. The bottom of the brass grip frame is serial numbered 7468 and the matching serial number is stamped inside the rosewood grip panels. The top rib of the barrel is clearly marked in a single:

Unlike the earlier production revolvers, no “Plant Manufacturing Company” markings are present on the gun. The cylinder is crisply and clearly marked in a single vertical line:

The 5.25” ribbed octagon barrel retains about traces to 70%+ of the original blued finish, with some fading and dulling. Most of the loss is high edge wear, along the top rib, at the muzzle and along the sides of the barrel. More blue is present in the protected areas. Where the finish has worn there is a medium pewter patina with smooth metal and no pitting is present on the barrel. The cylinder retains about 25%+ of its original blue, with a mottled gray and plum patina on the metal where the finish has worn. The cylinder shows some lightly scattered surface oxidation as well as some very minor pinpricking, primarily around the chamber mouths. The case hardened hammer retains about 30% of its original case colored finish, which had dulled and muted to a mostly dark, mottled bluish-brown patina. The brass frame retains about 60%+ of the original silver plated finish which is heavily tarnished and has an overall blackish patina. The plating shows thinning, wear and loss commensurate with the balance of the revolver. The loss is most prevalent on the backstrap, the top of the frame and the front edge of the frame, where the brass has been exposed. The exposed brass has a lovely, dark butterscotch patina. The pistol functions perfectly and is in mechanically excellent condition. The gun times and locks up perfectly and the frame mounted ejector rod functions smoothly, exactly as it should. The bore of the revolver is in about FINE and is mostly bright and retains very crisp rifling. There is some lightly scattered oxidation and pinpricking present in the bore, which is scattered along its entire length, mostly in the grooves. The two-piece rosewood grips rate about VERY FINE and retain about 50%+ of their original varnish. The grips are complete and solid, with no breaks, cracks or repairs noted. The grips do show some minor bumps, dings and bruises from carry and use but show no abuse or excessive wear.