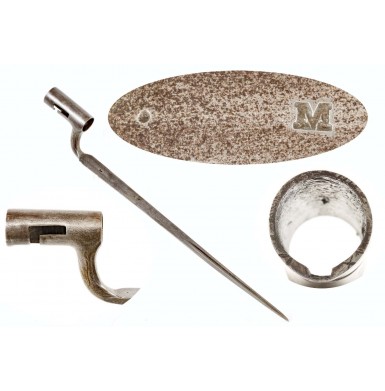 This is a very nice example of an early State of Maryland marked US 1798 Contract Socket Bayonet. As is typical of most of these bayonets, delivered in conjunction with the US 1798 contract muskets, it is essentially unmarked with no indication of who the contractor that produced the bayonet was. As far as manufacturing marks, the bayonet shows only a simple punch dot on the ricasso as a proof or hardness test, and some Roman numeral type marks on the rear edge of the socket that are likely workman’s marks. The important mark is the deeply struck M on the face of the blade, about 1 ½” from the neck of the bayonet. As is typical of 1798 socket bayonets from the middle of the first decade of the 19thcentury through the end of their production, the socket includes a rudimentary bridge. The bayonet, as with mode 1798 contract bayonets, is cut for a top stud.

The bayonet has the following dimension:

As is typical for bayonet of this period, the blade face is flat with a pronounced spine along the rear of the blade. As noted, the rudimentarily bridged socket is cut for a top lug with a two-step “Z” shaped mortise. A wavy diagonal weld line is present in front of the “M” mark, showing the transition from the iron socket, shank and rear portion of the blade to the steel of the forward part of the blade.

The bayonet remains in about NEAR VERY GOOD condition. It has a dull, smoky gray patina with evenly scattered pinpricking and light pitting over much of the metal. There is oxidized discoloration scattered over the entire bayonet as well, giving it a “salt & pepper” appearance. As is so often the case on these bayonets with iron and steel components, the iron socket and shank show slightly more light pitting and discoloration than the steel blade does. The bayonet shows some minor bending and deformation in the last 3” to 4” nearest the tip. This is not uncommon for bayonets of this period as the tempering of the blades was inconsistent at best. The bayonet remains solid and complete, shows no indication of having been shortened and is of course, fully functional.

This would be a solid addition to any Maryland marked US 1798 Contract Musket with a top bayonet lug. It would also be equally at home in any collection that centers on Maryland marked items or War of 1812 era weapons. These Federal Era, state marked socket are rather scarce and this is a rather nice example with good eye appeal.