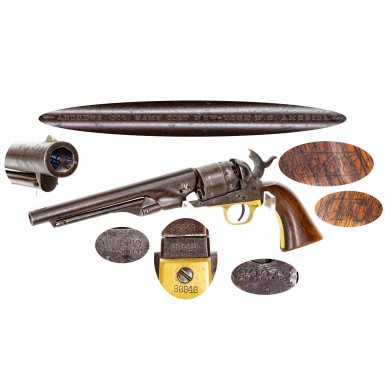 There is probably no more iconic revolver from the American Civil War era than the US Model 1860 “Army” Percussion Revolver produced by the famous Colt Patent Firearms Company. More Colt “Army” .44 revolvers were purchased by the US military during the course of the war than any other model. Many of the thousands of M1860 “Armies” sold commercially during and immediately before the war likely saw service in the field as well, in the hands of both northern and southern soldiers. The revolver was developed by Colt to provide a smaller, lighter, and more streamlined replacement for the .44 caliber “Dragoon” series of revolvers. The revolver essentially utilized the smaller Model 1851 “Navy” revolver frame, coupled with a slightly larger, iron backstrap, an 8” .44 caliber barrel and a rebated, 6-shot cylinder that allowed the .44 cylinder to fit on the .36 caliber frame. While some early production M1860 Army revolvers had non-standard features like 7 ½” barrels and fluted cylinders, these guns were produced in very limited quantities and are typically only encountered under serial number 5500 or so.

Colt produced some 200,500 Army revolvers between 1860 and 1872, making it one of their most successful handgun designs of the 19th century. During the course of the American Civil War, the US Ordnance Department acquired some 127,157 Colt M-1860 Army revolvers by direct contract with Colt. These guns were delivered between 1861 and 1863, with no deliveries in 1864 or 1865. Delivery totals for 1861 were 14,500, with 53,702 and 58,955 delivered in 1862 and 1863, respectively.  An additional 2,027 M1860 revolvers were acquired on the open market by the Ordnance Department from Joseph C Grubb & Co (963) and B. Kittredge & Co (1,064). The initial Ordnance Department contract listed the Colt Army revolvers at a per unit price of $25 each. Subsequent orders were at the much more reasonable prices of $14.50 and $14.00 each, respectively. The fire at the Colt plant in 1863, and the fact that Remington offered to deliver their “Army” revolvers at a price of just under $12.00 each, were the determining factors for the Ordnance Department deciding not to issue any further contracts to Colt for their 1860 Army revolver at the end of 1863. Even so, the Ordnance Department acquired nearly 65% of the total Colt M1860 Army production. More Colt .44 caliber revolvers were acquired by the US military than any other revolver during the course of the war, although the 115,557 .44 caliber revolvers delivered by Remington places that company’s revolver a very close second.

The Colt Model 1860 Army Revolver offered here is in about GOOD+ to NEAR VERY GOOD condition. The gun is a mid-war production “martial” revolver, manufactured early in 1863. The revolver is well marked throughout and has all matching serial numbers, including the wedge. The revolver is serial number 88848, which indicates that it was produced early in Colt’s 1863 production, which ran from approximately #85,000 to #150,000.  It is also one of the 58,995 revolvers delivered by Colt to the US military during 1863. The serial number appears in full on the bottom of the barrel, frame, triggerguard and butt, with the last four digits “8848” on the cylinder, the wedge, the cylinder arbor pin, and inside the backstrap groove of the grip, written in period ink. The gun has a nice, “real world use” look it, with a thickly oxidized plum brown patina over it most of the metal and showing some mottled spots of darker oxidation and age discoloration. The gun retains no finish to speak of, but some faint hints of case coloring are apparent on the frame as darker mottling and spotting and a tiny fleck or two of blue can be seen under strong light in some protected areas. The metal of the gun is partly smooth but there are some scattered areas of light surface oxidation and minor pinpricking as well as some light pitting scattered over the entire revolver as well as a few areas of more moderate pitting. More significant pitting is present on the last 2”-3” of the barrel and on a thumb-sized patch on the cylinder. The revolver also shows the scattered impact marks that are typical of a military carried revolver, especially around the wedge slot. The wedge spring is broken and missing. Due to the heavy use the gun has seen the barrel to frame became a little loose without the wedge spring, so the wedge was inserted in the gun from the wrong side, to make the gun tighter. While the wedge can be removed and installed “correctly” the wedge is loose and apt to fall out installed that way, so I have left it installed backwards, as it appears to have been during the period of use. The gun shows all the signs of significant use, with heavily oxidized cylinder chambers and cone recesses that show accumulated dirt, debris, and moderate pitting. The cylinder retains all the original cones (nipples), and they remain in good, serviceable condition. The rear of the cylinder retains none of the safety pins, as they have all been worn away or battered into submission, but traces of their existence are still visible. The barrel address is clearly legible and reads in a single line:

The cylinder is marked COLT’S PATENT No 8848 over PAT. SEPT. 10th 1850. The cylinder retains about 65%+ of the original roll engraved Mexican War naval battle cylinder scene. There are areas of scene that remain quite sharp and vivid, while other areas are somewhat fainter and thinner, probably from holster wear and carry. The lower left-hand portion of the frame is marked COLT’S / PATENT in two lines. The revolver shows the usual assortment of military sub-inspector marks throughout, with a small C on both sides of the barrel near the forcing cone, as well as on the cylinder in two places. The triggerguard, backstrap and bottom flat of the grip all bear a small D. The mostly legible script JTcartouche of principle arsenal sub-inspector John Taylor is present on the right side of the grip with a clearer script EMCsub-inspection cartouche present on the left side of the grip, the mark of Edward McCue. The gun is in very good mechanical condition, and times, indexes and locks up exactly as it should, with action remaining fairly crisp. The creeping style loading lever functions smoothly as well, and locks into place when not in use with only minor wobble. The bore of the pistol is in about GOOD condition and retains crisp rifling. The bore is dark and heavily oxidized with some scattered surface rust that might clean out. The bore also shows moderate pitting scattered along its length, with a few more serious patches of pitting, along with accumulated dirt and grime. A good scrubbing might improve the bore somewhat.  All the screws appear to be original. The screws all show moderate slot wear, a patina that matches the gun well, and wear commensurate with the balance of the revolver. The one-piece brass gripstrap and triggerguard has a lovely, medium golden patina. The one-piece wood grip rates NEAR VERY GOOD and again, matches the condition of the balance of the gun well. As previously mentioned, the grip is numbered to the gun in ink, in the backstrap recess, and both cartouches remain fully visible. The grip is solid and shows no breaks, cracks, or repairs. The grip does show numerous scattered handling bumps, dings and even a couple of minor chips. The sharp points of the leading and trailing edges of the grip are worn, and the right lower edge shows an old chip missing.

Overall, this nice, attractive, complete, and original example of a well-used Colt Model 1860 Army Revolver. The gun is well marked and very good mechanically with a nicer set of grips than are normally found on guns that saw this level of use with nice cartouches. It is all matching and has the very pleasing, untouched and evenly worn appearance of a real combat handgun that served over 150 years ago. Every Civil War arms collection needs at least one Colt Army, especially a martially marked one, and this is a very decent, no excuses example that is all original and correct. This is a really solid Colt Army that will display very nicely and will fill that gap in your collection, without costing an arm and a leg.