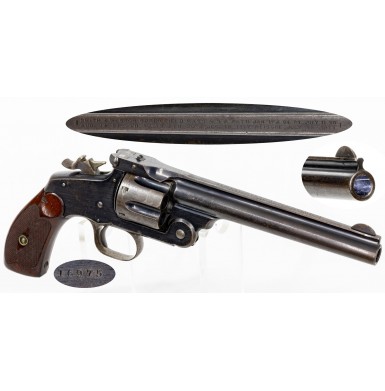 In 1878 Smith & Wesson introduced a new, refined version of their successful Model No 3 First Model revolver. The Model 3 had been introduced in 1870 and would eventually be known as the “First Model American” to differentiate it from the Russian model that would be based upon the No 3 “American”. The Model 3 was Smith & Wesson’s first large frame, large bore revolver and introduced the primary feature that would define most of the large frame Smith & Wesson revolver production through the end of the 19th century. The gun was a six-shot, single action revolver chambered for the .44 S&W American cartridge. It had an 8” ribbed barrel and featured a top-break action with simultaneous extraction via an extraction star that was actuated by opening the action and pivoting the barrel downward. The Model 3 had the distinction of being the first cartridge revolver to be adopted by the US military that was not an alteration from percussion. The revolutionary design caught the attention of military powers around the world and very soon the Russian government approached Smith & Wesson about a contract for the revolvers in a slightly more powerful .44 caliber cartridge that would become known at the .44 Russian. While only about 8,000 of the original “First Model American” Model No 3 Revolvers would be produced between 1870 and 1872, the revolver spawned an entire series of guns. A slightly improved variant of the revolver was introduced in 1872 as the Model No 3 Second Model, and it was from this production that the first Russian contract guns were delivered, known to collectors today as the “Old, Old Russian” model. Over the next few years contracts from Russia and Japan continued to come in, resulting in variations and improvements in the Model 3 design. Additionally, the US military adopted a .45 caliber variant for limited use, with a modified barrel catch assembly developed by US cavalry Major George Schofield, and these guns would become known as the 1st and 2nd Model Schofield revolvers.

By 1878 the success of the Model No 3 was quite clear, and a refined variant was introduced, designated as the New Model No 3 or “Model No 3 New Model”, which was also referred to as the “.44 Single Action” in some company literature. Like the original Model No 3, it was a six-shot, single action revolver with a top break design and simultaneous extraction. While the original No 3 was only offered in only two barrel lengths, 8” as standard and 6” on special order, the New Model was offered in a variety of standard barrel lengths including 3 ½”, 4”, 5”, 6”, 6 ½”, 7”, 7 ½” and 8”. The barrel was tapered with full-length rib and a pinned front sight. Standard sights were a fixed notch on the top of the barrel latch and a rounded front sight. Target sights were available as an option with an adjustable rear sight and a square cut front bladed pinned into the rib instead of the round blade found on the fixed sight guns. As with the original Model 3, the standard finishes were either blued or nickel plated with color casehardened hammers, triggerguards and triggers. The standard grips were either two-piece checkered walnut or checkered black hard rubber. Some of the very late production guns shipped circa 1907 and later had Smith & Wesson medallions in their wood grips. As with any Smith & Wesson of the period a wide range of special features, factory options and upgrades were available for the revolvers, ranging from custom finishes and grips to engraving, special sights and extension stocks to turn the guns into ersatz carbines. While the standard chambering for the revolvers was .44 Russian, other calibers could be custom ordered and factory records indicate that the revolvers were produced in at least thirteen other calibers, ranging from as small as .32 S&W and .32-44 S&W to .44 Henry, and as large as .45 Schofield, .45 Webley and .455 MkI and MkII. Due to the wide variety of options available for the New Model No 3, a rather large collection would be necessary to cover the major types and variations of this revolver. Factory records indicate that 35,796 of the revolvers were produced between 1878 and 1912, with some of those guns going to Japanese military contracts, the Australian Colonial Police as well as the ordnance department of the State of Maryland.

Offered here is a FINE condition example of a mid-production Smith & Wesson New Model No 3 Revolver in .44 Russian with a 6 ½” barrel. The revolver is serial number 16975, placing it almost dead center in the production of 35,796 revolvers. While Smith & Wesson New Model No 3 serial number lists are not readily available like Colt serial numbers for the purposes of dating the production of the guns, this one was probably produced in the mid-1880s. The Australian contract guns fall in the 12,XXX to 13,XXX range and date to circa 1880-1881 and an 1890 US government purchase of 63 of the guns includes #23,876 as the lowest numbered gun, which had to be produced no later than 1890. Other known dates and numbers include #24,484 which was sold to Annie Oakley on April 25, 1888, and #19,871 which was sold to Ira A. Paine (known as the “Master Shooter of the World” during the period) on March 4, 1889. Based upon this information a mid-1880s production period seems quite correct for this revolver. The revolver has the matching serial number 16975 on the bottom of the butt and under the barrel locking catch. However, the rear face of the cylinder is numbered 9042. Interestingly, nearly every New Model Number 3 revolver I have ever had has had a mis-matched cylinder, suggesting that there may have been a design issue with the cylinder, maybe in the way the cylinder ratchet wore as the gun was used. Excessive wear would affect timing and could be quite problematic if the wear became severe. The revolver is unmarked externally with the exception of the serial number on the butt and the two-line address and patent date information rolled on the top of the barrel rib. It reads:

The two-line mark is flanked by a pair of Maltese crosses.

As noted, the gun remains in about FINE condition and retains much of the original blued finish. The gun rates a strong 55%+ in terms of remaining finish, with about 25%+ on the barrel, 75%+ on the frame and 25%+ on the cylinder. The largest areas of wear and loss are on the backstrap and grip strap, which retain only minute traces of blue. In all cases the blued has thinned and worn from carry and use with the blue on the barrel mostly worn from the sides and remaining brightest in the protected areas around the barrel rib and on the bottom of the barrel. The loss on the cylinder is around its periphery with the brightest blue in the cylinder flutes. In all cases, the areas where the blue has thinned and worn a lightly oxidized dull grayish-brown patina has developed with some minor oxidized mottling. The metal is almost entirely smooth with some scattered light surface oxidation shot through the remaining blue and some freckled minor surface roughness here and there. The color casehardened hammer retains about 70% of its vibrant colors and mottling with the balance dulling to gray. The triggerguard is mostly a mottled and lightly oxidized brown and gray patina with no case color present and the trigger retains only traces of color. The revolver is mechanically fine and it times, indexes and locks up tightly. The rebounding hammer operates correctly as well. The top break action and extractor operate crisply and correctly as well. The bore of the revolver rates about FINE and is mostly bright with fine, crisp rifling. The bore shows some scattered light oxidation and some very minor scattered pitting along with some frosting in the grooves. The revolver is equipped with the standard factory fixed sights and the rear notch and pinned front blade remain in place. The grips rate about FINE as well and are a very attractive pair of checkered walnut with a nice reddish tone to them. The grips are unmarked on their interior but fit the revolver perfectly and show wear commensurate with the condition of the revolver. The grips are crisp with fine checkering and show only the expected light wear with scattered minor bumps and dings and some minor flattening to the checkering.

Overall, this is a really attractive and very crisp example of a lovely “old west” era Smith & Wesson New Model No 3 Revolver. The gun is a classic example of the full refined version of the venerable Smith & Wesson Model No 3 and was produced during the mid-1880s when the west was still “wild”. The gun is well marked, fully functional and is a very nice example. If the cylinder were not mismatched it would easily rate “very fine” or better due to the large amount of finish that remains. It is worth noting that the wear and remaining finish on the cylinder match the gun so well that I really believe the cylinder was exchanged during the period of use. This would be a lovely addition to any collection of old west era revolvers as well as quality collection of 19th century Smith & Wesson revolvers, and I am sure you will be quite pleased with it.